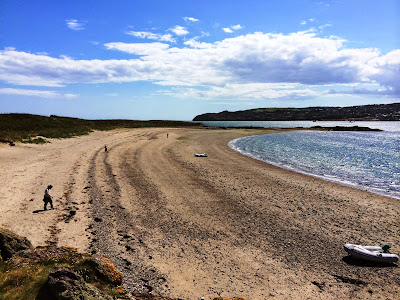 Ireland’s Eye is just a mile off the coast from Howth, but feels like a seldom-visited island in the Mediterranean (Photograph: Patrick Comerford, 2014)

The summer sun returned for today’s bank holiday [4 August 2014] and two of us booked a Dublin Bay Cruise at 1 p.m. from Howth to the City Centre on board the MV St Bridget, and contemplating the option of then continuing on to Dun Laoghaire.

However, we were sadly disappointed when we arrived at the West Pier to find the 1 p.m. sailing had been cancelled because of a technical malfunction at the bridge on the Liffey. It was no fault of the operating company, Dublin Bay Cruises, and we plan to take the option of rebooking on another day. 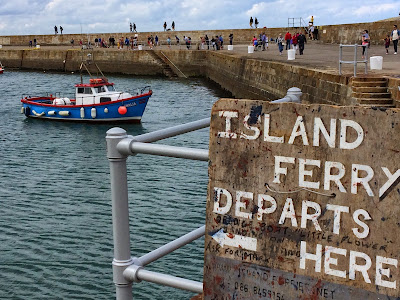 We were heading back to find a light lunch when accidentally we came across a sign on the East Pier advertising boat trips to Ireland’s Eye, the tiny, uninhabited island a mile immediately north of Howth.

Ireland’s Eye is only 21.5 hectares in size, and a number of boats run by two local companies leave the East Pier in Howth regularly throughout the day during the summer months. 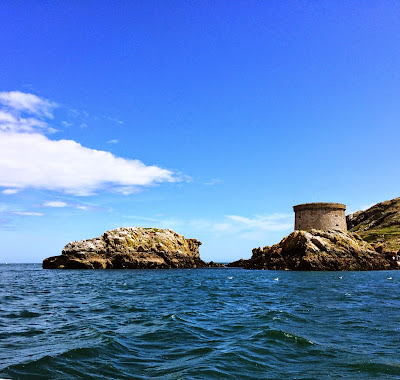 The journey took only 15 minutes. As we left Howth Harbour, there were views first to the beach at Sutton, and then out to sands of Portmarnock and Malahide. Soon we could glimpse the towers at Portrane, before Lambay Island came into sight.

We were brought around the west side of Ireland’s Eye to the north side of the island to disembark at a flight of tiny steps on the rocks beside the 200-year-old Martello Tower.

The tower has a window five metres above ground level, but children were scaling up and down the side on a rope hanging from the window that gave them access to the inside of the tower. 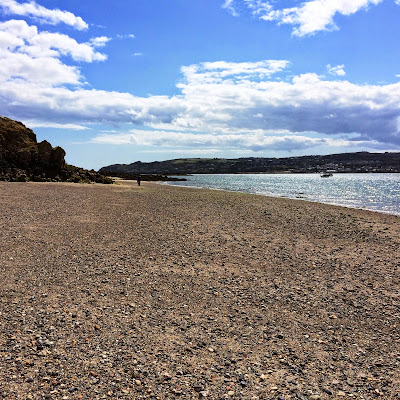 We climbed back down the cliffs to the south side of the island, and walked along the cliff-edge walks leading down to a series of four or five beaches along the length of the south and west coasts of the island.

Some of these beaches are little more than sand-covered tiny coves, others are as picturesque and as beautiful as beaches in Achill and Connemara that are promoted as typical Irish beaches. 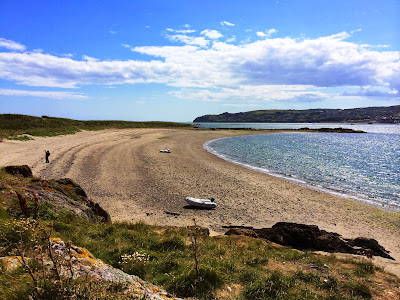 In the warm summer summer sunshine, this could have been Greece, Turkey or Italy (Photograph: Patrick Comerford, 2014)

They include some of the few west-facing sandy beaches on the east coast of Ireland, and in today’s warm summer sunshine it felt like being on a remote island in Greece or off the coast of either Turkey or Italy, with all the fun of island hopping.

At the east end of the island, we came to a range of rocks that links Ireland’s Eye to the tiny islet of Thulla. 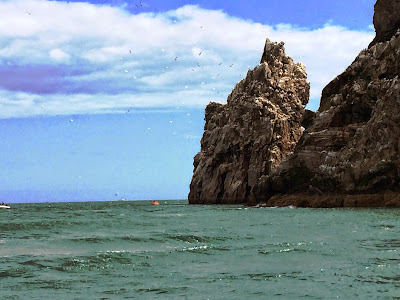 The Stack at the north-east corner of the island is home to a large variety of seabirds (Photograph: Patrick Comerford, 2014)

We then turned north to walk across the island, below the summit to the Black Hole, a tiny, grey shingle cove, and spectacular, dramatic views of the huge, free-standing rock known as “The Stack,” at the north-east corner of the island.

The Stack is home to a large variety of seabirds, including thousands of guillemots, razorbills, fulmars and gulls. Ireland’s fifth gannet colony was established on the Stack in the 1980s, and now a few hundred pairs are breeding there each year.

The island also has a large cormorant colony and a few breeding pairs of puffins, while Grey Seals are abundant in the sea around Ireland’s Eye.

The church is linked to the ‘Garland of Howth’ ... an early manuscript of the Four Gospels (Photograph: Patrick Comerford, 2014)

Below us, in a hollow to the west, we could see the ruins of an eighth-century church, known as the Church of the Three Sons of Nessan. Local lore says that around the year 700 AD three monks, the sons of Nessan, a prince of the Royal House of Leinster, built the first church on Ireland’s Eye.

The monastery is said to be the place where a manuscript copy of the Four Gospels, the Garland of Howth, was compiled in the late ninth to early tenth centuries. Also known as the Codex Usserianus Secundus, this is a fragment of a mediaeval Irish Vetus Latina gospel book, or a Latin version preating the Vulgate.

The Garland of Howth was later kept in the parish church in Howth. It is written with dimuendo script from initials, a feature of the oldest manuscripts in insular script, such as Cathach of Saint Columba. It has been described as the work of many scribes, none of them first-class.

The “garland” of its title is derived from a corrupted English form of the Irish Ceithre Leabhair “four books,” referring to the Four Gospels. Only 86 folios have survived; for example only John 5: 12 to 10: 3 has survived from the Gospel according to Saint John. It is now in Trinity College Dublin (Ms. 56). 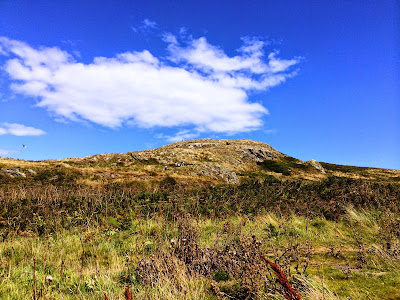 Ireland’s Eye was named bhy the Vikings who attacked the island in the 9th and 10th centuries (Photograph: Patrick Comerford, 2014)

The Vikings attacked the island late in the 9th century and they returned in the 10th century to pillage and plunder it. It was they who gave the island its name – the word Ey is the Norse for island, and so it eventually became Ireland’s Eye.

Cill Mac Nessan eventually ceased to function as a church in the 13th century, when the monastic community and life was moved to Saint Mary’s Abbey in Howth.

Ireland’s Eye remained uninhabited until the Napoleonic wars at the beginning of the 19th century, when the Martello Tower was built. 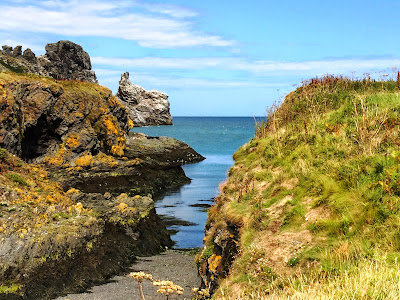 The Black Hole ... at the centre of a Victorian scandal and murder trial (Photograph: Patrick Comerford, 2014)

A few decades later, the island was the centre of a scandal in September 1852, when Sarah Maria Louisa Kirwan was killed on the island. She and her husband, William Burke Kirwan, an artist who lived at 11 Upper Merrion Street, Dublin, were on holidays in Howth, and regularly visited Ireland’s Eye, where he sketched while his wife bathed.

At his trial, William Burke Kirwan was defended by a spirited Isaac Butt, a Home Rule MP and one of the most eminent barristers of the day. He was convicted of her murder, although later researchers claim there was no murder and that Sarah Kirwan drowned accidentally after an epileptic seizure.

William Burke Kirwan was sentenced to death, but this was commuted by the Lord Lieutenant, the Earl of Eglinton, to life in prison. He was the last prisoner on Spike Island, and was released on 3 March 1879, on condition that heshould leave Ireland. It is said that after his release Kirwan took the boat to Liverpool and then moved to the US, where he married Theresa Kenny, the woman said to have been his mistress throughout his marriage and the mother of his nine children.

A local legend in Howth says that years later he returned to Ireland and visited Ireland’s Eye, where he stood “wrapped in contemplation at the Long Hole, surveying the scene of his adventure.” A sunset watercolour of Ireland’s Eye and a sketch of Maria by Kirwan are among a collection of his prints and drawings in the National Library of Ireland. At his trial, Kirwan claimed that a sketch he had made of the sunset on the day of his wife’s death proved he could not have killed her. 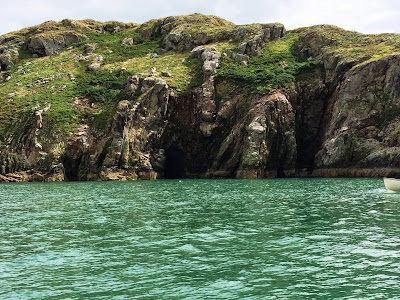 Leaving behind the cliffs and caves of Ireland’s Eye (Photograph: Patrick Comerford, 2014)

We returned to Howth on the Pinalia, a companion of the Christmas Eve. The Pinalia once operated as an angling boat out of Killybegs in Co Donegal, while the Christmas Eve hs operated out of Valentia Island in Co Kerry running trips to the Skelligs.

The trip to Ireland’s Eye takes 15 minutes and costs €15 for an adult, €10 for a child. You can spend as long as you wish on ths island, and at this time of the year the last boat returns at 5 p.m.

Back in Howth, we shared two panini and had two double espressos in Il Panorama café, at Island View on Harbour Road, a tiny, friendly Italian-Australian café and wine bar with views across the harbour and out to Ireland’s Eye.

The cruise on Dublin Bay must wait for another day.

Posted by Patrick Comerford at 22:39