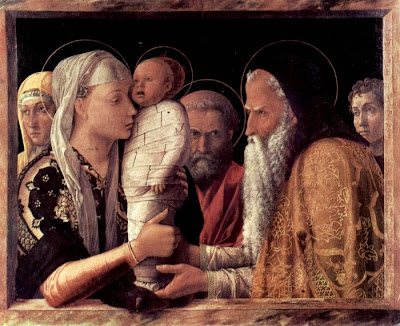 The Presentation of Christ in the Temple, Andrea Mantegna, 1460, Staatliche Museen, Berlin

This evening, at this celebration of the Feast of the Presentation, or Candlemas, instead of a sermon, let me read TS Eliot’s poem, A Song for Simeon, based on the canticle Nunc Dimittis, and one of two poems written at the time of his conversion in 1927.

This year marks the fiftieth anniversary of the death of TS Eliot, on 4 January 1965. Eliot titles his poem A Song for Simeon rather than A Song of Simeon, the English sub-title of the canticle in The Book of Common Prayer, and it is one of four poems Eliot published between 1927 and 1930 known as the Ariel Poems.

Both Journey of The Magi and A Song for Simeon draw on the journeys of Biblical characters concerned with the arrival of the Christ-child. Both poems deal with the past, with a significant epiphany event, with the future – as seen from the time of that event, and with a time beyond time – death.

Canon Patrick Comerford is Lecturer in Anglicanism, Liturgy and Church History, the Church of Ireland Theological Institute. This address was delivered at the Candlemas Eucharist on 2 February 2015. A podcast of this address is available here.