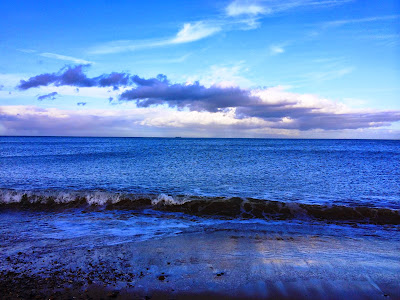 Walking on the beach in Bray this evening … thanks to the extra hour of sunlight (Photograph: Patrick Comerford, 2015)

I had two good brisk walks today, and both were welcome exercises after getting wet in the rain on my walk from Churchtown to Rathfarnham yesterday.

The clocks went forward by an hour early this morning [29 March 2015], and so there was an extra hour of daylight this evening. This peculiar adjustment to the calendar at this time of the year, allowed two of us to go for a glass of wine and coffee late this afternoon in Carpe Diem in Bray before going for a walk along the beach.

The north end of the beach below the Promenade in Bray is a little more sandy than the south end, and despite the cold and wet weather we have had for the last few days, the sky was beautifully blue this evening, and the sound of the waves of the shoreline was soft and comforting. 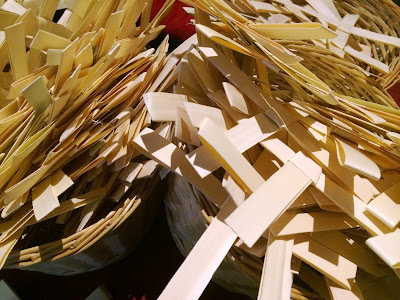 Palm Crosses ready for the Liturgy of the Palms in Christ Church Cathedral this morning (Photograph: Patrick Comerford, 2015)

Today is Palm Sunday, and I was in Christ Church Cathedral earlier in the morning for the Liturgy of the Palms and the Cathedral Eucharist.

The rain overnight had left large dollops of rainwater and pools in the grounds of the cathedral, and so instead of gathering in the Cloister Garth for the Liturgy of the Palms, we gathered in the Cathedral Crypt, and then processed up into the cathedral.

As I have been reflecting on hymns and arrangements associated with Ralph Vaughan Williams for my reflections each morning this Lenten season, it was a delight to hear the choir singing two of these settings, ‘Deck thyself, my soul, with gladness’ as the Communion Hymn, and ‘It is a thing most wonderful’ (Herrongate) as the Post-Communion Hymn.

Later, I walked as far as Harold’s Cross before catching the 49 bus home. 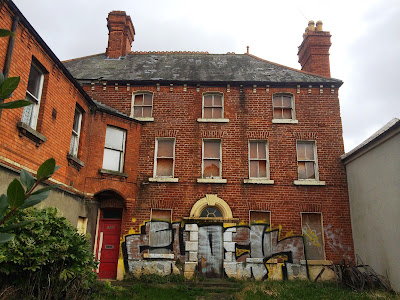 It is 20 months since I wrote about the sad neglect and decay of No 201 Harold’s Cross Road, pointing out that this part of local history is in danger of being lost. This is the house where the Quaker abolitionist Richard Allen (1803–1886) was born. It is a large red-brick building dating from 1750, and it appears on Rocque’s maps of 1756 and 1760.

Looking at the house from the street, the surviving 18th century features include the blocked front doorcase.

By 1870, this was a ‘Female Orphanage’ with a small central path leading to the front door and an extended the north range (now No 199) with a Post Office. In 1936, the main building was still marked on maps as an orphanage. By then the north range was rebuilt, but the shop I remember as Healy’s grocery shop is now closed and derelict.

But the windows are boarded up and it looks derelict; the house is now covered in graffiti; the front garden is overgrown; and there is sense that the whole site is being neglected.

I asked back in 2013 whether we are about to lose another piece of Dublin’s architectural heritage. Nothing has been done since, and the condition of the house has continued to deteriorate.

Harold’s Cross is a suburb that has a lot going for it. It has good cafés, an interesting social mix of housing, from artisan cottages at Harold’s Cross Bridge to the elegant Victorian houses and villas on Leinster Road and Kenilworth Square.

The residents may bemoan the loss of the Kenilworth Cinema in recent decades, and the fact there is no major supermarket in the immediate area. But the loss of this house would do far greater damage to the heritage and character of Harold’s Cross.

Posted by Patrick Comerford at 21:28

Patrick I love your posts , but are you & I the only people who care about no 201 , I want to cry when I stop & look at it, The City Council should be ashamed . I think business people in H X should stop paying rates until somthing is done

I rented a flat in 201 for about 10 years. Fixing this building is going to require a major financial commitment

In March I sent an email to local Cllr Mary Freehill. She in turn copied me in an email to Fiacra Worrall in Dublin City Council. Fiacra never bothered to respond.

Fiacra's email is fiacra.worrall@dublincity.ie - if anyone else wants to highlight the worsening state of the building.