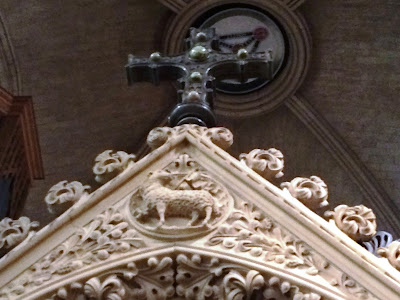 Agnus Dei ... the choir screen in Christ Church Cathedral ... at the time it was a controversial element in the restoration work of George Edmund Street (Photograph: Patrick Comerford, 2015)

For these closing days of Lent, the six days of Holy Week, I am listening to Dona nobis pacem, a cantata for soprano and baritone soli, chorus and orchestra.

I am posting a full recording of the cantata each day, so each movement can be listened to in context, but each morning I am listening to the movements in sequence, listening to one movement after another over these six days of Holy Week.

Although Vaughan Williams is often best-remembered for collecting folk songs that he adapted as hymn tunes, he also wrote many works for chorus and orchestra, selecting and setting great texts for some of his finest works.

The oratorio Dona nobis pacem dates from the early 1930s and was written as a warning against war as another World War seemed to be looming on the horizons. The texts come from the Mass, the poet Walt Whitman, the Bible, and the politician and anti-war campaigner John Bright.

The work takes its name from the concluding phrase in the invocation to the Lamb of God sung or recited during the fraction at the Eucharist:

The opening and closing movements take their names from the opening and closing words of this liturgical prayer, so Vaughan Williams, in this inter-war plea for peace, opens and closes this oratorio with the Paschal invocation of Christ, pleading for the peace that he offers to a broken world.

One hundred years ago, the first German Zeppelin air raids hit England in January 1915. Vaughan Williams, who was then 42, enlisted in the Royal Army Medical Corps and was assigned to ambulance duties, working with the wounded on the front lines in Flanders.

After World War I, Vaughan Williams held to his belief that music was a means to preserve civilisation, even amid war. He formed a military chorus and went on to dedicate his life to teaching others to make music. He promoted a “United States of the World” where “those will serve that universal state best who bring into the common fund something that they and they only can bring.”

His oratorio Sancta Civitas, ‘The Holy City’ (1923-1925) was filled with vision, sadness, and suffering, and the music was ahead of its time in its use of dissonance. His cantata Dona Nobis Pacem has its roots in that earlier oratorio, expressing his anguish over the worsening political situation in Europe that would lead again to war.

When Vaughan Williams was invited to provide a work for the centenary of the Huddersfield Choral Society in October 1936, he remembered an unpublished setting he had composed for Walt Whitman’s ‘Dirge for Two Veterans,’ a poem in Whitman’s collection Drum Taps (1865), written at the end of the American Civil War.

He now resurrected this composition as the centrepiece of his new work, preceding it with two further poems by Whitman in Drum Taps, ‘Beat! beat! drums!’ and ‘Reconciliation.’

He prefaces this group of Whitman poems with a setting of the liturgical text, Agnus Dei, and followed it with a passage from a speech given in Parliament by John Bright in 1855 during the Crimean War: “The Angel of Death has been abroad throughout the land; you may almost hear the beating of his wings …” Indeed, Vaughan Williams claimed to be the only composer ever to have set a passage from the proceedings of the House of Commons.

In the last two sections, he uses a series of passages drawn from the Old Testament which together express optimism for future peace.

The text is rounded off with a verse from Saint Luke’s Gospel, ‘Glory to God in the highest, and on earth peace, good-will toward men’ (Luke 2: 14) and a final repetition of the plea Dona nobis pacem, ‘Grant us peace.’

The whole work is welded together by his sense of urgency. As Vaughan Williams’s biographer, Simon Heffer, said his main inspiration for Dona Nobis Pacem “is drawn not from the soil of England, but from the whole world going mad around him.”

Dona nobis pacem was first performed in Huddersfield on 2 October 1936, with the Huddersfield Choral Society and the Hallé Orchestra conducted by Albert Coates, and was performed at countless festivals and concerts in the anxious years leading up to World War II.

Dona Nobis Pacem also anticipates by 25 years Benjamin Britten’s War Requiem, with its dramatic settings of Latin liturgical texts and poetry and its emphasis on reconciliation.

Given its connections with both World Wars, this cantata has been taken up again recently by choral societies throughout Britain for the commemorations of World War I.

The work is scored for chorus and large orchestra, with soprano and baritone soloists. Vaughan Williams’s perspective is no longer bound to the geography of England. His empathy now enfolds a world faced with another war. In setting biblical and poetic texts to music, he pays a subtle tribute to Verdi’s Requiem, which he admired – for example, the drop of a semitone on the word dona, bass drum key-shifts by thirds, and wild brass fanfares.

Dona Nobis Pacem opens with a heart-rending cry. This angelic cry from the soprano, Dona nobis pacem, is repeated at intervals, in different settings, punctuating the entire piece. From the beginning, the angel is the first to appear, soaring high and distant, beseeching peace against a choir alternatively gloomy with war, then echoing in serenity.

But the oratorio’s hope does not come cheap, and the humanitarian warmth and splendour of his vision remains. With Benjamin Britten’s War Requiem, Dona nobis pacem remains one of the most satisfying musical answers to the questions posed by war itself. It fills a large canvas and its theme is anguished and impassioned on a cosmic scale as it pleads for peace, tolerance and understanding.

The cantata opens with a soprano solo, one voice offering an apprehensive Agnus Dei, a well-known phrase in Liturgical texts. She introduces the theme, singing it over the orchestra and choir.

The chorus joins in her fervent cry for peace. In answer, the drums of war are heard in the far distance, no longer a contagious dance rhythm of centuries past but, instead, the harbinger of war.

Lamb of God, who takest away the sins of the world, grant us peace.

Almighty God,
whose most dear Son went not up to joy,
but first he suffered pain,
and entered not into glory before he was crucified:
Mercifully grant that we, walking in the way of his cross,
may find it none other than the way of life and peace;
through Jesus Christ our Lord.