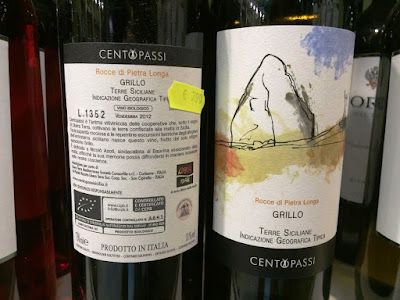 A bottle of Grillo, from a vineyard confiscated from the Mafia (Photograph: Patrick Comerford, 2015)

My week in Sicily is coming to an end. It has been a full week, swimming in the blue waters of the Ionian Sea, visiting the classical Greek theatres in Taormina and Syracuse, visiting the architecturally rich towns of Noto and Taormina, finding my way through the archaeological remains of Naxos, reaching the castellated peak of Castelmola, and getting two-thirds of the way up Mount Etna.

There have been cathedrals, churches and chapels to visit, the occasional castle and palazzo, mountains to climb, volcanic rocks to stumble across, white beaches and blue rivers to stroll along, cable cars to rise and descend in, and a blue moon to savour as it scattered golden rays on the waters of the Ionian Sea. 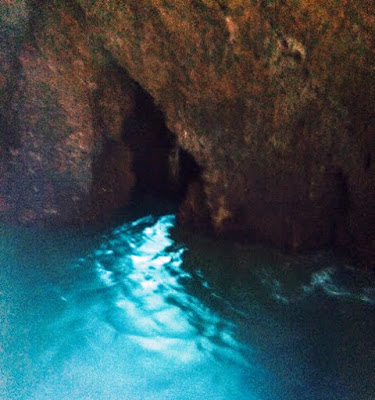 In the Grotta Azzura or Blue Cave, below Taormino, in the Nay of Naxos (Photograph: Patrick Comerford, 2015)

Much of yesterday was spent by the beach in Recanati, outside Giardini Naxos, and in the afternoon two of us were taken by boat along the long the stretch of coast from Recanati, passing around the Cape of Schiso to the shores of Giardini Naxos and the Bay of Naxos, around Capo Taormina below Taormina on the hill above, stopping briefly to wonder at tiny and conserved Isola Bella, entering the Grotta Azzura (Blue Cave) – less crowded and more relaxing than its counterpart on Capri – and on to the Baia di Mazzaro and the Baia di Mazzeo.

One of the joys of a new holiday destination is noticing the changes in trees and flowers, in fruits and birdsongs, in the sounds of music and buskers, in traditions about eating out, daily coffee and the evening promenade, and getting to know the local wines. 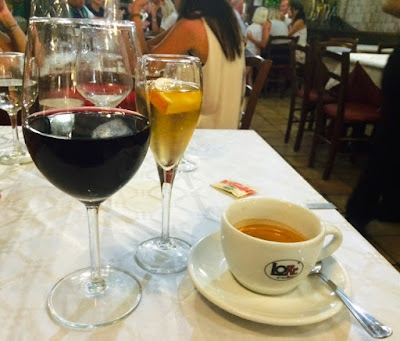 One of the joys of a new holiday destination is exploring the local wines and coffees (Photograph: Patrick Comerford, 2015)

I expected to hear a little more about the Mafia, as any visitor to Sicily must do, but perhaps ought to have been surprised that the only visible presence is in either a popular T-shirt slogan proclaiming “I am the godfather,” or the half-day “Godfather Tour” offered by all the local travel agents.

Inevitably, the tour brings visitors through the streets and churches of Savoca and the catacombs of the Cappucini Convent.

But looking for a bottle of wine to sip on the balcony of my room in the Hotel Villa Linda last night, I was delighted with a bottle of Grillo from Centopassi collection of Libera Terra labelled Rocce di Petra Longa.

Grillo is a Sicilian white grape variety once associated primarily with Sicily’s fortified Marsala wines, which have long fallen from fashion.

Grill is still widely planted on Sicily, but is now used mainly in a variety of still white wines. At a high standard, it makes a fresh, light white wine with nutty, fruit-driven flavours that include lemon and apple.

There is some debate about the origins of Grillo. Some say it is native to Sicily, derived from Catarratto and Muscat of Alexandria. Others say it was brought here from Puglia in southern Italy. Another story says it is the same wine as Mamertino, a favourite of Julius Caesar.

Last night’s bottle, bought in a small local supermarket, was vino biologico or an organic wine, made from grapes cultivated on land confiscated from the Mafia.

Unicredit bank helped fund planting new vineyards on 150 ha near Palermo that had been confiscated from a former Mafia boss, Michele Greco, who died in prison in 2008. It was all part of a €1.2 billion EU project to recover ex-Mafia land, including vineyards in Sicily, Calabria, Puglia and Campania, and integrate them back into the legal economy.

Greco, who was known as “The Pope,” had been a leading figure in the Cosa Nostra, and was jailed for life for a number of murders, including the 1982 assassination of Carlo Alberto Dalla Chiesa, and his wife.

The project includes 125 hectares of vineyards near Palermo and 800 hectares of olive and citrus trees. Most of the land had gone untended and uncultivated when Mafia owners were jailed. Many of the vines had died from neglect and needed replanting.

When the projects began, there were inevitable acts of intimidation, including arson fires. The co-operatives were not discouraged and did not lose hope.

Libera Terra’s wine business, including Centopassi, was soon producing half a million bottles a year. Each of the Centopassi wines is dedicated to someone assassinated by the Mafia. The white wine I enjoyed last night – Grillo – was dedicated in honour of Nicolo Azoti, a trade union leader murdered in 1946.

And enjoying that on my balcony last night was a better tribute than going on the the tour or buying the T-shirt. 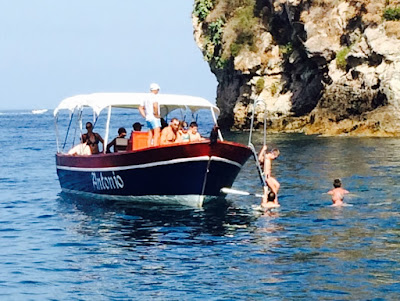 A final boat trip along the coast of Naxos and Taormino (Photograph: Patrick Comerford, 2015)