Lingering promises of summer
on the seafront in Bray 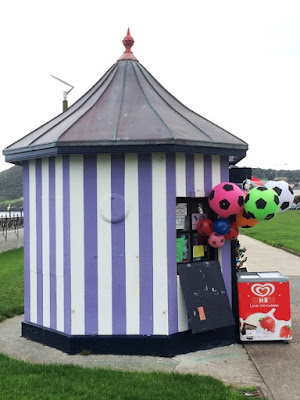 Candy stripe kiosks and summer colours on the seafront in Bray this afternoon (Photograph: Patrick Comerford, 2015)

These last few days have been beautiful, bright, sunny autumn days, offering some compensation for the poor summer we had in Ireland this year. There have been bright, glowing sun rises, and despite a rain shower every now and then, there have been welcome lengthy spells of sunshine pouring directly into my study throughout these days.

I once referred to these experiences of bright, sunny autumn days as “Indian summers” but was upbraided by an American Facebook friend who thought the term was racist and a derogatory reference to Native Americans, in a similar vein to “Indian givers.”

An Indian summer is defined as a period of unseasonably warm, dry weather that sometimes returns in autumn in the Northern Hemisphere, with sunny, clear days and above normal temperatures, usually between late September and mid-November.

In this part of the English-speaking world, the term “Indian Summer” is often said to derive from the days of the Raj in India when British colonial administrators moved up to the foothills of the Himalayas to the tea plantations and the area around Simla to their own “little England” to enjoy days that were more like summer back home.

With the bright sunshine and blue skies, it seemed summer was trying to linger a little longer in Bray late this afternoon.

I have been working continuously for 13 days since I came back from Crete, and I left work early to attend the mid-day Eucharist in Christ Church Cathedral and to meet a friend from England who is on a short visit to Ireland before starting a mission placement in south-east Asia.

Later, four of us went for a falafel lunch in Umi in Dame Street, and I brought my friend to the Library in Trinity College Dublin to see the Book of Kells 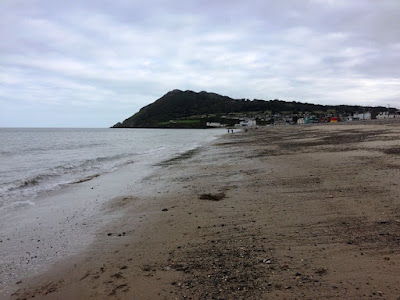 A walk on the beach in Bray late this afternoon (Photograph: Patrick Comerford, 2015)

I then caught the DART along the coast, through Blackrock, Dun Laoghaire, Dalkey and Killiney, out to Bray, where the seafront was quiet but the summer atmosphere was lingering, with the candy-stripe kiosks still open, decorated with colourful beach balls in string nets and still advertising ice creams.

Two of us met up for coffee and a snack in Carpe Diem, including a glass of Italian wine and magnificent double espressos.

Later, there was time for another walk on the beach. But misty clouds were moving in from the Irish Sea, shrouding the headlands, and it was beginning to look less like an “Indian Summer” and more like the autumn John Keats described as the “Season of mists and mellow fruitfulness.”

Happily Met Eireann this evening is forecasting a long spell of warm and settled weather that is going to continue well into next week or even longer. A high pressure system is going to keep conditions mostly dry and settled across northern Europe for most of next week … although this is going to mean rainy, stormy, thundery weather in Greece and many other parts of the Mediterranean.

Temperatures in Ireland are expected to be a consistent 17-18 degrees, with light south-westerly or variable breezes. Monday and Tuesday will both be dry and bright with sunny spells, afternoon temperatures in the mid to high teens and light southerly breezes.

It looks like summer is coming late to Ireland and England … but then, as they say, it’s better late than never. 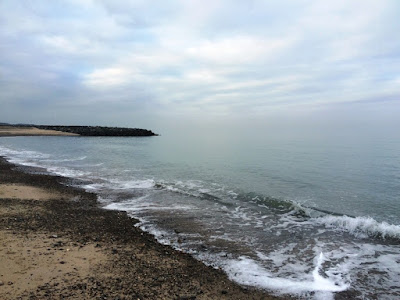 Posted by Patrick Comerford at 20:32