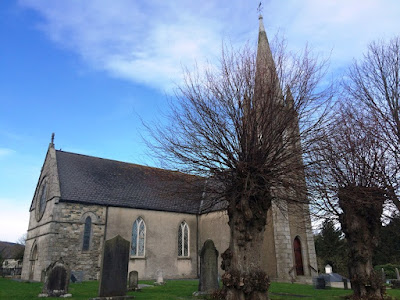 Saint Mary’s was built in 1775-1776, and has been renovated, restored and rebuilt over the generations (Photograph: Patrick Comerford, 2015)

I spent much of Saturday morning [21 November 2015] photographing some of the rich architectural heritage of Bunclody in north Co Wexford, and hope to write about it later.

As I walked around the town, I dropped in to see Saint Mary’s, the Church of Ireland parish church, and received a warm welcome from the Rector of Bunclody, the Revd Michael Stevenson, and his wife Alison.

There are four churches in the Bunclody union in the Diocese of Ferns: Saint Mary’s, Bunclody (Newtownbarry), Saint Fiaac’s, Clonegal (Moyacombe), Saint Paul’s, Kildavin (Barragh), and Saint Brigid’s, Kilrush (Ballinabearna), and the parishes spread from Bunclody into parts of Co Wexford, Co Carlow and Co Wicklow.

Saint Mary’s is the largest of the four churches in the union of parishes, and can seat up to 400 people. It stands elegantly on a hill overlooking Bunclody, beside the Mill Race Hotel, where I was spending a few days. The large, well-kept churchyard has many old graves, some dating back to the 18th century.

The bell in Saint Mary’s is a memorial to Bishop Henry Maxwell (Photograph: Patrick Comerford, 2015)

Saint Mary’s is built of cut granite stone, and the church has a fine granite steeple with four spires at its base, which was added in 1871. The single bell in the steeple commemorates Henry Maxwell, Bishop of Meath, who is closely identified with building this church and who died in 1798.

Bunclody was once a small hamlet and part of the parish of Templeshanbo. It was named Newtownbarry in the 18th century in honour of the heiress, Judith Barry, who died in 1771, and the town was planned and laid out by the Maxwell-Barry family. In 1719, Judith Barry had married John Maxwell, MP for Co Cavan and later the 1st Lord Farnham, and she is buried in Christ Church Cathedral, Dublin.

Judith Barry and John Maxwell were the parents of Bishop Henry Maxwell, who inherited Newtownbarry and who is commemorated in a plaque in Saint Mary’s. Bishop Maxwell’s wife, Margaret Foster, was a sister of John Foster, the last Speaker of the Irish House of Commons. He gave an acre of land for a new churchyard in 1770. 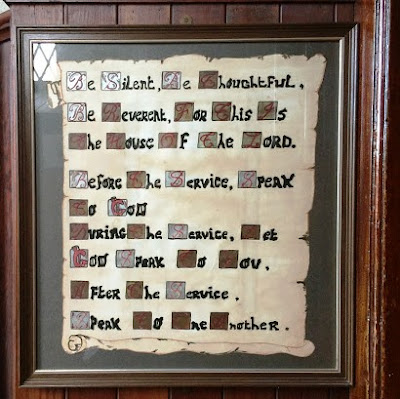 A sign in the porch in Saint Mary’s Church (Photograph: Patrick Comerford, 2015)

Saint Mary’s Church was built in about 1775 at the expense of the Maxwell family and it was consecrated on 3 May 1776.

John Barry gave a farm of land at Ryland as a glebe in 1802 and the glebe-house or rectory was built in 1805 for £1,104. John Maxwell-Barry assumed his grandmother’s family name when he inherited the Newtownbarry estates. He built a new house, Woodfield, and in 1823, he succeeded as the 5th Lord Farnham.

Henry Maxwell, 7th Baron Farnham, and his wife Anna (Stapleton), Lady Farnham, died in the horrific Abergele train disaster in North Wales in 1868. They were the last members of the family maintain connections with Newtownbarry. 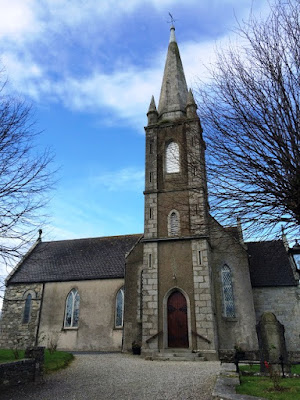 Saint Mary’s has been reshaped and rebuilt many times since it was first built (Photograph: Patrick Comerford, 2015)

When the church in Barragh (Kildavin) was burned down in 1802 the parishioners of Barragh paid to build a gallery in Saint Mary’s Church, for their own use, because they needed the extra seating space.

The church was extended in 1807, with a two-bay double-height transept to the south. In the 1830s, the Ecclesiastical Commissioners gave £548 for repairs to Saint Mary’s. 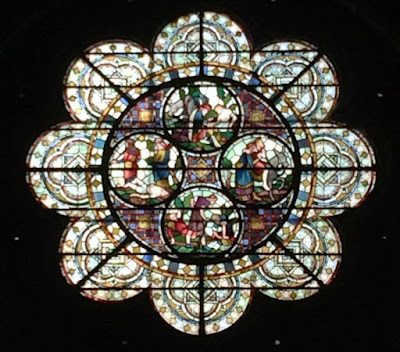 The ‘Good Samaritan’ window is an integral part of the Hall-Dare memorial in Saint Mary’s (Photograph: Patrick Comerford, 2015)

Joseph Welland (1798-1860) carried out an extensive reorientation programme was carried out by. A later programme of work was undertaken after 1876 by William Burges (1827-1881), who was commissioned by the Hall-Dare family of Newtownbarry House to design memorial to Robert Westley Hall-Dare. He died in Rome on 18 March 1876 at the age of 35, and is buried in the Protestant Cemetery there.

The motifs in the memorial include a Romanesque-style door-case, a tiled or diapered effect to the gable, and other details that contribute to the eclectic quality of this church.

The octafoil rose window is part of this memorial and tells the story of the Good Samaritan. It is set in a decorative cut-granite frame with a carved surround, and fixed-pane fittings with leaded stained glass panels. 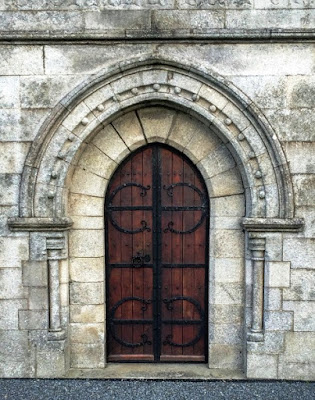 The pointed-arch door is an part of the Hall-Dare memorial in Saint Mary’s Church (Photograph: Patrick Comerford, 2015)

Originally the church had a wooden spire. It caused many problems with rain penetration, and needed extensive repairs. The spire was repaired in 1897 and again in 1968, and the church was reroofed in 1983-1984.

This church is part of the architectural heritage of Bunclody, and over the next few days I hope to tell the stories of some of the domestic architecture that also tells the story of the town. 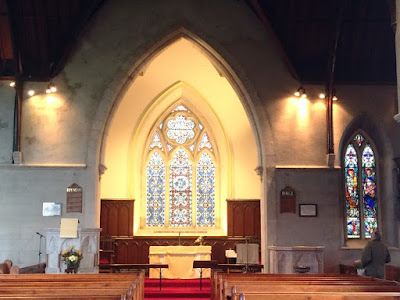