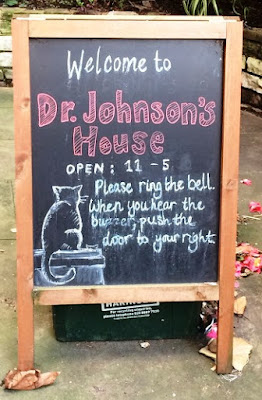 Curiosity and the Cat? … Hodge the Cat on the signboard outside Dr Johnson’s House in Gough Square, London (Photograph: Patrick Comerford, 2016)

Johnson encouraged study and curiosity. Among the many quotations from him I saw on the stairs in the Samuel Johnson Birthplace and Museum in Lichfield last week is the advice Johnson gave Boswell when he was worried that he had been filling his own journal pages with “too many little incidents”:

There is nothing too little for little a creature as man. It is by studying little things that we create the great art of having as little misery and as much happiness as possible.

The gratification of curiosity rather frees us from uneasiness than confers pleasure; we are more pained by ignorance than delighted by instruction. Curiosity is the thirst of the soul; it inflames and torments us, and makes us taste everything with joy, however otherwise insipid, by which it may be quenched.

Later that year, he wrote in the Rambler on 7 December 1751:

I am far from any intention to limit curiosity, or confine the labours of learning to arts of immediate and necessary use. It is only from the various essays of experimental industry, and the vague excursions of mind set upon discovery, that any advancement of knowledge can be expected; and though many must be disappointed in their labours, yet they are not to be charged with having spent their time in vain; their example contributed to inspire emulation, and their miscarriage taught others the way to success.

But the distant hope of being one day useful or eminent ought not to mislead us too far from that study which is equally requisite to the great and mean, to the celebrated and obscure; the art of moderating the desires, of repressing the appetites; and of conciliating or retaining the favour of mankind. 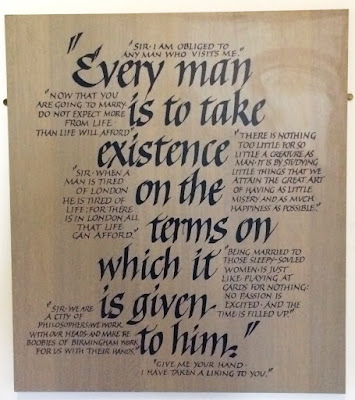 In praise of little things … a panel of quotations on the stairs in the the Samuel Johnson Birthplace and Museum in Lichfield (Photograph: Patrick Comerford, 2016)