‘Lichfield ... I have just arrived’ 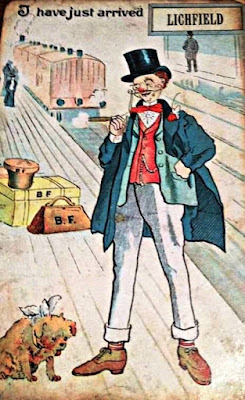 ‘Lichfield ... I have just arrived.’ An old postcard (Courtesy Dave Gallagher/You’re probably from Lichfield, Staffs, if ...)

There is a wonderful network on Facebook called ‘You’re probably from Lichfield, Staffs, if ...’

The group members and activists, particularly Dave Gallagher and others such as Trevor Morrison, John Clarke, John Godley and Jayne Preston, regularly post old photographs, postcards, cuttings from the Lichfield Mercury and programmes, and other memorabilia from Lichfield, as well as beautiful photographs of Lichfield today.

The next meeting of the group is at 7 p.m. this evening [1 March 2016], at Lichfield Social Club on Purcell Avenue, with photographs and memorabilia of Lichfield, and informal meeting to meet old and new friends, tea and coffee, and a quiz about Lichfield.

Dave recently posted this old postcard of Lichfield, and it seems appropriate to repost it as I arrived back in Lichfield earlier today for a days with family, cousins and friends.

Previous arrangements mean I cannot get to this evening’s meeting, but it’s worth trying to get there if you live in Lichfield.

I am staying in the Hedgehog Vintage Inn on Stafford Road, and looking forward to lengthy meals in some of my favourite restaurants, some walks in the countryside along Cross in Hand Lane behind the Hedgehog, or walks along Beacon Street into the centre of Lichfield.

I hope to attend some of the services in Lichfield Cathedral tomorrow to mark Saint Chad’s Day [2 March 2016], and might enjoy showing off some of my favourite places in Lichfield, including Lichfield Cathedral, Vicar’s Close, the Cathedral Close, the chapel in Saint John’s Hospital, the site of the old Franciscan Friary, the museum in Saint Mary’s, Darwin House, the Guildhall, Stowe Pool and Minster Pool, the Samuel John Birthplace and Museum – considering I am blogging my reflections on Samuel Johnson each morning during Lent this year.

There may even be a chance to visit the little-known Roman site at Wall in the countryside south of Lichfield. 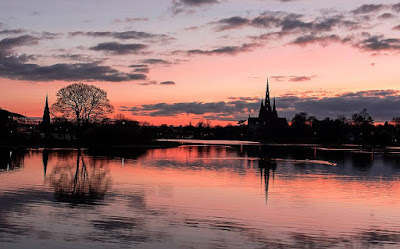 Posted by Patrick Comerford at 13:30