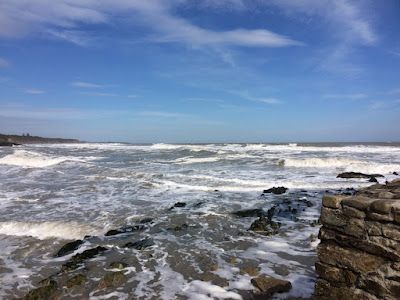 I was invited to Hollyfort in north Co Wexford, for the unveiling of remembering the role of Máire Comerford and Aileen K’Eogh in the Easter Rising 100 years ago in 1916.

The stone carvings stand in a new commemorative garden by the small bridge over the River Bann and this afternoon’s commemorations included readings, poetry, flag raising, a reading of the Easter Proclamation and sharing stories by members of the Comerford and Keogh family.

The special guests included the film-maker Joe Comerford, a nephew of Máire Comerford, and David and Simon Keogh, grandsons of Aileen Keogh’s brother.

This afternoon’s gathering was reminded that Máire Comerford and Aileen Keogh were two unlikely revolutionaries. 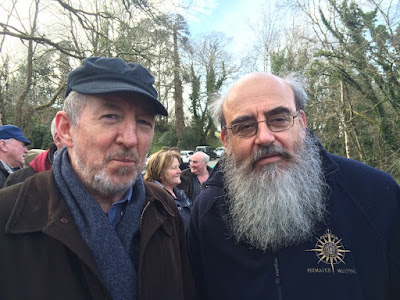 She was born Mary Eva Comerford in Ardavon House, Rathdrum, Co Wicklow, on 29 June 1893 – although she preferred to call herself Máire after the Irish Civil War. She the eldest child of James Charles Comerford (1842-1907), of Ardavon House, Rathdrum – the owner of Rathdrum Mill and a friend of Charles Stewart Parnell. She later recalled: “My father was a friend of Parnell and they visited each other quite often.”

Her mother, Eva Mary Comerford (1860-1949) was three times tennis champion of Ireland. Eva Mary Comerford’s father, Colonel Thomas Esmonde VC (1829-1872), Deputy-Inspector General of the Royal Irish Constabulary, served in the Crimean War and was the first British officer to enter Sebastopol after the siege in 1854.

He was later decorated with the Victoria Cross for his part in the Battle of Sebastopol. Colonel Esmonde – whose great uncle was the Right Rev James Murphy, Bishop of Cork – was a younger brother of Sir John Esmonde (1826-1876), 10th Baronet, of Ballynastragh, Gorey, Co Wexford, and Glenwood, Rathdrum, Co Wicklow, Liberal MP for Waterford (1852-1876). Máire later laughingly spoke of the Esmondes as a “minor tier of the Anglo-Irish Catholic aristocracy.”

Máire was an observer at the First Dail in 1919. She was present in the Round Room at the Mansion House to hear the Declaration of Independence being read and passed by the 37 TDs present.

She remained a committed supporter of Republican causes until her death in her ninetieth year, and at her death she was described as “the grand old dame of Republicanism.”

Máire joined the staff of Eamon de Valera’s newspaper, The Irish Press, in 1935, and worked as a reporter as well as editing the women’s page six days a week for about 30 years.

She retired in 1964. Later, colleagues in The Irish Press described her as “a granny-woman figure in the newsroom” on Burgh Quay. One of her last letters published in The Irish Times stated: “The Churches have played a part in the despoliation of Ireland. I appeal to them to make amends to the Irish people, and to provide an example of Christian living, by giving up their wealth, and by joining together in unity.”

Máire Comerford died at her home in Sandyford the age of 89 on 15 December 1982. When she died she was described as “the grand old dame of Republicanism.” She was buried at Mount Saint Benedict, near Gorey, Co Wexford, in a plot beside her life-long friend Father John Sweetman and Aileen K’Eogh and on the site of the school founded by Father Sweetman.

Although I did share her politics, I admired her strong feminism and her social values, and I value the open, pluralist and democratic society we have in Ireland today. She was convinced that the Bunclody and Rathdrum branches of the Comerford family were related, although I am not able to prove this. She encouraged my genealogical researches, and I was pleased to be introduced this afternoon as “a member of her extended family.”

Aileen K’Eogh is remembered for a dramatic jail escape during the War of Independence, and was the patron of Mount Saint Benedict, Father Sweetman’s school. 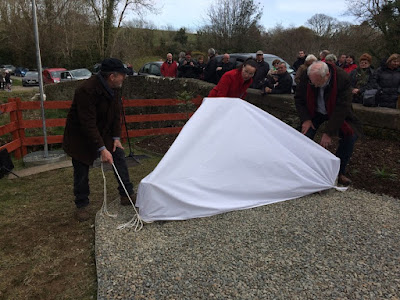 Earlier in the day, I had been invited to preach at the Parish Eucharist in Christ Church, Delgany, Co Wicklow, where the Rector is the Revd Nigel Waugh.

After lunch and warm hospitality at the Rectory with Nigel and Heather, two of us drove through the Glen of the Downs and the beautiful Wicklow scenery, for a walk on the beaches in Ballymoney, north of Courtown, Co Wexford.

There are two beaches in Ballymoney, and I was last on the beach there in August last summer. But the waves were so choppy and the tide was so high it was impossible to check out reports that much of the North Beach has been washed away by recent storms.

Standing on the cliffs between the two beaches looking out at the rocks and the waves, was such a refreshing experience this afternoon that it could be described as “nature’s power shower.”

Most houses in Ballymoney are holiday homes and on a sunny, summer bank holiday weekend, these beaches can be crowded, and long queues form up outside the local shop. Some of the housing estate are full of holiday houses and have only a few permanent residents. So it was a gentle surprise to see so many local people there this afternoon for a walk on the beaches and to enjoy the waves and the tide.

After this afternoon’s commemorations in Hollyfort, we returned through Gorey and the Glen of the Downs. 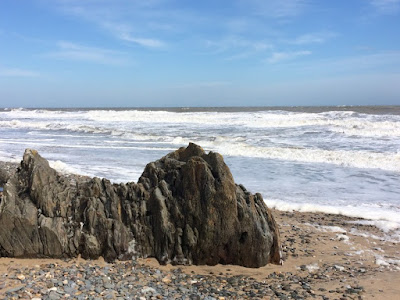 Posted by Patrick Comerford at 20:39