Presiding at the Eucharist in
the Cathedral on ‘Low Sunday’ 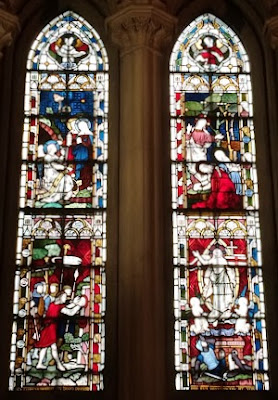 This Sunday, the Second Sunday of Easter [3 April 2016], is traditionally known as Low Sunday, although in some parts of Europe it is also known as Saint Thomas Sunday, Quasimodo Sunday and Quasimodogeniti.

The traditional English name of Low Sunday may reflect the contrast with the high celebrations of Easter last Sunday [27 March 2016], although some say the word “Low” may come from the Latin Laudes, the first word of a sequence used in the Sarum Liturgy. The name Quasimodo Sunday comes from the first words of the introit in Latin.

In Victor Hugo’s novel Notre Dame de Paris or The Hunchback of Notre Dame (1831), Quasimodo is so named because he was found abandoned on the doorsteps of Notre Dame Cathedral on the Sunday after Easter, 1467, by Archdeacon Claude Frollo.

As the bells ring out in Christ Church Cathedral, Dublin, this morning, I am presiding at the Cathedral Eucharist, and the preacher is the residential priest vicar, the Revd Garth Bunting.

The setting this morning is Timothy Powell’s Melodious Sonnet, described as a “Colonial American Mass,” sung by the Davidson Chorale from Augusta, Georgia.

There is an American flavour to some of the hymns too. The processional hymn, ‘Love’s redeeming work is done,’ by John Wesley, is sung to the tune ‘Savannah’ (‘Herrnhut’), a melody found in John Wesley’s ‘Foundry Collection’ (1742).

The Davidson Chorale is in Christ Church Cathedral again tomorrow evening [4 April 2016], giving a concert at 7.30 p.m. with the New Dublin Voices.

The Davidson Chorale under the baton of the conductor Phillip Streetman is the top performing choir at the Davidson Fine Arts Magnet School in Augusta, Georgia, a 2004 Grammy Signature School, and is one of the most acclaimed high school choirs in the world.

The Chorale has been recognised by numerous associations, including winning the 2012 American Prize in Choral Performance. They have toured extensively, performing for Easter services at the Saint Thomas Church in Leipzig in 2010 and at the Vatican in 2012.

The Chorale performs a variety of literature, with numerous concerts throughout the year.

Accompanied by members of the Davidson Chamber Orchestra with director and violinist Dr Laura Tomlin, guest conductors and composers Dr Tim Sharp and Dr Tim Powell, and the Irish composer Patrick Cassidy, the Davidson Chorale’s concert tour of Ireland will include American spirituals, music by John Williams, and the premieres of compositions by Powell and Cassidy, as well as Tim Sharp’s High Lonesome Bluegrass Mass.

Lord God our Father,
through our Saviour Jesus Christ
you have assured your children of eternal life
and in baptism have made us one with him.
Deliver us from the death of sin
and raise us to new life in your love,
in the fellowship of the Holy Spirit,
by the grace of our Lord Jesus Christ.