Remembering 1916: ‘they shall
beat their swords into ploughshares’ 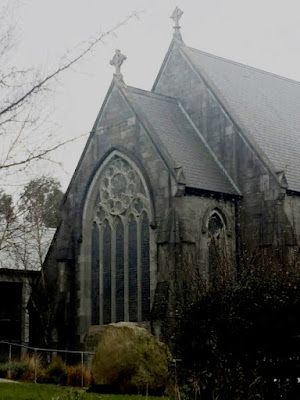 I imagine there is a mixture of feelings about the 1916 commemorations here this morning. Let me just identity four of those types of feelings that we might know are just below the surface:

1, Some of you may feel you are suffering from ‘1916 Fatigue.’ It’s been everywhere since the beginning of the year: on television, in newspapers, in the schools, on advertising hoardings … and may well wonder why you have to listen to more about it in this church this morning.

2, Some of you may feel a certain degree of national pride. Whether you agree or disagree with those we call ‘the men of 1916,’ you may feel thankful that we live in an open democracy and a free society, despite all its failures and weaknesses. Despite the many social, political and economic problems we have today, you may feel ‘we are where we are’ and want to be thankful about that.

3, Some of you, like me, may be very upset about the way the 1916 commemorations displaced our Easter celebrations last month, and wonder why the parades and marches and other events could not have been staged on the actual anniversary of the Rising, 24 April 2016, rather than Easter Day, which fell on 27 March 2016.

4, And some of you may feel alienated: that the whole thing has been staged and has been hijacked by a narrow, myopic vision of Irish identity that is Green, Gaelic and Catholic and that excludes members of the Church of Ireland.

But there is real difficulty if we leave the narrative of 1916 to those who want to see the rebels as Green, Gaelic and Catholic working class heroes. We may both distort the truth and allow ourselves not to engage with the debate about the sort of Ireland we want for ourselves today and for our children and grandchildren in the future.

To distort the past does not allow us to own the present or to have vision for the future. I remember well the commemorations of 1966, and the horror it created within me. It is no coincidence that within three years Northern Ireland was being riven with violence and the Provisional IRA had emerged.

The truth, of course, is so often different from the pedalled myth. For example, despite what they would have us believe, neither Sinn Fein nor the IRA was involved in the events of Easter Week 1916. Sinn Fein was then a monarchist party, supporting Arthur Griffith’s concept of a dual monarchy shared by Britain and Ireland and modelled on the Austro-Hungarian empire. The party was also facing bankruptcy, unable to pay the rent on its premises in Harcourt Street.

Nor is the IRA one of the three armed groups named in the 1916 Proclamation, and it did not emerge until long after the Rising.

On the other hand, many members of the Church of Ireland were involved in the events that led up to the Rising and in 1916 itself.

Douglas Hyde, the son of a Cork-born rector, was a key figure in the revival of the Irish language. Lady Gregory, WB Yeats and ‘AE’ George Russell, all involved in the Abbey Theatre, were born in the Church of Ireland.

The Revd Professor Robert Malcolm Gwynn, who is buried in Whitechurch Churchyard, offered his rooms in Trinity College Dublin, for the meeting at which the Irish Citizen Army took its name in 1913. The Howth and Kilcoole gunrunnings in 1914 were organised mainly by members of the Church of Ireland.

Projecting images of the signatories of the 1916 proclamation as Green, Gaelic and Catholic working class heroes is false and manipulative. Pearse was the son a Birmingham Unitarian, two of the seven signatories were not born in Ireland, one was the son of an Englishman, one had served in the British army, one was the son of an RIC officer, one was born in a British army barracks, one was a titled aristocrat who went to an English public school, and at least three married women who were born into the Church of Ireland.

The key figures in the Rising also included Countess Markievicz, born Constance Gore-Booth, the trade unionist Harry Nicolls, and Dr Kathleen Lynn, a parishioner in Rathmines all her life. The historian Martin Maguire of Dundalk Institute of Technology has counted at least 45 Protestants – 21 women and 24 men – who were active in the Republican movement between 1916 and 1921, and the dramatist of that period, Sean O’Casey, was a member of the Church of Ireland too.

Of course they were not uncritical in their engagement with those events. Many were shocked and feared the worst, so that Yeats could write:

Things fall apart; the centre cannot hold;
Mere anarchy is loosed upon the world,
The blood-dimmed tide is loosed, and everywhere
The ceremony of innocence is drowned;
The best lack all conviction, while the worst
Are full of passionate intensity.

Among the 1,200 graves in Saint Nahi’s Graveyard in this parish are the graves of the artists Susan Mary (‘Lily’) and Elizabeth Corbett (‘Lolly’), sisters of the poet WB Yeats and the artist Jack B Yeats.

The Yeats family lived on Lower Churchtown Road, opposite the ‘Bottle Tower.’ Lily and Lolly were involved in the Dun Emer Industries in Dundrum, and Lolly was the first woman to run a private printing press in Ireland.

Also remembered in the churchyard is Patrick Doyle from Milltown, who was killed at Clanwilliam House during Easter Week 1916. He was killed on 26 April 1916 and his body was never recovered as Clanwilliam House was engulfed in flames, almost completely destroying the building. A font at Milltown marks his role in the Rising, and he also gave his name to Patrick Doyle Road in the Windy Arbour and Milltown area.

Patrick Doyle was a foreman at the laundry in Milltown. He was a Roman Catholic but his mother was a member of the Church of Ireland. It is likely he inherited his nationalist views from his mother as her brother was a Fenian who had been transported to Australia.

He was only 36 when he died and he left a widow and five children aged from 14 down to 1. Poignantly he died on his youngest child’s first birthday. Although there was no body to bury, he is named on his wife’s grave in Saint Nahi’s.

His eldest son, also Patrick Doyle, was only 22 when he was killed in the Civil War at Crooksling, Co Dublin, on 7 July 1922. He too is buried at Saint Nahi’s.

James Burke, who is also buried in the churchyard, was one of the spectators shot dead in Croke Park on ‘Bloody Sunday,’ 21 November 1920.

Another grave from those troubled times is that of Lawrence Sweeney or Lorcan Mac Suibhne from Goatstown, who was killed in Castledermot during the Civil War on 5 July 1922.

When a memorial to Lorcan Mac Suibhne was unveiled in the churchyard three years later in 1925, it attracted one of the biggest gatherings ever in the churchyard and brought to this parish some of the key figures involved in 1916, including Eamon de Valera, who was still debating taking his seat in Dail Eireann, Sean MacEntee, and Count Plunkett, father of the poet and proclamation signatory Joseph Mary Plunkett.

It was one of the first such gatherings of key figures from the events of 1916, and it took place in this parish.

Perhaps we ought to give thanks this morning that those people beat their swords into ploughshares and their spears into pruning hooks (Isaiah 2: 4), that they decided that in this nation that we should learn war no more, that they put aside the differences of the past, and allowed the future to be shaped not by the violence of the previous decade but by a new commitment to democracy.

The democratic handover in this society lacked the trauma of change seen on Continental Europe in the 1920s and the 1930s. They may not have loved their former enemies, but they certainly had put aside hatred (Matthew 5: 43-44).

Despite the presence of the Blueshirts, no credible fascist or racist party emerged in this society, unlike what happened in Italy, Germany, Spain, Hungary, Romania and many other European countries.

The 1937 Constitution made democracy the founding principle of Irish society. We can disagree with each other, but we do not need persecute each other any longer. They created a society in which the people have the final say in a referendum.

Whether you agree or disagree with recent referendum results, we can all agree that this is the best way to make decisions in our society.

And today, of course, I am so pleased that despite our nation being forged in the cauldron of violence, our armed forces are known internationally not for their engagements in wars and battles, but for their contributions to UN international peacekeeping missions around the world, that our naval service has engaged in so many humanitarian rescue missions in the Mediterranean while others have stood aside.

Of course, I have many worries for the future. I am worried, for example, that we have still not learned how to cherish all the children of the nation equally. I am worried that access to higher education, health care and the professions is baded on class and wealth rather than ability and need.

Is it a society that reflects the values of the Kingdom of God, in which we love our enemies, pray for our persecutors, in which people have beaten their swords into ploughshares and their spears into pruning hooks?

Is it a vision for a future in which nation shall not lift up sword against nation, and they shall learn war no more? 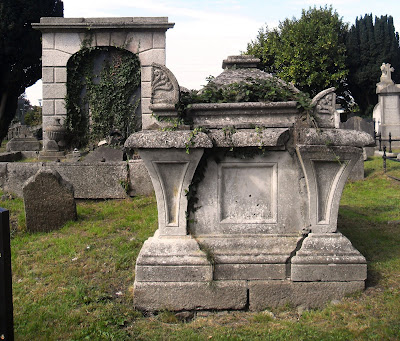 Saint Nahi’s Graveyard has over 1,200 graves, and the names of 800 of those buried there are known (Photograph: Patrick Comerford)

(Revd Canon Professor) Patrick Comerford is Lecturer in Anglicanism, Liturgy and Church History, the Church of Ireland Theological Institute. This sermon was preached in Christ Church, Taney, Dundrum, on 24 April 2016.

Posted by Patrick Comerford at 10:15