The Annunciation: ‘this doubtful day
Of feast or fast, Christ came and went away’ 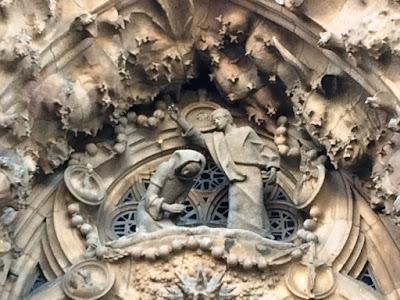 The Church of Ireland Theological Institute,

This year, Good Friday fell on 25 March, which is ordinarily the Feast of the Annunciation. This symbolically rich concurrence is relatively rare. It occurred only three times in the 20th century (1910, 1921, and 1932), and twice in this century (2005 and 2016). It will not occur again for almost a century and a half, not until 2157 – although, if the date of Easter is fixed by then, it will never happen again.

Today, the Church deals with this rare coincidence by transferring the feast of the Annunciation to the first Monday in the week after Easter Week.

But in the past, when this coincidence occurred, it was seen to be profoundly meaningful. The date of the feast of the Annunciation was chosen to match the supposed historical date of the Crucifixion, as deduced from the Gospels, to underline the idea that Christ came into the world on the same day that he left it: his life formed a perfect circle. In other words, 25 March was both the first and the last day of his earthly life, the beginning and the completion of his work on earth.

Both events were understood to have happened in the spring, when life returns to the earth, and at the vernal equinox, once the days begin to grow longer than the nights and light triumphs over the power of darkness. Tolkien fans among us this evening know that the final destruction of the Ring takes place on 25 March, to align Tolkien’s own “eucatastrophe” with this most powerful of dates.

The early historian, the Venerable Bede, says this dating is symbolic but it is not only a symbol; it reveals the deep relationship between Christ’s death and all the created world, including the sun, the moon and everything on earth.

When Good Friday fell on 25 March 1608, too, John Donne marked this paradoxical conjunction of “feast and fast,” falling “some times and seldom,” with a well-known poem in which he draws on the same parallels found in those mediaeval texts and images.

I was acutely aware of these coincidences during my visit to Barcelona for Good Friday and Easter weekend.

One of the most beautiful works of architecture in Barcelona – indeed, one of the most beautiful churches in the world – is the Basilica of La Sagrada Familia, built from 1894, but not expected to be completed until 2026. The basilica designed by Antoni Gaudí (1852-1926) has two façades. The Nativity Façade depicts scenes from Christ’s birth and early life, including the Annunciation and the Incarnation.

On the opposite side, the Passion Façade includes carvings of scenes from the trial, passion and crucifixion of Christ. In a very moving way, Gaudí brings together the Annunciation and the Crucifixion.

But perhaps more movingly this link was emphasised in the street processions through the narrow streets of Barcelona on the evening of Good Friday. One float we followed had a life-sized effigy of the Pieta. The weeping Mary was bearing on her lap the body of the Crucified Christ who had been taken down from the Cross.

In her womb she has carried the Christ Child. Now she cradles the Crucified Christ on her lap. The lap on which he had once played is now the lap on which his limp and lifeless body lies dead.

Yet, all of this, birth and death, annunciation and crucifixion, remain perplexing, find no explanation without Resurrection. As the Apostle Paul puts it: “if Christ has not been raised, then our proclamation has been in vain and your faith has been in vain” (I Corinthians 15: 14). And again: “And if Christ has not been raised, your faith is futile; you are still in your sins. Then those also who have fallen asleep in Christ are lost. If only for this life we have hope in Christ, we are of all people most to be pitied” (I Corinthians 15: 17-19).

Mary’s yes at the Annunciation is her yes, is our yes, is the yes of humanity and of creation, not only to the Incarnation, but to the Crucifixion, and to the Resurrection.

And it is so important, so powerful, so central, that we should not forget it when Good Friday falls on 25 March, and that we should remember and celebrate that yes today.

A float in the Good Friday procession in Barcelona on 25 March 2016 (Photograph: Patrick Comerford, 2016)

(Revd Canon Professor) Patrick Comerford is Lecturer in Anglicanism, Liturgy and Church History, the Church of Ireland Theological Institute. This reflection was shared at the Eucharist in the institute chapel on 4 April 2016.

John Donne, ‘Upon the Annunciation and Passion Falling upon One Day’ (1608)

Tamely, frail body, abstain today; today
My soul eats twice, Christ hither and away.
She sees Him man, so like God made in this,
That of them both a circle emblem is,
Whose first and last concur; this doubtful day
Of feast or fast, Christ came and went away;
She sees Him nothing twice at once, who’s all;
She sees a Cedar plant itself and fall,
Her Maker put to making, and the head
Of life at once not yet alive yet dead;
She sees at once the virgin mother stay
Reclused at home, public at Golgotha;
Sad and rejoiced she’s seen at once, and seen
At almost fifty and at scarce fifteen;
At once a Son is promised her, and gone;
Gabriel gives Christ to her, He her to John;
Not fully a mother, she’s in orbity,
At once receiver and the legacy;
All this, and all between, this day hath shown,
The abridgement of Christ’s story, which makes one
(As in plain maps, the furthest west is east)
Of the Angels’ Ave and Consummatum est.
How well the Church, God’s court of faculties,
Deals in some times and seldom joining these!
As by the self-fixed Pole we never do
Direct our course, but the next star thereto,
Which shows where the other is and which we say
(Because it strays not far) doth never stray,
So God by His Church, nearest to Him, we know
And stand firm, if we by her motion go;
His Spirit, as His fiery pillar doth
Lead, and His Church, as cloud, to one end both.
This Church, by letting these days join, hath shown
Death and conception in mankind is one:
Or ’twas in Him the same humility
That He would be a man and leave to be:
Or as creation He had made, as God,
With the last judgment but one period,
His imitating Spouse would join in one
Manhood’s extremes: He shall come, He is gone:
Or as though the least of His pains, deeds, or words,
Would busy a life, she all this day affords;
This treasure then, in gross, my soul uplay,
And in my life retail it every day.