The Ascension depicted in the East Window in Saint Seiriol’s Church at Penmon Priory, near Beaumaris (Photograph: Patrick Comerford, 2016)

Today is Ascension Day [5 May 2016]. This afternoon, I hope to bring a visiting group from the Church of Sweden to visit Christ Church Cathedral, Dublin, and later in the day I hope to take part in the Choral Eucharist for Ascension Day sung by the Cathedral Choir.

The procession hymn this evening is ‘Hail the day that sees him rise,’ by Charles Wesley and Thomas Cottrill, vicar of Lane End, Staffordshire, sung to the tune Llanfair. This tune is said to have been written by the Welsh singer and blind composer Robert Williams (1781–1821) of Anglesey. The Llanfair that gives its name to this hymn is Llanfair PG, the village with the longest name on these islands, near the place where Williams was born and which I visited last weekend.

I am sure the editors and typesetters of many hymnals, and the person who put together this evening’s service sheet are happy, for the sake of appearances alone, that the tune was written before the longer name of the village was concocted and that it is known by the town’s shorter name.

Earlier this week [2 May 2016] in Anglesey, when I was visiting Saint Seiriol’s Church at Penmon Priory, outside Beaumaris, I photographed a beautiful stained glass window illustrating the Ascension.

This three-light East Window in the Chancel of Penmon Priory Church, dates from 1912. The centre window depicts Christ in glory, holding the chalice and the host, with rays of light emanating from the wounds in his hands and feet. He is surrounded by the symbols of the four evangelists. 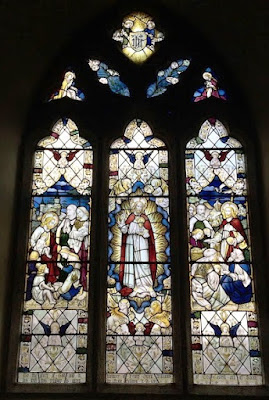 The three-light East Window was given in memory of Sarah and Henry Owen Williams in 1912 (Photograph: Patrick Comerford, 2016)

This window, with its Anglo-Catholic sacramental imagery, was given in 1912 in memory of Henry Owen Williams and his wife Sarah (Holborn) of Tre-Castell, near Beaumaris, by their children. Their children included the Revd Raymond Owen Williams, who was presented to the Vicarage of Fisherton Delamere in Wiltshire by Athelstan Riley (1858—1945), the Anglo-Catholic hymn writer and hymn translator.

In the left-hand light window, Sarah Williams is shown with the women and children being blessed by Christ. Henry Williams is depicted in the right-hand light, in a scene depicting the blessing and distribution of the loaves and fishes.

Fragments of the original East Window in the Priory Church can be seen in a small stained glass window that is the east window of the south transept. This window depicts the Priory’s founder, Saint Seiriol, watching Saint Christopher carrying the Christ Child across a river.

The head of Saint Christopher, his right hand, Christ’s orb, and the right hand of Saint Seiriol with parts of his staff are mediaeval. These were worked into a new window ca 1855 by David Evans (1793-1861), who imitated mediaeval styles in the remaining work in the window. A second window by Evans in the Priory Church from the same time shows Saint Catherine and a bishop.

David Evans was born at Llanllwchaiarn near Newtown. He worked in partnership with Sir John Betton of Shrewsbury (1765-1849) from 1815 as Betton & Evans, and I am familiar with some of their windows in Lichfield Cathedral (1819).

Evans retained the name of the firm after Betton retired in 1825. Examples of Evans’s work in Wales can also be seen in Bangor Cathedral, including three of the Evangelists – Saint Luke Saint Matthew and Saint Mark – three prophets, Aaron, Moses and David, and three Epistle writers, Saint Peter, Saint John and Saint Paul. 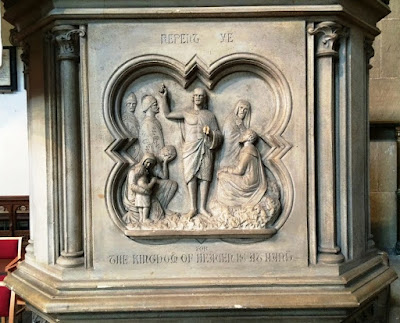 The Kingdom of Heaven is at hand … but the left hand is missing (Photograph: Patrick Comerford, 2016)

The salvaged right hand of Saint Seiriol in this window in Penmon Priory came to mind later on Monday afternoon as I wondered about the mysterious, missing left hand of Saint John the Baptist in a panel on the pulpit in Bangor Cathedral.

The two relief panels on the sides of the pulpit are carved in Caen stone and were designed around 1880 by Sir George Gilbert Scott as part of his restoration of Bangor Cathedral.

One panel depicts the mission commission to the disciples after the resurrection, with the text: ‘Go ye into all the world & preach the Gospel to every creature’ (Mark 16: 15).

The other panel depicts Saint the Baptist preaching to a group of six, including two Roman soldiers and a mother and child. The inscription on this panel reads: ‘Repent ye for the Kingdom of Heaven is at hand’ (Matthew 3: 2). Saint John the Baptist has his right hand raised as he preaches. But the one part of the panel that is missing – whether by vandalism or accident, I do not know – is his left hand.

The opening words of this evening’s Psalm at the Choral Eucharist are: ‘O clap your hands together all ye peoples’ (Psalm 47: 1).

God our Father,
you have raised our humanity in Christ
and feed us with the bread of heaven.
Mercifully grant that, nourished with such spiritual blessings,
we may set our hearts in the heavenly places;
where he now lives and reigns for ever.