Golden balls, spheres within spheres,
and finding time for Cricket in summer 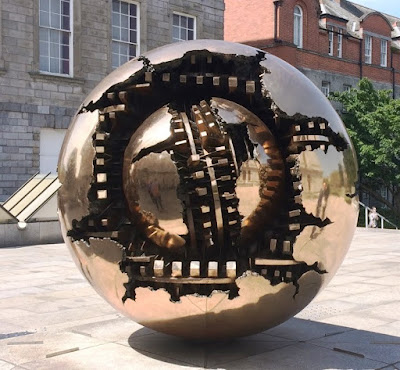 As the summer sunshine continues to bathe Dublin for this bank holiday weekend, the tourists are gathering in increasing numbers in Trinity College Dublin.

As I made my way through college yesterday afternoon [3 June 2016] to an academic committee meeting in the Arts Block, I noticed awnings have been erected outside the Old Library to protect the people queueing to see the Book of Kells.

But the other major attraction for tourists at TCD is in the forecourt in front of the Berkeley Library. The ‘Sphere Within Sphere’ (Sfera con sfera) is a bronze sculpture by the Italian sculptor Arnaldo Pomodoro.

The ‘Pomodoro Sphere’ was donated to the college by Arnoldo Pomodoro in 1982, with support from TCD and Italian organisations. It has since become one of Trinity’s most famous pieces of artwork. It is one of a large collection of similar spheres that are hosted in world.

The sphere is a familiar aspect of Trinity, but it seem there is no definitive explanation as to what the ball means. Some say the internal ball represents earth while the larger ball denotes Christianity, evoking the thought that religion is larger than the world.

Others say the fractured sphere ‘reveals a complex inner sphere that represents the harsh difficulties of the modern world at the end of the second millennium.’

And there are those who say the internal machinery of cogs and gears are ‘akin to the complex interlocking systems of language or of organic bodies.’

Trinity’s golden ball underwent a major cleaning, conservation and restoration project in the summer of 2008. This brought the surface of the piece back to its original condition while also restoring its complex sub-structure and pivot.

Both the internal and external parts were repaired. The first section of the project involved ‘engineering restructuring to repair the bearing in order to restore the movement function’ of the ball which spins when pushed. The second element restored the finish of the previously grimy globe.

Similar spheres exploring this spherical format are on display at other political, religious and educational centres across the globe. For example, the sphere at the Cortile del Belvedere at the Vatican Museums in Rome is twice the size of the sculpture in Dublin.

There are other versions of the sculpture, varying in size and diameters, around the world. These many settings worldwide include the Italian Ministry of Foreign Affairs at the Palazzo della Farnesina, Rome; the plaza at the UN Headquarters, New York; the Hirshhorn Museum and Sculpture Garden, Washington; the Christian Theological Seminary, Indianapolis; Columbus Museum of Art, Columbus, Ohio; de Young Museum, San Francisco; Tehran Museum of Contemporary Art, Tehran; Des Moines Art Center, Des Moines; Hakone Open-Air Museum, Hakone; University of California, Berkeley, where the artist lectured for a time; and Tel Aviv University.

But whether the golden sphere represents to the world, the embrace of Christianity or cogs within cogs or wheels within wheels, there was another attraction at I made my way from the Lincoln Place Gate to the Arts Block.

It was a perfect summer afternoon for cricket. Oh, if only this is going to be a summer with enough time to enjoy cricket on sunny afternoons.