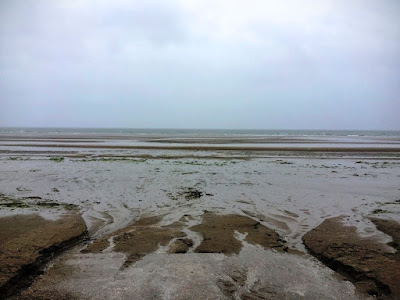 It looked like a winter’s day in Bettystown, Co Meath, this afternoon (Photograph: Patrick Comerford, 2016)

Is this summer? It’s warm, but the wind makes it feels cold, and it is so wet and the rain is so persistent that it looks and feels link a rainy Sunday in late autumn.

It was so wet this afternoon that the beaches in Bettystown and Laytown on the coast of Co Meath were all but deserted.

Two of us went for a late lunch this afternoon in Relish, and I expected the place to be full, not just because of their wonderful food and warm welcome, but because today is Fathers’ Day. But we got a table by one of the windows, with a view out across the sand dunes and out to the Irish Sea.

After lunch we went for a short walk on the beach. But the rain mean the hollows and rivulets left by the receding tide had been filled with water, and it looked not so much like autumn, but like winter. 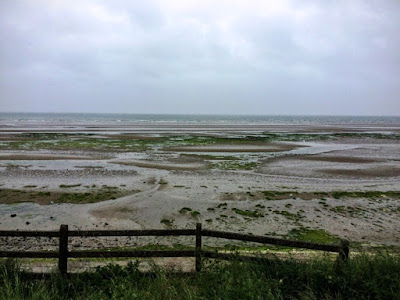 And it looked like a winter’s day on the beach in Laytown too (Photograph: Patrick Comerford, 2016)

Later we stopped at Laytown, to look out at the beach there. But the rain was still pouring down, and so we decided to go up the hill behind us to look at the railway station, which is one of the great unknown pieces of the architectural heritage of Co Meath. 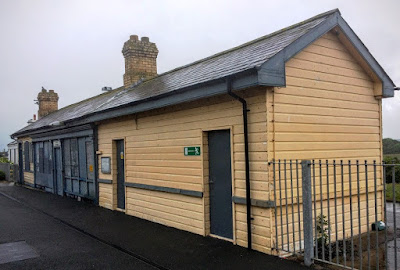 Laytown Railway Station, with the station, pedestrian bridge and the station master's house, forms a significant architectural group in Laytown. The new station and two workmen’s houses were built by the Dublin & Drogheda Railway Co, and the station opened on 25 May 1844.

This detached, nine-bay single-storey railway station, was designed by an unknown architect. It had a pitched slate roof, yellow brick chimneystacks and cast-iron water goods.

There were timber clapperboard walls, with a string course at sill level, and it is set on a stone plinth. There were segmental-arched openings with timber block-and-start surrounds, timber sash windows, a timber pilaster and entablature shopfront, and panelled timber doors

There are stone embankment walls flanking the tracks, and a cast-iron pedestrian bridge on the site.

Laytown station was rebuilt by the Great Northern Railway after 1876, when the station acquired a typical GNR wooden station building on the up platform, a waiting room on the down platform, signal cabin and footbridge.

Today, however, only the main wooden station building remains, along with the unusual station master’s house, which is an original Dublin & Drogheda Railway structure. 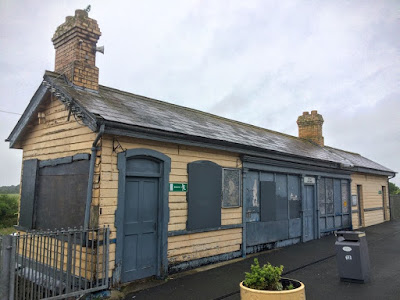 The timber construction of the building gives the station at Laytown its particular architectural interest. The timber detailing of the building imitates those commonly found in stone railway buildings, with the block-and-start surrounds and string course.

The Great Northern Railway renamed the station as Laytown & Bettystown in 1913, but it has since returned to the original name, Laytown.

Laytown station’s footbridge was probably produced by Manisty’s Foundry, which produced footbridges for other stations on the line, including Dundalk and Rush and Lusk. The original cast iron footbridge has been replaced by a modern bridge which lift shafts. At the south end of the station the line crosses the River Nanny.

Laytown suffered a nasty fire recently, the roof was destroyed and the chimney stacks were scorched. It is now boarded up, and looks sadly desolate, particularly on a bleak afternoon like today’s. It is impossible to know what it is like inside, or to assess what has been destroyed and what can be saved. Hopefully, someone in Iarnrod Eireann has vision to retain and restore this part of Irish railway architectural heritage.

Having written yesterday about the “Irish Wine Geese” and their influence on the vineyards of Bordeaux, I am at home this evening, enjoying a bottle of Bordeaux that came as a present for Fathers’ Day. 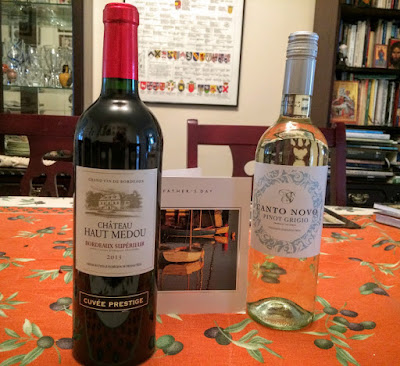