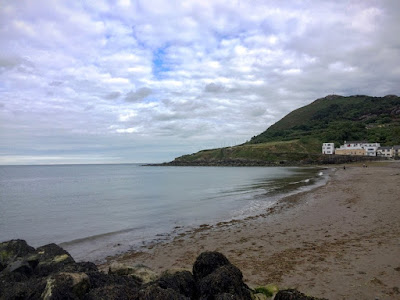 Walking on the beach below Bray Head this afternoon (Photograph: Patrick Comerford, 2016)

It 10 days since I had a walk along a beach. Until this afternoon, I had not been on a beach since my holidays in Rethymnon on the Greek island of Crete came to an end on Wednesday of last week [20 July 2016].

A walk on the beach in Bray, Co Wicklow, was not an option last weekend, knowing that the seafront was going to be crowded with people attending the Bray Air Show, so two of us went to Farmleigh and the Phoenix Park instead, and walk around the boating lake. And on Sunday we had a long, lingering lunch with friends from Christ Church Cathedral, that stretched well into the late afternoon.

A glass of Nuragus in Carpe Diem this afternoon (Photograph: Patrick Comerford, 2016)

But this afternoon, two of us got to Bray in the late afternoon, and first had a late Saturday lunch in Carpe Diem – including doubles espressos and a glass of Nuragus.

Nuragus is a white Italian wine grape variety that is grown in Sardinia. It has a long history on Sardinia and may have been introduced to the island by the Phoenicians. The grape is still widely planted in Sardinia, but its numbers began to dwindle in the late 20th century, falling by 50% during the 1980s alone to a total of 8,700 ha in 1990.

Today it is mostly found in the southern part of the island, between Cagliari and Oristano on the hot Campidano plain. Under Italian wine laws, Nuragus grown in southern Sardinia may be labelled under the Nuragus di Cagliari DOC, as long as the grape makes up at least 85% of the blend with other local white grape varieties.

Well-made examples of Nuragus have aromas similar to Vermentino with almonds and sour apple flavour notes. It has been compared to Portugal’s Vinho Verde and Spain’s Albarino wines.

From Carpe Diem, we went for a long walk on the seafront. The tide and the waves were gentle compared to the tides and the waves we had experienced on the beaches in Rethymnon earlier this month, and – while it felt more like an autumn day than summer – a few people, and a dog or two, braved what must have been chilly waters for a swim.

We walked as far south as the bay below Bray Head, then retraced our steps and walked as far north as the harbour, where there was no sailing but a large number of swans.

The sea front is busy with a fun fair, and just as our walk came to an end the sun began to come out again. 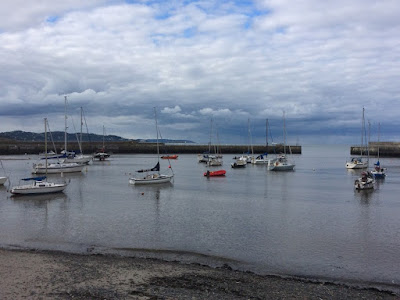 Posted by Patrick Comerford at 19:52