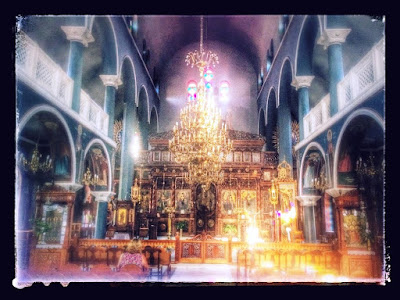 I have accumulated a number of these sources in Crete in recent days. The buses into Rethymnon are usually so packed when they get Platanes, with tourists crammed into every possible space, they do not even bother to stop at my local stop outside Julia Apartments.

Inevitably, the next bus is going to be packed with those left behind at the earlier stops. If not, the queue is now longer, and there is going to be a mad scramble for any available places. Did I just say queue. Sorry. There is no such thing as queueing in Greece, and certainly not among tourists who have spent all day at the beach and now want to eat out and have a few drinks.

Despite the dozens of people waiting to scramble onto the buses all along the coastal route that stretches east of Rethymnon, my “sources” tell me that tourism in Crete is down about 10 per cent this year. The blame this on the political and economic uncertainty in Britain in the run-up to the ‘Brexit’ referendum, and expect the number of British tourists to decline even further with growing uncertainty in Britain about the British place in Europe and with a further fall in the value of sterling.

I asked myself how many taxi drivers who were driving around Parliament Square in Westminster, honking their horns in glee as the referendum results came in, have such a shrewd analysis of Greek politics and economics? 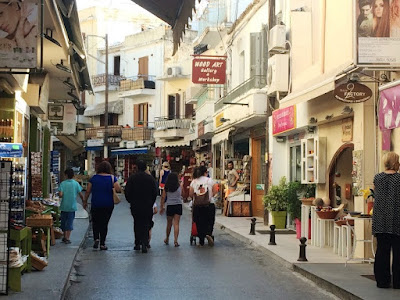 The other major change in tourism is the arrival of tourist on the all-inclusive package. They eat in their hotels, they seldom venture out to local restaurants, and when they do they are part of a coach tour. They never get to meet local people, and, as I was reminded a few times, they never or seldom ever use local taxis.

When they use taxis, the conversations can be surprising. One driver told me of a family staying in a large plush hotel who did not know the name of the nearby town. They asked to be taken to a good restaurant, and knew nothing about Rethymnon – its history, its culture, its architecture … they did not even know its name, they just wanted to be taken to a good restaurant “in town.”

Another family did not know Crete was in Greece. They just went to a travel agent and asked for an island holiday in the sun. It might have been Majorca, Tenerife, or Turkey. “Is Crete in Greece? I thought the signs looked funny.”

But we kept one particular crisis in Greece in mind last night. Once again we visited a local pharmacist to support the work of a centre that is trying to make a difference and bring about change in the midst of these crises. In the back streets, away from the gaze of tourists, the Voluntary Welfare Clinic Rethymno (Εθελοντικό Ιατρείο Κοινωνικής Αλληλεγγύης Ρεθύμνου) works from a storefront crèche in Kastrinogiannaki Street, where there are no tourist shops, yet only a few steps away from the seafront, the restaurants and the bars.

Some of the hidden work here includes helping refugees and migrants trace missing family members. The people who work at this clinic are hard-pressed, their workload is heavy, and the numbers needing attention continue to grow. 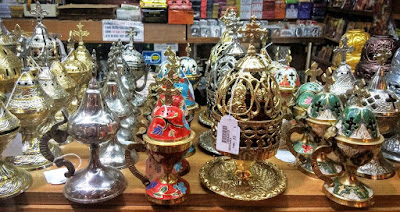 Censers and religious goods in a shop window in Rethymnon (Photograph: Patrick Comerford, 2016)

From the pharmacist’s shop we crossed into the square and visited the Cathedral, where we prayed for the refugees, those caught up in the present crises in Greece, and those who work with them.

Despite what my reliable sources tell me, the streets and side-streets of Rethymnon were crowded with shopping tourists. After dinner in Kyria Maria, a tavern in Moschovitou Street in the side-streets, laneways and alleys between the Rimondi Fountain and the Loggia, we strolled down to the harbour, which is crowded with fish restaurants looking out onto the boats and caiques, with its landmark lighthouse at the end of an harbour pier.

It was a calm and beautiful Mediterranean summer’s evening. But it was hard not to think of refugees trying to cross the same waters to reach other Greek islands, the oh so many people waiting to scramble onto small boats, not knowing the names of any particular island, but hoping to reach safety in Europe, any European country.

We had missed sunset on the other side of the harbour wall. My reliable sources, my usually reliable sources and my sources close to the government tell me it sets every evening and not to worry – even if I miss the bus in Platanes, they can get me the harbour in Rethymnon for another sunset.