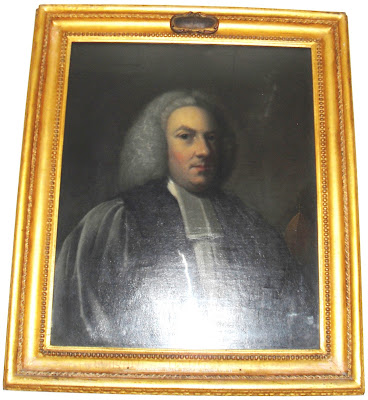 The portrait of John Garnett, Bishop of Ferns and later Bishop of Clogher, on the stairs leading to the Old Library in Sidney Sussex College, Cambridge (Photograph: Patrick Comerford)

I am staying in Sidney Sussex College, Cambridge, this week while I take part in the annual conference of the Institute for Orthodox Christian Studies. Earlier this week [28 August 2016], I wrote about the portrait that hangs in the Old Library of John Bramhall, Bishop of Derry and later Archbishop of Ireland. But their is a second painting of a Church of Ireland bishop in Sidney Sussex. The portrait of John Garnett (ca 1709–1782), Bishop of Ferns and Leighlin and later Bishop of Clogher, can be seen on the stairs leading up to the Old library, where Archbishop Bramhall’s portrait hangs.

John Garnet went to school in Beverley, Yorkshire, and at the age of 16 he was admitted to Saint John’s College, Cambridge, on 21 May 1725. However, on 13 September 1728, he moved as a Scholar to Sidney Sussex College, where his father had been a student, and graduated from here (BA) in 1729.

He was ordained deacon by the Bishop of Lincoln, Richard Reynolds, on 24 May 1730, and became a fellow of Sidney Sussex that year, and curate of Barmston in the Diocese of York 1731. He proceeded MA in 1732 and was ordained priest by Reynolds of Lincoln on 8 April 1733. He was incorporated MA at Oxford University in 1738, received his BD at Cambridge in 1739, and was a Whitehall Preacher in 1739-1741 and a chaplain to the Duke of Devonshire.

From 1744 to 1752, he was Lady Margaret Preacher to the University of Cambridge. This position, now known as Lady Margaret’s Professor of Divinity, is regarded as the oldest chair in Cambridge, and previous holders of this position have included John Fisher (1502) and Desiderius Erasmus (1511). In 1745, he preached a sermon before the university at Great Saint Mary’s, the university church, during the Jacobite rebellion. Meanwhile, he was appointed Rector of Lockington in East Yorkshire in 1748.

He was still holding his academic and parochial positions in Cambridge and Yorkshire when he went to Ireland in 1751 as chaplain to the Lord Lieutenant, Lionel Sackville, 1st Duke of Dorset. He decided to remain in Ireland, resigned his Fellowship at Sidney Sussex and his chair in Cambridge, and in 1752 he was appointed Bishop of Ferns and Leighlin in succession to Robert Downes. He was incorporated at Trinity College Dublin in 1752 and received his Doctorate in Divinity (DD) from Cambridge that year.

In a sermon in Christ Church Cathedral, Dublin, on 5 November 1753, to mark the anniversary of the Gunpowder Plot, he condemned holy war and ‘that pious solecism in holy-church politicks,’ which for so long had nurtured the associated mythologies of holy war. Such ‘infantile rhetoric’ and ‘infantile theology’ must, he predicted, ‘be now no more.’

He was translated to Clogher in 1758, succeeding Robert Clayton who had died before he could be tried for heresy. Garnett was succeeded in Ferns by William Carmichael, who later became Archbishop of Dublin.

In 1765, Garnett was spoken of, alongside John Ryder, Archbishop of Tuam, as a possible successor to William Carmichael as Archbishop of Dublin. But the appointment went instead the Irish-born Bishop of Meath, Arthur Smyth (1706-1771), and Garnett remained Bishop of Clogher until his death. There he contributed from his personal income to rebuild the cathedral and the bishop’s palace.

John Garnett died at his townhouse in Leinster Street, Dublin, on 1 March 1782 and was succeeded as Bishop of Clogher by John Hotham. There is a mural tablet to his memory in the chancel of Saint Lawrence’s Church, Sigglesthorne, where his father was rector, and portraits of him in both Saint John’s College and Sidney Sussex College, Cambridge.

The only work of Garnett, besides some occasional sermons, was his prolix Dissertation on the Book of Job (1749). On seeing it at the house of the Duke of Newcastle, to whom it was dedicated, Lord Morton remarked that it was ‘a very proper book for the ante-chamber of a prime minister.’ A second edition was published in 1752, when Garnett became a bishop. In all, 53 editions were published between 1749 and 2005.

In his book, Garnett proposed that the Book of Job refers to the period of the Babylonian captivity, and that Job represents the oppressed and exiled people. It was original thinking for an 18th century theologian.

Williamstown House, near Kells, Co Meath, was built in a Palladian style ca 1770 for the Cuffe family, was later owned by the descendants of John Garnett. The Revd George Garnett, who also owned 304 acres at Knockglass, Crossmolina, Co. Mayo, died in 1856. He left Williamstown House to his eldest son, William Stawell Garnett (born 1838). During and after the Great Famine many of the Garnett family moved to the US, Canada, Australia, New Zealand, South Africa, Fiji and England.

According to Philip Skelton’s biographer, Samuel Burdy, Bishop Garnett was ‘a pious, humble, good-natured man, a generous encourager of literature, kind to his domestics, and justly esteemed by all those who had an opportunity of knowing his virtues.’