‘If evil is bottomless, so
goodness too is boundless’ 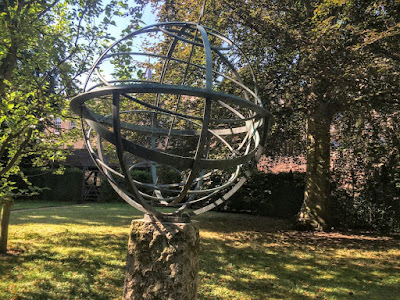 ‘If evil is bottomless, so goodness too is boundless,’ the Romanian writer and theologian Nicolae Steinhardt wrote while he was in prison. This afternoon, Dr Razvan Porumb introduced the writings and thoughts of ‘Father Nicolae Steinhardt’ at the summer conference in Sidney Sussex College, Cambridge, organised by the Institute for Orthodox Christian Studies.

This year’s conference is looking at ‘Contemporary Fathers and Mothers of the Church. Dr Porumb, who is Vice-Principal of the IOCS, where he is a postdoctoral fellow and a lecturer sketched out the life of the Romanian theologian, hermit, confessor and dissident writer, Dr Nicolae Steinhardt (1912-1989).

Nicolae Steinhardt is one of the great writers in Romanian literature, and is studied nation-wide. His great work, The Diary of Happiness, or The Journal of Happiness, is his literary testament and stands between literature and theology, culture and faith, but has not yet been translated into English.

He was born Aurelian Nicolae Steinhardt in Bucharest into a Jewish family and completed his PhD in constitutional law. On a holiday in Switzerland in 1937 or 1938, he met an Irishman who first stirred his interests in Christianity, although later he could not recall his name.

He was a writer and journalist, and was imprisoned in 1958 and was held in harsh conditions for 14 years. In jail, he taught English literature to other prisoners. There too he converted to Orthodox Christianity while he was a prisoner, and was baptised in prison in 1960.

He was fascinated by the paradox of faith, but he sought ambiguity rather than clarity: ‘Never have more astounding words been uttered than “Lord, I believe; help my unbelief!” [see Mark 9: 24] I tell myself that if, of all words on the entire Bible we would only retain these, they would be enough to prove the divine essence of Christianity … They are paradoxical, they represent the very mystery of the act of faith …’

His baptism took place hurriedly in extraordinary circumstances, with is fellow prisoner, Father Mina Dobzeu, a Romanian Orthodox priest using chipped enamel mug filled with wormy water from the water tank, and witnessed by two Greek Catholic (Uniate) priests, two Roman Catholic priest and a Protestant pastor. He would rejoice that his baptism had an ‘ecumenical character.’

He noted in his diary: ‘Those baptised as infants cannot know, nor can they suspect what baptism means. I find myself assaulted, second after second, by ever-stronger attacks of joy … I am a new man.’

He later had an Epiphany moment in a dream in his cold cell in the winter of 1962: ‘I do not see the incarnated Christ, but only an enormous light – white and bright – and I feel unspeakably happy. This light envelops me from all sides, it is complete happiness, and it ousts everything else. I am submersed in the blinding light, I float inside the light, I am in light and I exult. I know it is going to last forever, it is perpetuum immobile. The light speaks to: I am, not through words – but through thoughts. I understand it is the Lord and that I am inside the light of Tabor, and I don’t just see it, but I am living inside of it.’

He continued: ‘More than anything, I am happy, happy, happy. I am happy and I recognise that I am, and tell myself that. The light seems to be brighter than light and it seems to talk to me and tells me who it is. The dream seems to go on for long, very long. Happiness not only lasts forever, but increases constantly. If evil is bottomless, so goodness too is boundless.’

On his release in 1964, he remained a dissident and continued to write and publish. Late in life, he entered Rohia Monastery in 1978, where he worked as the monastery’s librarian and continued to write. There, his growing reputation as a counsellor and father-confessor attracted many visitors to Rohia. He died on 29 March 1989. 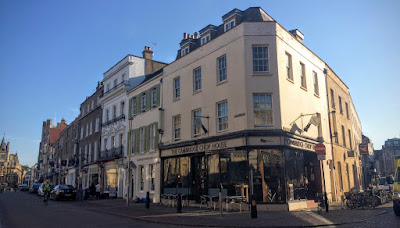 Sunshine this morning on King’s Parade, Cambridge, at the corner with Bene’t Street (Photograph: Patrick Comerford, 2016)

Later this afternoon, the Romanian theologian and priest, the Revd Dr Liviu Barbu, spoke on: ‘What it takes to be a saint today? A tentative sketch of a profile.’

Dr Barbu, who has a PhD from King’s College London on Orthodox pastoral theology, is a parish priest in Norwich. He has written extensively on Metropolitan John Zizioulas, Saint Gregory Palamas, spiritual direction and fatherhood, and on ascetism.

In our lives, we all have glimpses of the Kingdom. The unavoidable vocation of the Christian is sainthood, and holiness is our destination. Indeed, in the Apostolic times, all Christians were called saints.

He too drew on the work of Father Dumitru Stăniloae, the Romanian Orthodox priest, theologian and professor we heard about yesterday [29 August 2016].

Here and now, God calls us all to holiness, and he concluded. ‘The greatest joy of my life is that I am called to be a saint.’

Earlier this morning, Metropolitan Kallistos of Diokleia spoke on ‘Elder Amphilochios of Patmos,’ and Dr Christine Mangala Frost presented a paper on ‘Signs and Wonders: a Comparative Study of Spiritual Elders in Orthodox Christian and Hindu Traditions.’

Again, the day concludes with Evening Prayer and dinner. After breakfast tomorrow morning [31 August], we leave for our visit to the Monastery of Saint John the Baptist, near Tolleshunt Knights in Essex. The programme there includes a tour of the monastery and a lecture by Sister Magdalen on ‘Mother Elisabeth (1893-1993).’

This a given! How else could we say, "love is a many splendoured thing", and mean and demonstrate it.