Finding Christ in the garden
and the gardener as a priest 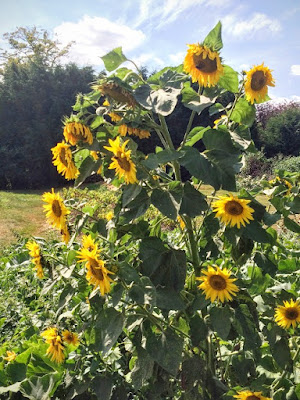 Sunflowers in the garden at Monastery of Saint John the Baptist, near Tolleshunt Knights in Essex (Photograph: Patrick Comerford, 2016)

I heard a story this morning of a monk from Cyprus who was the gardener in his monastery. He was happy at his work, growing vegetables, tending the vines and orchards, bringing the flowers to bloom, and looking after the soil, in season and out of season.

One day, the Abbot called him aside and told him he wanted him to be ordained.

The monk was perplexed. He was from a simple farming background and had never thought about being ordained a priest.

Despite his protests, he was ordained a priest.

Often, while the monks were praying the offices or hours in the chapel, Father John was still out on his tractor, looking after the garden, the flowers, the vegetables, the vines and the orchards. They needed constant attention, Father John understood nature, and there he prayed with them.

Rassophore (ρασοφόρος): when the novice becomes a monk, he is clothed in the first degree of monasticism and receives the tonsure.

Stavrophore (σταυρoφόρος): when some years after the first tonsure the abbot feels the monk has reached an appropriate level of discipline, dedication, and humility. This degree is also known as the Little Schema.

Great Schema (μεγαλόσχημος): Monks whose abbots feel they have reached a high level of spiritual excellence, they reach the final stage, known as the Great Schema.

In his dying days, Father John received the Great Schema from the Abbot. He died a few days later, but his gardens continue to bloom and to blossom, and both he and his generosity are still remembered by the villagers many years later.

Shortly after hearing this story this morning, I found myself face to face with a fresco depicting the Resurrection scene where Mary Magdalene in the garden mistakes the Risen Christ for the gardener.

But if priesthood is about presenting Christ to the people, and the people to God in Christ, then it seems there is something spiritually beautiful and appropriate about the monk-gardener becoming a priest, and that the Risen Christ might at first sight be confused with the gardener.

After breakfast this morning [31 August], we left Sidney Sussex College, Cambridge, for our annual visit to the Monastery of Saint John the Baptist, near Tolleshunt Knights in Essex.

It was the last day of the summer conference organised by the Institute for Orthodox Christian Studies, and the programme included a tour of the monastery and a lecture by Sister Magdalen on ‘Mother Elisabeth (1893-1993),’ and also offered an opportunity for walks in the monastery garden and the Essex countryside. 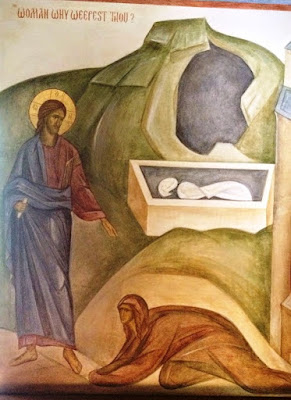 ‘Noli Me Tangere’ … a fresco of Mary Magdalene with the Risen Christ (Photograph: Patrick Comerford, 2016)

Posted by Patrick Comerford at 20:41

The monk was so qualified. the kind earth knew his blessing and his doubt.

When you had gone so far into the story,
The wondrous retelling and the awe,
How then could doubt rob it of its glory
By saying, “No, that is not what I saw!

I told a lie, in which you merely found belief;
The names were fake, there was no hammered cross
No cry of anguish; no good nor bad thief,
No gain from what was mourned as loss”.

Beyond all that, because they heard your tale,
And held it in the light of make-believe,
It shone, and in its glowing did not fail
To rend the pathos, sound the wells of grief

From which they filled their pitchers and their ire
And went crusading, killing in that name
They uttered as they built their million pyres
To roast the scapegoat basted with their blame.
So you tell on, avoid the glaring contradictions
The contra versions which condemn your myth,
Embellish with gold and frankincense the suave depictions
The candled luminosity, the ill-fit

Of complex layers you had deftly forgotten
The mouldering chapters eaten by the sands,
The patched empiricals rescued from the rotten
Papyrus, rolled and written by divers unknown hands.

Why not simply say what happened.
There was a man some
Called Jesus, who wove the unrequited tale of love,
Who blessed the child, the poor, and bade them come
Into the healing light. His symbol was a dove. - Frank Callery.