Nuclear warnings from the bunker
‘are now more relevant than ever’ 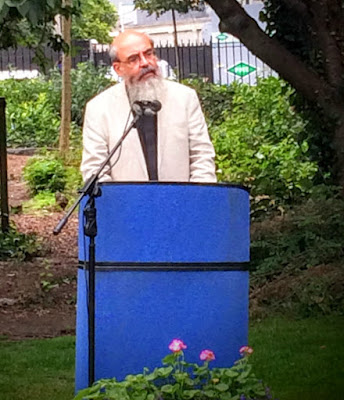 While I was speaking at the annual Hiroshima Day commemoration in Merrion Square, Dublin, this afternoon [6 August 2016], a Facebook friend was visiting a bunker in Portadown.

I have never met this Facebook friend, yet. But she told me later that the tour “was very fascinating.”

She went on the say: “Then the tour guide said we should get the book Do you want to die for NATO? by Patrick Comerford.”

“We will be getting the book,” she promised her husband, and told him “that’s Patrick Comerford my fb friend.”

She went to say that the tour guide shows my book to all who visit the bunker.

It was open day today at the bunker, which is 15 ft below a field on the outskirts of Portadown.

The former monitoring bunker is a relic of the Cold War, and was once part of a wider network of similar structures throughout the United Kingdom, built to study and report the effects of nuclear explosions and the resulting radioactive fallout.

They were operated by men and women of the Royal Observer Corps, who were expected to spend three weeks below ground during a nuclear exchange.

The bunker was closed in 1991 but it has now been fully restored to as it would have been in the 1980s at the height of the Cold War.

The guide who recommends my book is Alistair McCann, and the other guide in the bunker in Portadown this afternoon was Colin Woods.

I am flattered and amazed that Alistair McCann is recommending this book 32 years after it was first published in 1984, which is half a lifetime away.

At the time, I was chairing both the Irish Campaign for Nuclear Disarmament and Christian CND, and writing a post-graduate theology thesis comparing different attitudes in the Roman Catholic Church on nuclear weapons and nuclear disarmament.

As a consequence of a late night meeting in Sean MacBride’s home, Roebuck House, with Todd Andrews and Captain John Feehan, I was also commissioned to write my first book, which was published by Mercier Press in 1984 with a title that now seems very twee to me, Do You Want to Die for NATO? 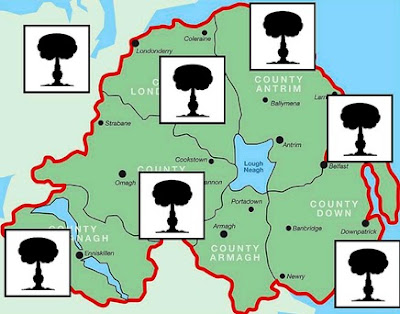 The ‘chilling map’ in the ‘Belfast Telegraph’ based on my book

Some years ago, the Belfast Telegraph published a “chilling map” that shows how Northern Ireland was marked for a nuclear Armageddon during the Cold War.

The report said the targets were pinpointed in Northern Ireland in 1980 in case the Kremlin decided to conquer the UK, and cited as its source my book Do You Want to Die for NATO?

The report went on to say: “Comerford said that at the same time the Soviets drew their map, British defence experts held secret maps in Belfast during the 1980s showing the spots they thought were likely to be hit by doomsday attacks. Belfast was first on the Soviet hit-list — with the city and international airports marked for attack.”

Ballykelly army barracks and the former US naval facilities at Lishally, both around Co Derry, were also marked down, and an airfield at St Angelo near Enniskillen, regularly used by the US air force in World War II, was marked for destruction by Russians. “To top it off, the Sperrin mountains that span Derry and Tyrone were primed for atomic holocaust because they were home to US Navy transmitters.”

The report went on to say: “In British intelligence maps, Comerford says RAF facilities in Bishopscourt, Downpatrick, were open to attack, along with army transmission hotspots in Antrim and Derry. A sea strike at Inishtrahull off the Donegal coast was also predicted, as was the bombing of military headquarters in Lisburn. And, with its military communications facilities, Omagh was regarded as a top target for the Reds in the event of nuclear war.”

The Telegraph said: “Comerford revealed the Soviets were most likely to have used the one-megaton SS-4 missile or an SS-11 intercontinental ballistic torpedo. Both warheads have a terrifying nuclear payload 50 times worse than the bombs that destroyed Hiroshima and Nagasaki in August 1945.”

It went to say Comerford said: “The strategic position of Ireland, the facilities offered by ports and airports, and the fuel stocks make it highly likely that Ireland will be a target.” He said the Republic was just as much at risk as Northern Ireland.

The reporter pointed out that I wrote this book in 1984, “but his warnings are now more relevant than ever.”

The book was written 32 years ago when I was 32. It is sad to realise that it is still relevant today. I was saying this afternoon that world tensions are as heightened today as they were at the height of the Cold War.

Perhaps the guides in the bunker need an up-to-date version of my book from the 1980s. If Mercier Press ask me to update it, I might consider renaming it: Do You Want to Die for Trump? 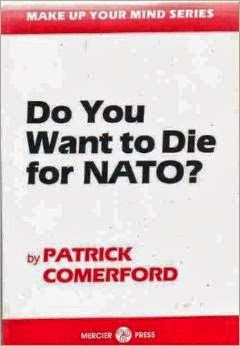 Perhaps a new edition my need to be called ‘Do You Want to Die for Trump?’