Singing with choirs and composers
from Saffron Walden to New York 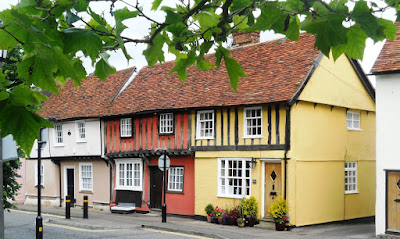 I am the canon-in-residence in Christ Church Cathedral, Dublin, this morning, preaching at the Cathedral Eucharist at 11 a.m. The celebrant is the Revd Abigail Sines, the new Dean’s Vicar of the Cathedral, and the setting is the Missa Brevis S Johannis de Deo by Franz Josef Haydn (1732-1809), sung by the Cathedral of Saint John the Divine in New York.

I am preaching on the Gospel reading, which tells the story of the woman who is healed by Christ in a synagogue and who is called by ‘Daughter of Abraham,’ and I also plan to draw on a sermon preached about 1650 years ago by the Cappadocian Father, Saint Gregory Nazianus, in which he talks about the poor and the marginalised being sharing the imago Dei.

The composer Arthur Brown gave the name ‘Saffron Walden’ to his setting for Charlotte Elliott’s hymn ‘Just as I am.’ He was born on 24 July 1830 in Brentwood, Essex, and named ‘Saffron Walden’ and many other hymn tunes after places in his native Essex.

He was a member of the London Gregorian Association, and helped to compile the Service Book for the annual festival in Saint Paul’s Cathedral. He supported the Oxford Movement, and pioneered the restoration of plainchant and Gregorian music in Anglican worship.

Brown edited a number of publications, including the Altar Hymnal. His also wrote settings for the Canticles and the Eucharist, a Children’s Festival Service, anthems, songs, part songs, and over 800 hymn tunes and carols.

The Good News from Essex; not even Nashe would have with you.

Two small words that contain all, 'and' between them the worn and twisted conjunction of their DNA.