Finding the Venetian
legacy of Crete in
a mountain village 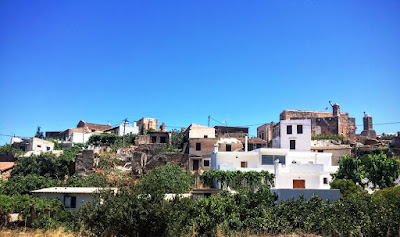 Crete is the largest and busiest of all the islands in Greece, and has been part of the modern Greek state for over a century. But Crete has inherited a mixed cultural legacy and in the town of Rethymnon, where I was staying again this summer, it is possible within a few narrow streets to come across, side-by-side, architectural and archaeological legacies from the Ottoman, Venetian, Byzantine, Roman and classical Greek periods.

The Venetians had a firm footing in Crete from the mid-12th century, and took a firm hold on the island during the Fourth Crusade and the fall of Constantinople in 1204.

They ruled Crete for more than 4½ centuries (1205-1669), when they built a string of defensive fortezzas along the northern coast, from the island of Gramvousa at the western end, through Chania, Soudha, Rethymnon, and Iraklion to Spinalonga at the eastern end of the island.

The Venetians knew Crete as Candia, and the island’s Venetian legacy also includes imposing and impressive churches, fountains, public squares and buildings and harbours – and even many family names. But the Venetian legacy can also be enjoyed in smaller villages in the mountains, above the busy towns and resorts. 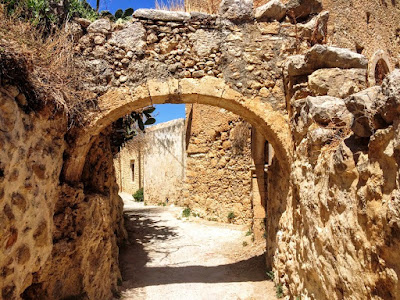 Strolling through the narrow streets and Venetian arches of Maroulas (Photograph: Patrick Comerford, 2016)

One morning this summer, on the way to Elafonísi in south-west Crete, I stopped briefly in the small village of Élos, and was surprised to find the Byzantine Church of Saint John the Theologian, decorated with important early 14th century frescoes attributed to Ioannis Pagomenos, a well-known icon writer and painter from western Crete working in the Venetian period.

On another early morning, two of us took a short taxi up to the sleepy hilltop village of Maroulas in the mountains above Platanes, where I was staying on the edges of Rethymnon. Although Maroulas is just five minutes away, the twisting, corkscrew road winds its way up by mountain valleys and gorges and through some of the oldest olive groves in Greece.

The once-fortified hilltop town of Maroulas is at a height of 240 metres, perched on a lofty hilltop overlooking olive groves and valleys and looking out to the sea.

Unlike many villages in Crete, Maroulas has no one single main square. Instead, the village is a maze of narrow streets and alleys, with Byzantine churches and chapels, with ancient tombstones dating back to antiquity, old Venetian towers and mansions with decorated doors and stone mosaics, renaissance ruins, Ottoman fountains, and over a dozen old oil presses – and a hidden church with a double nave that is partly built into a cave.

Maroulas is like a time capsule, but still there are typical Greek village tavernas and cafés to help while away the time on a lazy summer day.

Although most of the buildings that attract visitors to Maroulas date back to the Venetian period, the discovery of arched burial chambers has led archaeologists to suggest that the area may have been inhabited since the Minoan period. Two cemeteries of the palatial period of the Minoan civilisation have been found in the area and are now on display in the Archaeological Museum of Rethymnon. 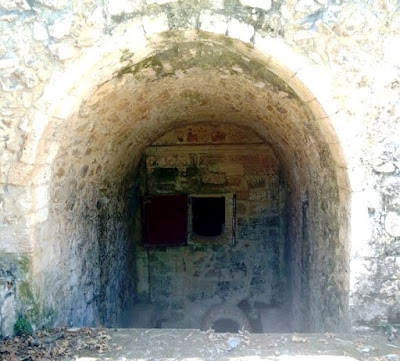 Maroulas takes its name from the well discovered by a shepherdess called Maroula (Photograph: Patrick Comerford, 2016)

It is said that the village was originally named Amygdalea, but it was completely destroyed by a flood or earthquake. The first person to move back to the village was a shepherdess called Maroula, a form of Maria. According to tradition, while she was grazing her sheep in the area, she found a spring of cool drinking water. She moved into the village, and so it was named after her.

This natural spring water fountain at Vryssi was the main water source of the village, supplemented by rainwater collected in tanks. Although the water at the fountain is no longer drinkable, this is a quiet, shaded place to rest under a spreading plane tree.

Some archaeological finds show the village was inhabited in Roman, early Christian and Byzantine times, but the main buildings in the village date from the late Venetian period in the 16th and early 17th century, and the Ottoman period, from the 17th to the 19th century. 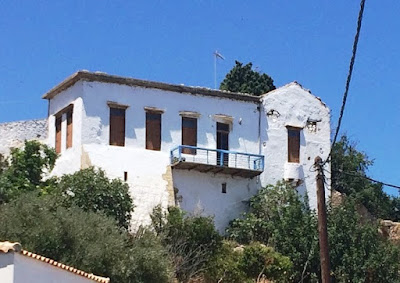 The place probably became a fortified town during the second Byzantine period, and continued to prosper after the Venetian invasions. After the Venetians took control of Crete, Maroulas became part of the castellated territories of the fortezza in Rethymnon in the 14th century. The Venetians built towers with battlements, tower houses and several mansions that display Venetian coats of arms on the arches and doors.

Many of the old Venetian mansions have battlements and typical Venetian doors and arches, some of them decorated with coats of arms or with humorous figures such as two welcoming hands.

During the first Venetian period, the houses of Maroulas became second homes in the cool mountains for the nobility of Rethymnon or were used as agricultural warehouses. The olive groves in the surrounding countryside were important for the local economy and the village had a large number of olive presses.

At one time, there were three towers in Maroulas. The first was probably built in the Byzantine period but has since collapsed. The second tower dates from the Venetian period, and stands by the cobbled street leading down to the fountain at Vryssi. 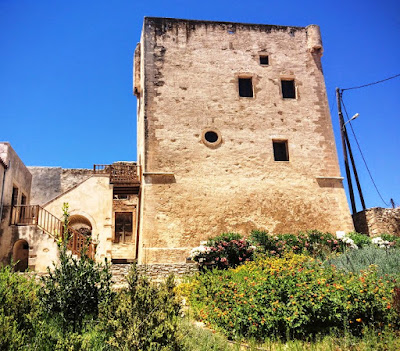 The largest Venetian tower house was restored in recent years and has become a symbol of Maroulas (Photograph: Patrick Comerford, 2016)

The third tower is seen as the emblem of the village. This imposing tower was recently renovated. It is 14 metres high and has three floors. It was built sometime in the 15th and 16th centuries and served as an observation point and as well as the home of a Venetian noble. Using fire and smoke, the watchmen on the tower could communicate with the fortress at the fortezza in Rethymnon. The tower had holes from which the guards could spill burning oil or tar on their enemies below. 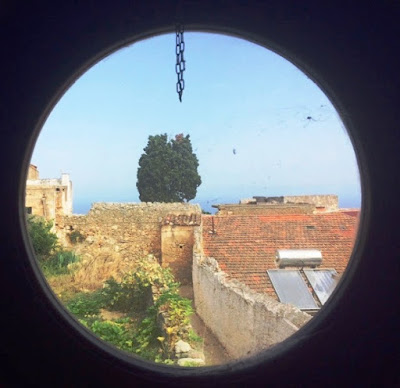 The main tower provides views across the countryside from Rethymnon to Iraklion (Photograph: Patrick Comerford)

There are other, smaller tower houses scattered through the village, many awaiting restoration. Later Venetian buildings were inspired by the works of the Venetian engineer Francesco Barozzi. They date from ca 1577, and have become known for their aesthetic and artistic features. 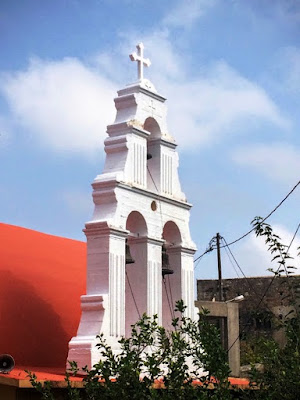 Seven or eight churches are scattered through the village and in the immediate surrounding hillsides. The main parish church was being repainted inside during an earlier visit last year. The smaller church next door has Byzantine fragments. The tiny chapel in the centre of the village has been locked and closed each time I have visited Maroulas. 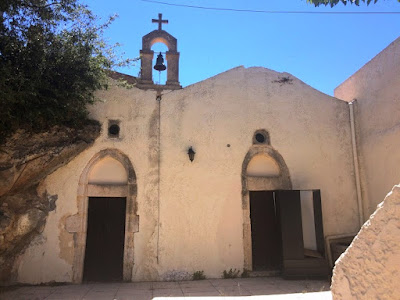 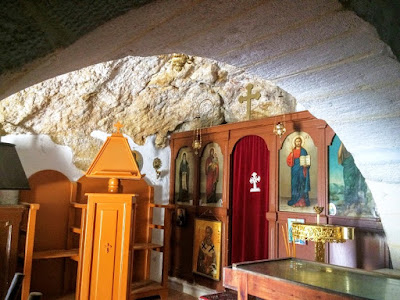 One of the naves of the double church is built into the rock of a cave (Photograph: Patrick Comerford, 2016)

The Church of Aghios Nikolaos (Saint Nicholas) and Aghios Antonios (Saint Anthony), the oldest church in the village, was built in the 14th century into a rocky hillside that almost forms a cave. It is a twin church, or two inter-connecting churches, with two separate naves, and the north side of the church is built into the cave that forms part of its north and east walls. A low arch links the two naves, forming one church with two separate icon screens and sanctuaries. 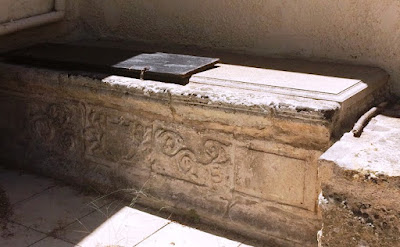 The Venetian sarcophagus in the churchyard of the interconnecting twin churches (Photograph: Patrick Comerford, 2016)

Outside, in the church yard, a mediaeval sculpted sarcophagus with early Venetian decorations may be the tomb of an early benefactor of the church. 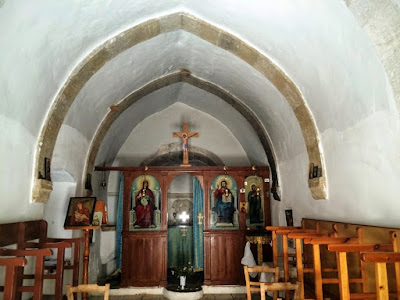 Inside Aghia Anna … a Venetian church behind the main tower (Photograph: Patrick Comerford, 2016)

Behind the main tower, the early Venetian Church of Aghia Anna (Saint Anne) has a plain interior, but when I visited it a few weeks ago swallows had nested in one of the roofbeams.

Beside it, the balcony of Taverna Katrina overlooks the plane below with breath-taking views to the fortezza of Rethymnon and the blue sea of the Mediterranean. 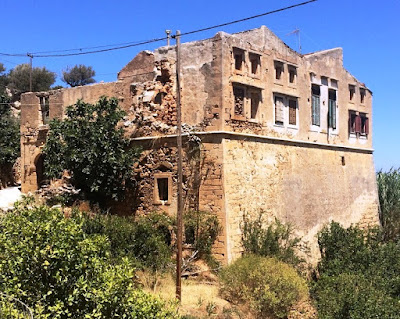 The Metochi is a complex of surviving Ottoman Turkish buildings (Photograph: Patrick Comerford, 2016)

Before the last parts of Venetian Crete fell to the Ottoman Turks in 1669, Turks had already started moving into Maroulas in 1630, and Maroulas became the country seat of Turkish officials who valued its strategic position and wealthy soil.

Crete was declared an Ottoman province in 1646, after the Ottomans conquered the western part of the island. But the Venetians held onto their capital Candia (present-day Iraklion) until Francesco Morisini surrendered the city in 1669. The offshore island fortresses of Soudha, Gramvousa and Spinalonga remained under Venetian rule until in 1715, when they too were captured by the Ottomans.

The Turks brought with them architectural elements from Anatolia, including fireplaces and chimneys, wells, hamams, fountains and cisterns and they used the main tower as an army base. 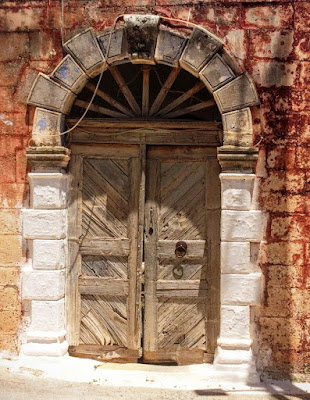 The Despotiko was the summer residence of the Archbishop of Rethymnon (Photograph: Patrick Comerford, 2016)

Crete became autonomous in 1896, and the last Turks left Crete in 1923. For a short time in the 1920s, the main tower and many buildings Maroulas housed Greek refugees who had been expelled from Anatolia in western Turkey after the disastrous war between Greece and Turkey.

In the 1920s and 1930s, Archbishop Timotheos Veneris of Rethymnon used the 17th century Venetian house known as the Despotiko as his summer residence. It has a cobbled courtyard and a Venetian doorframe that is similar to the entrance to the fortezza in Rethymnon.

The Metochi, a massive complex west of the settlement has traces of Renaissance and Islamic architecture, including a Turkish hamam or bath. But the Metochi was partly destroyed during a Nazi bombardment in May 1941 and the main tower in Maroulas was abandoned around the same time.

A journey in time 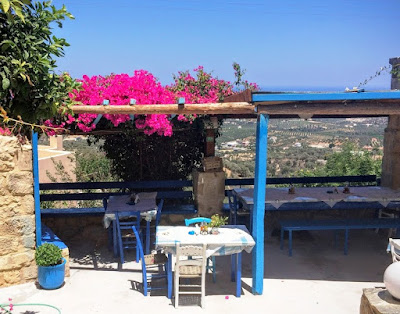 Taverna Katrina offers a balcony view across the plains of Rethymnon and out to the sea (Photograph: Patrick Comerford, 2016)

The population of the village began to fall after World War II and the Greek Civil War. In the 1960s and 1970s, young people left for the cities, leaving only the elderly behind. Many of the houses are still neglected or abandoned, and one taverna has been locked up for years, with all its furnishings and decorations decaying inside.

New hope came in 1985 when Maroulas was declared an “historic monument” for its historical monuments and houses.

The main tower was renovated and restored by the Municipality of Rethymnon in the mid-1990s, and in 1997 it was bought for the local community. Further restoration work was carried out in 2007-2013 under an EU-funded scheme to restore specific buildings of historical interest in both Greece and Cyprus. 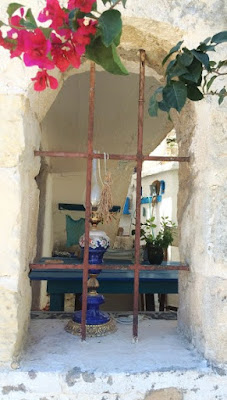 Today, Maroulas is coming back to life. It has over 200 residents, there are children playing in the streets once again, and many of the old buildings have been restored by Greeks and by foreigners who have moved to live permanently in the village.

The village attracts many painters and photographers who find many themes here with the narrow alleys, old doors, door knobs and stone mosaics.

We lingered a little longer and sheltered in the shade in Milópetra, a café overlooking the village, sipping a frappe and a double espresso. As the early afternoon temperature soared to 42, there was no sea breeze to cool the summer air. We called a taxi, and on the way back down the winding twisting road to the coastline we were pointed to an olive tree that is said to be over 200 years old.

Our visit to Maroulas had truly been a journey in time, and we were soon back at Platanes and the coast. 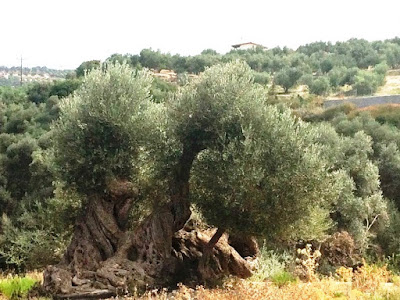 An olive tree said to be over 200 years old in the olive groves below Maroulas (Photograph: Patrick Comerford, 2016)

Canon Patrick Comerford lectures in the Church of Ireland Theological Institute. This featurews first published in September 2016 in the ‘Church Review’ (Dublin and Glendalough) and the ‘Diocesan Magazine’ (Cashel, Ferns and Ossory).