From Clontarf to Tara: a photograph
of a sculpted head of Brian Boru 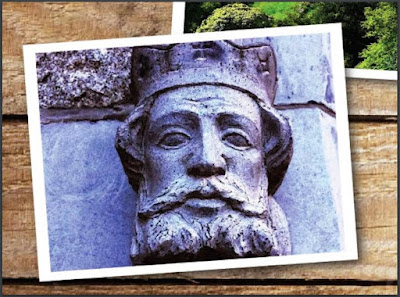 My photograph of a sculpted head of Brian Boru features in a new book on Tara, which is published this month by the Discovery Programme.

Tara, The Guidebook by Mairéad Carew is a richly illustrated guidebook on Tara, full of interesting facts, observations and insights about one of the most important archaeological sites in Ireland.

Mairéad Carew is a cultural historian and archaeologist, and the author of Tara and the Ark of the Covenant (The Discovery Programme/Royal Irish Academy, 2013). She was an Irish Research Council / Government of Ireland Scholar in the School of History and Archives in University College Dublin from 2005 to 2008. She is also a creative writer and was winner of the Listowel Writers’ Week Award and was shortlisted for a Hennessy Award.

Mairéad Carew’s new book asks questions such as who built Tara and why? Wat did Saint Patrick do at Tara? Who was Niall of the Nine Hostages? She writes about Daniel O’Connell’s ‘monster meeting’ at Tara in 1843, tells the story of the Tara Brooch, which was discovered in the sands at Bettystown, Co Meath, and not on the Hill of Tara, how Queen Victoria wore a copy of the Tara Brooch, and the story of the British-Israelites dug up the site of Tara in search of the Ark of the Covenant.

The Irish Nobel poet Seamus Heaney once wrote: ‘I mean the traces of Tara are in the grass, are in the earth – they aren’t spectacular like temple ruins would be in the Parthenon in Greece but they are about origin, they’re about beginning, they’re about the mythological, spiritual source – a source and a guarantee of something old in the country and something that gives the country its distinctive spirit.’

I took my photograph on page 88 in this new book at the Church of Saint John the Baptist in Clontarf on 7 March 2014. It was first published in April 2014 as one of the illustrations with a feature in the Church Review (Dublin and Glendalough) and the Diocesan Magazine (Cashel, Ferns and Ossory) to mark the 1000th anniversary of the Battle of Clontarf in 1014: ‘What is the legacy of Brian Boru and the Battle of Clontarf after 1,000 years?’ 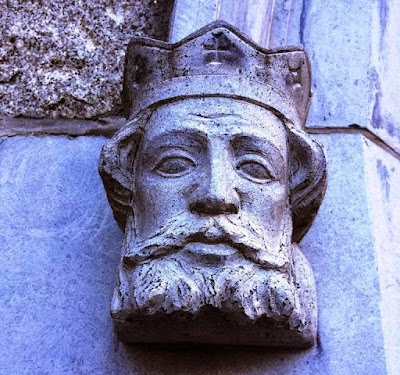 An image of Brian Boru? ... a carving of a king’s head at the main door of Saint John the Baptist Church of Ireland parish church in Clontarf (Photograph: Patrick Comerford, 2014)

Posted by Patrick Comerford at 20:44

See how they come these ghosts of yore,
Their ships are lapping at the shore;
Their long cloaks streel the evening dew,
The men who fought with Brian Boru.
They come to claim this resting place —
I see their likes in every face —
Their lot was cast by Liffey’s shore
Where Murchadh fell with thousands more.

Chorus
The Shannon waters heard their last goodbyes —
Here waved their women with those plaintive sighs —
They went to battle with the Viking foe;
For their king they lost, their keen of woe!

The twilight mists that fall so swift
The bat-wing hush that from them lifts
Above the water’s violet hue —
I see them move, this ancient crew.

To the Holy Island floating there
A silhouette upon the air:
The unroofed tower where anchorite
Raised prayer and praise, both day and night.

Chorus
Where Holy Island floats on the dark lake
Mountshannon lights reach out — for pity sake —
Like candle flicker on the water’s face
To guide these pilgrims to their resting place.

See how they come these ghosts of yore,
Their longships lapping at the shore;
Their cloaks that streel the evening dew,
The men who fought with Brian Boru,

They come to claim this resting place —
I see their likes in every face —
Their lot was cast by Cluain-Tarbh’s shore,
Their rest is here — they’re home once more.
— © Frank Callery.