How do I understand ‘reverently
consumed’ and ‘thoroughly cleansed’? 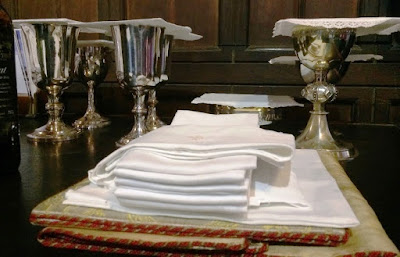 I was writing earlier today [8 September 2016] about the Irish-born priest, Father Richard Enraght, and the Bordesley Wafer Case, in which a consecrated wafer was stolen at the Eucharist by one of his churchwardens, John Perkins, and used in his zealous prosecution by the Church Association.

The stolen host was produced in court at his trial as evidence, marked with pen and ink and filed as an exhibit. Eventually, through the efforts of the English Church Union, the Consecrated Wafer was obtained from the court and given over to the care of the Archbishop of Canterbury, who reverently consumed it in his private chapel at Addington on 12 December 1879.

In a comment, my friend the Redemptorist theologian Brendan McConvery, editor of Reality, was particularly struck by this detail. But, of course, the outrage caused by the churchwarden and the subsequent action of the Archbishop of Canterbury were based not solely on Anglo-Catholic practices but on the traditional Anglican attitude to disposing of the consecrated elements after the Eucharist or Holy Communion.

I was shocked some years ago, after a very large service, to see the left-over consecrated wine being poured into the ground in the churchyard outside. Some colleagues report that it is becoming more-and-more a frequent occurrence to see the consecrated wine left over being poured down the sink. Some suggest that this practice is a statement by evangelicals that they do not believe in the real presence.

Other priests pour it back into the bottle. They may think they are being thrifty but it is unhygienic: the germs that have left in the chalice can now grow and thrive in the alcohol in the bottle for the next week or more.

Anglicans have a number of divergent and sometimes overlapping views about the presence of Christ’s body and blood in the bread and wine of the Eucharist. But whatever an individual’s theological views may be, the consecration sets apart the elements of bread and wine from common and profane use and so calls for reverent care of the sacrament.

As early as the third century, Tertullian said: ‘We feel pained should any wine or bread, even though our own, be cast upon the ground’ (De corona 3).

Successive liturgies of the Church of England has insisted that the consecrated elements left over be reverently consumed.

The first Book of Common Prayer in 1549 provides no instructions on what to do with any remaining sacramental elements. Until then, clergy who had used the Latin Mass, were used to consuming the elements, washing the sacred vessels with water, and reverently consuming the water used to rinse them.

Again, no explicit instructions are given in the 1552 Book of Common Prayer, although there is some ambiguity when it says:

And to take awaye the superstition, whiche any person hath, or myghte have in the breade and wyne, it shall suffice that the breade be suche as is usual to be eaten at the table, with other meates, but the beste and purest wheate breade, that conveniently may be gotten. And yf anye of the breade or wyne remaine, the Curate shall have it to hys owne use.

The provision for the curate having the bread and wine ‘to his own use’ referred to the elements that had not been consecrated, as the rubric in the 1662 Book of Common Prayer makes clear:

And if any of the Bread and Wine remain unconsecrated, the Curate shall have it to his own use: but if any remain of that which was consecrated, it shall not be carried out of the Church, but the Priest, and such other of the Communicants as he shall then call unto him, shall, immediately after the Blessing, reverently eat and drink the same.

It could be argued that in the 1662 rite, the Eucharistic action continues after the communion of the people, and that the Prayer of Oblation is originally part of the Prayer of Consecration, so any ablutions before the blessing would be premature.

The Non-Jurors made provision for some of the sacramental elements to be reserved for the sick and the housebound, but also insisted on reverent consumption of the remaining elements. Their Prayer Book in 1718 makes this explicit:

If there be any persons who through sickness or any other urgent cause are under a Necessity of communicating at their houses, then the Priest shall reserve at the open Communion so much of the Sacrament of the Body and Blood, as shall serve those who are to receive at home. And if after that, or if, when none are to communicate at their houses, any of the consecrated Elements remain, then it shall not be carried out of the Church; but the Priest, and such other of the Communicants as he shall then call unto him, shall immediately after the Blessing reverently eat and drink the same.

In 1980, the Alternative Service Book of the Church of England similarly said:

Any consecrated bread and wine which is not required for purposes of communion is consumed at the end of the distribution or after the service.

Any consecrated bread and wine which is not required for purposes of communion is consumed at the end of the distribution or after the service. 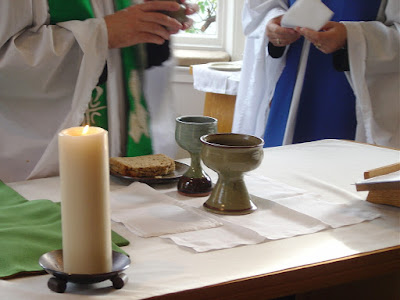 In the Church of Ireland, the present edition of The Bok of Common Prayer (2004), includes ‘General Directions for Public Worship’ (pp 75-77), which include the following directions:

(e) The bread to be used shall be the best and purest bread that can be obtained. Care is to be taken that the wine is fit for use.

Any of the consecrated bread and wine remaining after the administration of the communion is to be reverently consumed.

(f) After the communion the vessels shall be carefully and thoroughly cleansed with water.

Direction (e), in my opinion, does not favour the use of sliced pan but does allow wafers. Indeed, I enjoy shopping for ‘the best and purest bread that can be obtained.’ Nor does the spirit of direction (e) allow for wine to be poured back into a bottle in the vestry afterwards.

It is interesting to note, though, that the directions do not say how soon after the administration the remaining elements much be ‘reverently consumed’ or where the sacred vessels should be ‘thoroughly cleansed with water.’

There are different views on what ‘reverently’ means, so that some regard it as appropriate to give bread to the birds and to pour wine into the ground, ‘returning the elements to nature.’ But the word ‘consumed’ does not allow this interpretation, and any appeal to the course of nature is also unconvincing. All God’s good gifts of food and drink are subject to the same physical process. But that is no excuse for treating the consecrated sacrament as refuse or waste material. And certainly this is not the understanding of the word ‘consumed’ in plain English.

As Canon John Goodchild argued in a letter to the Church Times, ‘If your friend serves you a meal as a sign of love and you throw it down the toilet because that is where it would end up eventually, she may not be best-pleased. It may sometimes be hard to consume what remains respectfully, but if there is a lot remaining, others can be invited to take some.’

Others see the consumption of what remains as the most appropriate form of reverence. But I have heard people claim that the public consumption of the remaining elements is indiscreet or offensive. They say, for example, that the washing-up does not usually take place at a dinner table in front of the guests.

Canon Law in the Church of England today says no portion of the bread and wine consecrated at the Eucharist shall be carried out of the church in accordance with the provisions of Canon B 37 (2) except at the express wish of an individual sick communicant. In such cases, this shall be done either during or immediately after the service, or as soon as practicable on the same day.

What is known as ‘tarp-ing’ or ‘taking the ablutions in the right place’ – immediately after the Communion – was encouraged by Anglo-Catholics. This had been the Roman Catholic practice since the 16th century, but it also shortened the length of time during which the celebrant kept thumb and forefinger joined for fear of dropping consecrated particles.

‘Taking the ablutions in the right place’ is also a public witness to belief in the real presence, however that may be understood. From a practical point of view, it allows me time to greet people on their way out of the church or the cathedral. 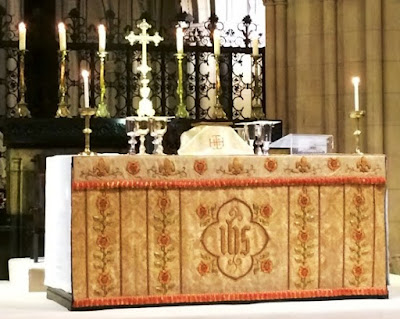 The sacred vessels on the altar at Christ Church Cathedral, Dublin (Patrick Comerford)