Picking blackberries in the lane in
the days remaining before Michaelmas 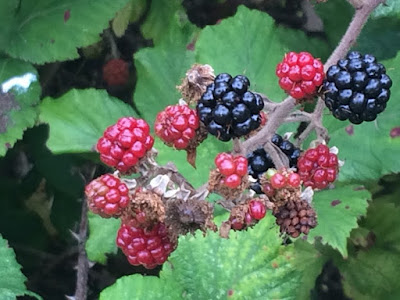 Blackberries in the lanes in Kilcoole, Co Wicklow, this afternoon (Photograph: Patrick Comerford, 2016)

Over breakfast this morning, some of us were talking about Michaelhouse in Cambridge and its interesting witness as a church and a café in the heart of the university city. It was a reminder that Michaelmas is soon upon us.

I spent most of the morning working at an academic committee meeting in Trinity College Dublin in the heart of the city. The new academic term which begins on Monday next was known until recently as Michaelmas term, and later next week, I am preaching at the early morning Eucharist on the Feast of Saint Michael and All Angels [29 September 2016].

On the way back, walking from the Luas tram station at Windy Arbour to the Church of Ireland Theological Institute, I stopped to admire the blackberries in the hedges and the ditches at the end of Orwell Road, on the edges of Milltown Golf Club.

When I was a child in West Waterford, we were told that Michaelmas Day is the last day blackberries should be picked. As I grew up, I realised that this is a superstition shared across the islands, from Achill to Lichfield, from Wexford to Essex and Cambridge.

Blackberries at the end of Orwell Road, Rathgar, this afternoon (Photograph: Patrick Comerford, 2016)

In his poem ‘Trebetherick,’ the late John Betjeman seems to link ripening blackberries and the closing in of the autumn days with old age and the approach of death:

But the former poet laureate had a more benign view of blackberries on a visit to the Isle of Man, when he described ‘wandering down your late-September lanes when dew-hung cobwebs glisten in the gorse and blackberries shine, waiting to be picked.’ 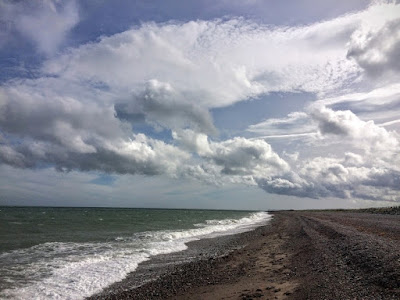 On the beach in Kilcoole, Co Wicklow, this afternoon (Photograph: Patrick Comerford, 2016)

Two of us decided to go blackberry-picking in the ‘late-September lanes’ of Kilcoole this afternoon. It was a warm autumn afternoon, and despite a large number of commuter cars parked at the railway station, there were only two other people on the beach, and the lane was almost deserted, apart from a mother passing on the traditions of blackberry picking to her young daughter after school, and a woman collecting wild apples that had fallen on the lane in the gentle autumn breezes.

Even when you are picking blackberries in twos or threes, this can be a solitary exercise, following the trails your eyes lead you along, finding your own comfortable areas for standing on your toes and stretching your arms high or stooping low.

It is a time to allow the mind to wander back to childhood memories, and time for contemplation and unstructured prayers, giving thanks for the beauty of creation. September is the beginning of the Church Year in the Orthodox tradition, so this was an afternoon to think about and to give thanks for beginnings and ends, for starting and ending, for openings and closings, for memories and even for forgetfulness. 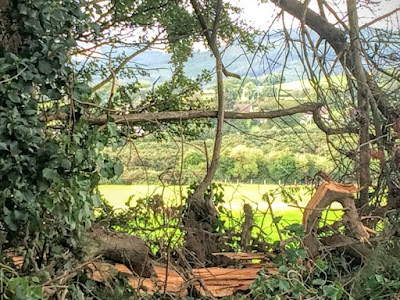 In the countryside of Co Wicklow between Kilcoole and Bray this afternoon (Photograph: Patrick Comerford, 2016)

We filled a bowl and half-filled a bag, and then had a short walk on the beach in Kilcoole before making our way through the autumn countryside of Co Wicklow to Bray.

There we had a late lunch in Carpe Diem, and yet another walk on the beach in Bray, where the only company was a man and his two dogs. And I thought of how Sylvia Plath linked blackberry-picking and the sea in her poem ‘Blackberrying’:

Nobody in the lane, and nothing, nothing but blackberries,
Blackberries on either side, though on the right mainly,
A blackberry alley, going down in hooks, and a sea
Somewhere at the end of it, heaving. Blackberries
Big as the ball of my thumb, and dumb as eyes
Ebon in the hedges, fat
With blue-red juices. These they squander on my fingers.
…
The only thing to come now is the sea.
From between two hills a sudden wind funnels at me,
Slapping its phantom laundry in my face.
These hills are too green and sweet to have tasted salt.
… 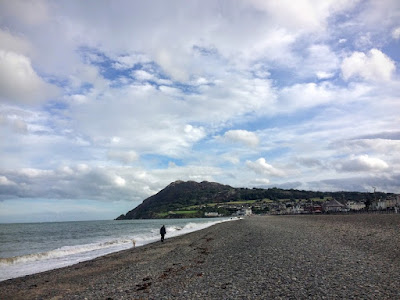 ‘The only thing to come now is the sea’ … a late afternoon walk on the beach in Bray, Co Wicklow (Photograph: Patrick Comerford, 2016)

Posted by Patrick Comerford at 18:58