Memories of three pioneering Dublin
hospitals and their traditions in Tallaght 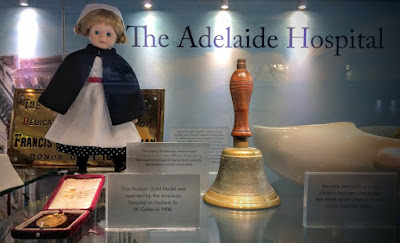 Memories of the Adelaide Hospital and its traditions in an exhibition in Tallaght Hospital (Photograph: Patrick Comerford, 2016)

I was back in Tallaght Hospital today [20 October 2016] for another series of tests on my lungs on the recommendation of my GP, who was concerned about a recent flare-up in the symptoms of my sarcoidosis.

Tallaght Hospital opened on 21 June 1998 when 115 patients were transferred to Tallaght from three inner city hospitals in Dublin, the Adelaide, the Meath and National Children’s Hospitals in Dublin’s city centre. The move happened after months of planning and detailed logistics. It was a carefully-planned and extremely smooth-running operation, and from 23 June 1998, new patients were admitted to the Hospital and clinical activity built up steadily.

The hospital was established 20 years ago when a charter was agreed in Dail Eireann on 1 August 1996. Today, Tallaght is one of Ireland’s largest acute teaching hospitals, and is funded by the Health Service Executive. It cares for children, adults and older people, has 562 beds, 12 theatres, and 14 critical care beds.

Tallaght Hospital stands on a 35-acre site and provides child-health, adult, psychiatric and age-related healthcare on one site. The hospital treats over 410,000 patients per year and employs almost 3,000 staff. The Hospital provides access for patients to over 20 medical and surgical specialties, with comprehensive on-site laboratory and radiology support services. It is also a national urology centre, the second largest provider of dialysis services in Ireland and a regional orthopaedic trauma centre.

Moving the hospital to Tallaght was a unique challenge to bring together three hospitals with very different traditions: the Adelaide Hospital, the Meath Hospital and the National Children’s Hospital (Harcourt Street). Throughout the ground floor at Tallaght, there are exhibits and memorabilia recalling the the traditions of these three hospitals that share over 600 years of medical and nursing care and education. 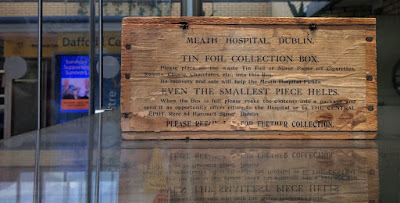 The Meath Hospital, founded in 1753, was the oldest voluntary hospital and university teaching hospital in Ireland (Photograph: Patrick Comerford, 2016)

The Meath Hospital is the oldest of the three hospitals. It was founded in 1753, making it the oldest voluntary hospital and the oldest university teaching hospital in Ireland. At its founding, the hospital was located in the ‘Liberty’ of the Earl of Meath, and it was opened to serve the sick and poor in the crowded Liberties in Dublin. 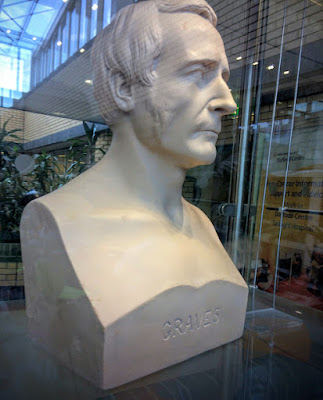 In the 19th century, the Meath Hospital achieved an international reputation because of its revolutionary teaching methods and ground-breaking research out by Dr Robert James Graves (1796–1853) and Dr William Stokes (1804-1878), physicians of note at the hospital.

Graves was the son of the Very Revd Richard Graves, the Dean of Ardagh. He was a President of the Royal College of Physicians of Ireland, a Fellow of the Royal Society of London and the co-founder of the Dublin Journal of Medical Science. He had an exceptional talent for languages and is also said to have invented the second-hand on watches. During a typhus epidemic in Dublin, Graves introduced the concept of giving food during the illness. He asked that the inscription on his tombstone should read: ‘He fed fevers.’ 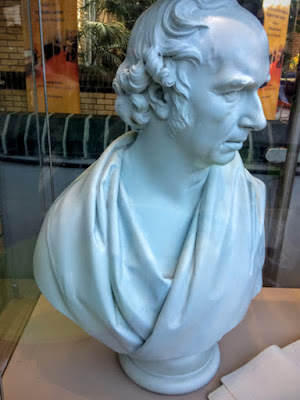 Willam Stokes, a student of Graves who became his collaborator, was a pioneering cardiologist who wrote the first published account in English of the use of the stethoscope. 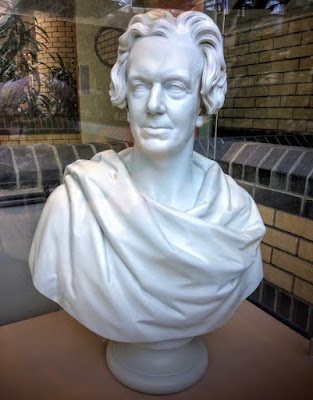 Sir Philip Crampton (1777–1858) was first appointed surgeon to the hospital in 1798, although he was not fully qualified. He was instrumental in establishing the system of bedside teaching of medicine, for which Dublin became famous in the 19th century.

More recently, the hospital developed specialised services in the fields of urology, psychiatry, orthopaedics, haematology, endocrinology and nephrology. The hospital was incorporated in 1998 into Tallaght Hospital and moved to Tallaght, although the original building continues to serve as a respite home.

The National Children’s Hospital was founded in 1821 by eminent Dublin doctors who were concerned with the lack of treatment available for sick children in the city. It was the first hospital devoted exclusively to the care and treatment of sick children in Ireland and Britain. Indeed, one of the hospitals’ early students, Dr Charles West, returned to London and founded Great Ormond Street Hospital in 1852. 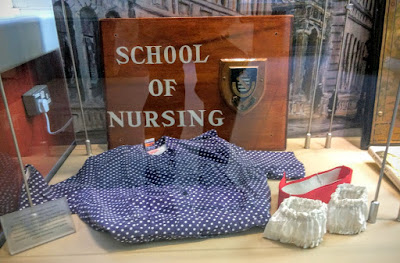 The Adelaide was famous for its nursing school (Photograph: Patrick Comerford, 2016)

The Adelaide Hospital was founded in 1839 by Dr Albert Jasper Walsh (1815–1880) when he was just 26 years old. It was named after Queen Adelaide, the wife of King William IV, and was founded primarily to serve the disadvantaged Protestant population of inner-city Dublin. Like the Meath Hospital and the National Children’s Hospital, the Adelaide Hospital was run on a voluntary basis, and its survival dependent on the generosity of others and the dedication of its staff.

The Adelaide was famous for its nursing school, which was founded in 1859 by Miss Bramwell. She had worked with Florence Nightingale in the Crimean War. The Adelaide has been at the forefront of many medical advances. It was, for example, the first general hospital in Dublin to introduce a skin clinic, in 1868, a gynaecological unit, in 1868, and the bacteriological control of milk, in 1904.

The well-known John T Kirby and Maurice Colles were honorary surgeons. The first premises was at 43 Bride Street and it continued there until 1846. It then closed for a time and after refunding re-opened in Peter Street in 1858, close to two existing schools of medicine. One of these, the Ledwich School, was incorporated into the hospital in 1894.

Among the notable physicians who have been associated with the Adelaide Hospital, Dr James Little (1837–1916) was President of the Royal College of Physicians of Ireland (1886-1888) and Regius Professor of Physic in Trinity College Dublin (1898-1916). He was physician to the hospital for 46 years until shortly before his death. Sir Henry Swanzy (1843–1913) was a distinguished eye specialist and ophthalmic surgeon to the hospital.

Dr Richard Dancer Purefoy (1847–1919), President of the Royal College of Surgeons in Ireland and one of the leading obstetricians and gynaecologists in Ireland, was Obstetrical Surgeon in the hospital for 21 years. Dr Ella Webb (1877–1946), who appointed anaesthetist in 1918, was the first female member of the staff, and she immediately established a dispensary for sick children in the hospital. She became an MD in 1925 and then worked with Dr Kathleen Lynn in Saint Ultan’s Hospital which was founded by Dr Lynn, a key figure in the 1916 Rising. Later, Dr William Alexander Gillespie (1912–2003) started his career as house officer in the hospital and returned as a consultant in 1977. He had an international reputation in the field of hospital infections.

The Adelaide Hospital was a general teaching hospital for many years and to the forefront in medical advances. Its charter, which dates from 1920, was one of the last royal charters granted in Ireland. When the Irish Hospitals’ Sweepstake was set up in 1930 to finance hospitals, the Adelaide was the only hospital at the time not to accept money from the Hospitals’ Trust because the governors disapproved of gambling and sweepstakes.

The Adelaide Hospital remained a general and teaching hospital until it became part of the new Tallaght Hospital in 1998. The former hospital building in Peter Street has since been converted into apartments. 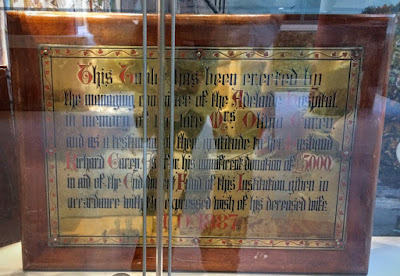 The long and proud histories of the Adelaide, the Meath and the NCH in providing specialist services to patients in Dublin continue today in Tallaght Hospital. It is one of two main teaching hospitals of Trinity College Dublin, specialising in the training and professional development of staff in areas such as nursing, health and social care professionals, emergency medicine and surgery, among many others. The Trinity Health Ireland (THI) collaborative agreement underpins Tallaght Hospital’s valued relationships with Trinity College Dublin (TCD), Saint James’s Hospital, and the Coombe Women and Infants University Hospital.

I left Tallaght Hospital with thankful memories of these three pioneering hospitals and their traditions, and confident that while I have sarcoidosis, sarcoidosis will never have me.

Posted by Patrick Comerford at 21:35

I hope you had a good outcome. I was very interested in your “post from Tallaght” and an addendum the following related: In writing his history of the Drumcondra hospital, Dr. E, McDowel Cosgrave M.D. tells us that shortly after 1820 Dr. John Barrett, Senior fellow of T.C.D., better know as Jackie Barrett, Provost of Trinity College, bequeathed £800 to the new hospital, £600 of which was expended in the purchase of the freehold of the site. In 1842, fever being less prevalent in the metropolis, people with general medical conditions were admitted. The parochial links with the parish of St. George were still strong and local clergy took a leading part in the committee work, the meetings were held in the old vestry room of the parish church. Charity sermons, usually preached in St. Georges were an important source of income until the Dublin Hospital Fund was established.

John Jebb, Bishop of Limerick has an unusual link with the Drumcondra hospital. He was the first to hold the curacy of Magorban parish (1810-1814) — which was effectively created for him by his friend, the then Bishop of Cashel, Charles Broderick — where he officiated at Beechmount, a private house, the seat of John Godfrey, Esq.5 It is coincidental that the parish church of Morgaban was where the Armitage family would later worship and in whose graveyard many of those who founded NCBI are buried. He was a good charity sermon preacher and preached at St. Peters in Dublin for the benefit of the Magdalen Asylum (1814) and for the Female Orphan House (March, 1818). On the publication of this latter sermon, which was presented to the Lord Lieutenant (Marquess Wellesley) as President of that Charity, John Jebb was immediately appointed one of his chaplains and his path to further preferment was secured. Although he had given up charity-sermon preaching, he was induced by his brother, in the spring of 1819, to preach the charity sermon for the Whitworth Fever Hospital from the pulpit of St. George’s Church, Temple Street. On his arrival in Dublin he was taken ill and the sermon ‘which he had prepared for the occasion, was read by another clergyman’.note. The Whitworth Fever Hospital would later become the head office of NCBI.

The hospital was generally in debt and there are records of stock being sold to meet expenses, and for many years it had periods of closure. That this was common to other hospitals at the time is indicated by a letter of November 1848 from the committee of the Adelaide Hospital asking whether both institutions could not be amalgamated. Dr. Humphrey Minchin and Surgeon Seymore were deputed to find out whether “if the two institutions were amalgamated, patients of all denominations might not be received”. No further mention of this project appears in the minutes of the Whitworth hospital but in May 1856 it was reported that £1,300 was standing to the credit of the trustees of the late Adelaide Hospital and application was made to have it transferred to the Whitworth Hospital.

The threatened outbreak of cholera in 1848 forestalled the closure of the hospital. On September 11th the committee received a letter from the secretary of the Lord Lieutenant asking whether they could, if required, take in cholera patients. This was accepted (Dr. Tweedy dissenting). In the following year the Board of Guardians of the North Dublin Union was in negotiations for the hospital but these broke off and the guardians erected Cholera Sheds further up on the Whitworth Road, in the vicinity of the present tennis club. These sheds could accommodate 594 patients, 264 males and 330 females. They opened on May 31st 1847 and closed on July 1st 1848 having treated 3,047 male and 3,074 female patients of whom 474 died. On October 9th 1847 there were 644 patients in the sheds. As a consequence, the Drumcondra hospital was empty during 1849 and 1850 — the Matron only being retained.