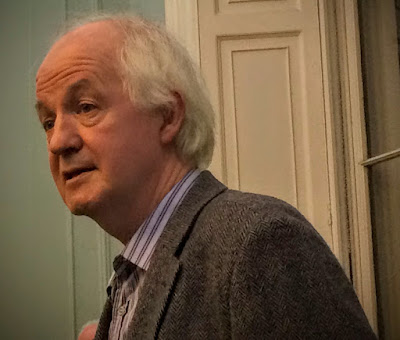 Maurice Earls speaking at the launch of ‘Space to Think, marking the tenth anniversary of the ‘Dublin Review of Books’ (Photograph: Patrikck Comerford, 2016)

I was an early contributor to the Dublin Review of Books when I wrote a review in Issue Number 8 (Winter 2008-2009) a book by the Cork-born biblical scholar, the late Jerome Murphy-O’Connor: St Paul’s Ephesus: Texts and Archaeology (Liturgical Press/Michael Glazier).

Strolling down the paved Priests’ Way, or Curetes Street, in Ephesus at the height of the summer, our guide happily pointed out the vista ahead of us, including – in his own words – the ‘Library of Celsius’. Well it was a scorching hot day – and given the decadent reputation of Ephesus at the height of its prosperity I have no doubt the library shelves once held some hot topics.

Like many of the early reviewers, I was one of Enda O’Doherty’s former colleagues at The Irish Times, and it was inevitable that the attendance at this launch [13 October 2016] should include so many old friends who have also contributed to this collection of reviews. Since then, I have enhjoyed dipping in and out of this collection.

The shared focus on Irish and European culture is richly reflected in the selection of essays in Space to Think, which range from pieces on the life of Seamus Heaney, the foibles of Jonathan Swift to the letters of Samuel Beckett; a study of the Ulysses obscenity trials in the US; the contradictions in George Orwell’s politics; Lara Marlowe on Sartre and de Beauvoir’s existentialist theories and their tawdry lifestyles; Clive James’s marvellous feats of translation; the American crime novel; and the greatest famine the world has ever known, which occurred after Mao’s so-called ‘Great Leap Forward’ in the 1950s.

Other subjects include: Kevin Barry’s Beatlebone, courtship in Jane Austen’s England, Irish prisoners of war in World War II, and the Ryanair experience.

Almost all of the pieces in the anthology were originally published as book reviews or ‘review-essays.’

The Dublin Review of Books was started in order to publish informed and imaginative essays and commentary on Irish and international subjects. Maurice Earls recalled that the Dublin Review of Books was launched online in 2007 because of the digital possibilities offered by virtually free worldwide distribution. The digital edition liberated the publishers from print bills ‘which would surely have sunk us, since we don't have advertising and we don’t charge.’ He pointed out that in the digital age there is little point in publishing a book unless one goes to the trouble of making it a beautiful object.

Enda O’Doherty said that the review essay format can run from 2,500 to 4,500 words. He quoted the British literary critic Frank Kermode, who said that it is ‘a very satisfactory genre,’ occupying a comfortable middle ground between the brief notice of a newspaper review and the lengthy detail of an academic paper or lecture.

To date, the DRB has published over 1,000 essays, from 360 contributors. Many people are willing to write on a pro bono basis, and only those who make a living from writing are paid for their contributions. The DBR is still going after 10 years, and continues to be entirely free to the reader.Space to Think is a lavish production, and is available in bookshops for €25. 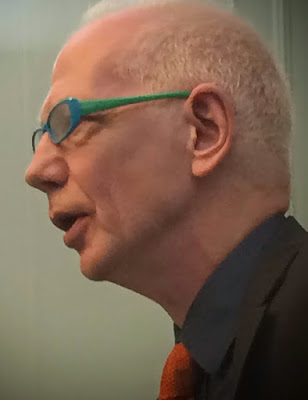 Enda O’Doherty speaking at the launch of Space to Think, marking the tenth anniversary of the ‘Dublin Review of Books’ (Photograph: Patrikck Comerford, 2016)

Posted by Patrick Comerford at 20:43