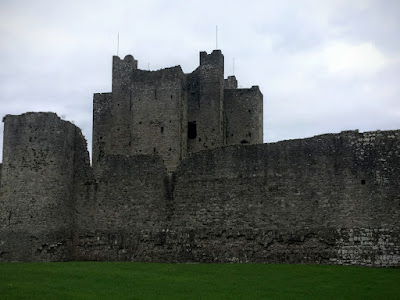 Trim Castle is the largest, best-preserved and most impressive Anglo-Norman castle in Ireland (Photograph: Patrick Comerford, 2016)

Trim Castle on the banks of the River Boyne in Co Meath looks for all the world like the ideal castle for a mediaeval block-buster, peopled with valiant warriors and cloistered monks. And it has been. Mel Gibson and the makers of Braveheart chose Trim Castle as their location.

But history is always more impressive than fiction – or movies – and I walked around Trim Castle, towering above the banks of the River Boyne, early one afternoon this weekend when I stopped there on my way to visit friends who live near the neighbouring Navan.

Trim Castle is the largest, the best-preserved and the most impressive Anglo-Norman castle in Ireland. In the Middle Ages, this was a strong symbol in stone of Anglo-Norman strength and power at the edges of the Pale. 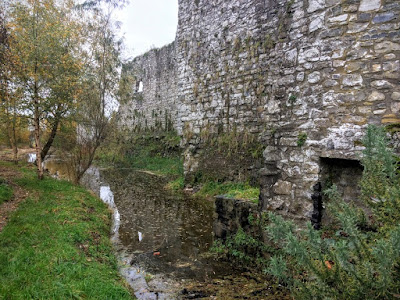 The surviving moat at Trim Castle, built at an important crossing point on the River Boyne(Photograph: Patrick Comerford, 2016)

In Irish, Trim was known as áth Truim or ‘The Ford of the Elder Trees,’ indicating how this was once an important crossing point on the River Boyne, with a local chieftain’s fort and an early monastery on the site.

Shortly after the arrival of the Anglo-Normans in Ireland, King Henry II granted the Kingdom of Meath to Hugh de Lacy, along with custody of Dublin in 1172 as he tried to curb the expansionist policies of Richard de Clare, best remembered in Irish history as Strongbow.

For strategic reasons, Hugh de Lacy decided to make Trim, rather than Drogheda, the centre of his newly acquired lordship. He converted a ringfort into a wooden castle with a spiked stockade, but this structure was seen as a threat to the Gaelic Irish and in 1174 Rory O Connor, King of Connacht and last High King of Ireland, attacked and destroyed the castle.

The following year, work began on a more permanent stone replacement and over the following decades Hugh de Lacy and his son Walter built the largest Anglo-Norman castle in Europe. 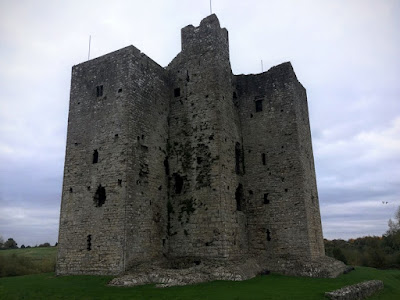 Initially a stone keep, or tower, replaced the wooden fortification. Work on building the massive three-storeyed keep, the central stronghold of the castle, began ca 1176 on the site of an earlier wooden fortress. This massive 20-sided tower, which is cruciform in shape, was protected by a ditch, curtain wall and moat.

The keep was remodelled and then surrounded by curtain walls and a moat. The wall, punctuated by several towers and a gatehouse, fortified an area of about three acres. Walter de Lacy’s castle was completed by about 1224.

The unique 20-sided cruciform design of the keep, with walls that are three metres thick, typifies the experimental military architecture of the day. This keep was both the domestic and administrative centre of the castle.

When Walter de Lacy died in 1241, Trim Castle was inherited by his grand-daughter Mathilda (‘Maud’). When Mathidla died in 1304, her second husband, Geoffrey de Geneville, Lord of Vaucouleurs in France, entered the Priory at Saint Mary’s in Trim. Trim then passed to their oldest daughter, Joan. In 1301, she married Roger Mortimer and the castle passed to the Mortimer family. 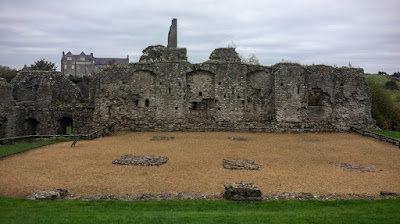 A new great hall was built at the turn of the 13th and 14th centuries (Photograph: Patrick Comerford, 2016)

The next phase of building and expansion of Trim Castle came at the turn of the 13th and 14th centuries, when a new great hall was built, with an under-croft and attached solar in a radically altered curtain tower. A new forebuilding and stables were also added to the keep.

During the late Middle Ages, Trim Castle was the centre of administration for Meath and marked the outer northern boundary of The Pale. King Richard II stayed there before being deposed in 1399. Richard II left behind two boys as wards: Prince Hal later became Henry V, while Humphrey of Gloucester later became known as the ‘Good Duke’; the guests were housed in the gate-tower at the drawbridge.

The Mortimer family continued to hold Trim Castle until 1425, when the descendants of Roger Mortimer died out.

The estate passed to the next heir in the female line, Richard of York, 3rd Duke of York and great-grandson of Edward III. He was killed at the Battle of Wakefield in 1460, and in 1461, Richard’s son, King Edward IV, appointed Germyn Lynch of London to be his representative at Trim. 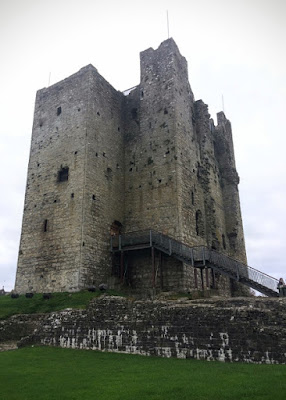 During the 15th century, the Irish Parliament met in Trim Castle seven times, notably in 1465 when it passed a law authorising the beheading of all robbers or those under suspicion of robbery.

By 1500, Trim Castle was in decline, but it remained an important outpost on the north-west edges of the Pale. Much of its fabric has remained unchanged since then. But in the 16th and 17th centuries, Trim Castle had declined in importance, except as a potentially important military site, and the castle soon began to deteriorate.

The castle was refortified during the Confederate and Cromwellian wars in the 1640s. After the Drogheda was sacked in 1649, the garrison of Trim fled to join other Irish forces and Trim was occupied by Cromwell’s army.

After the wars of the 1680s, the castle was granted to the Wellesley family who held it until Arthur Wellesley, the Duke of Wellington, who received his early schooling in Trim, sold it to the Leslie family.

From the Leslie family, Trim Castle passed through the Encumbered Estates Court into the hands of the Plunkett family of Dunsany Castle. They left the lands open and from time to time allowed various uses, with part of the Castle Field rented for some years by the Town Council as a town dump.

The Plunketts of Dunsany held Trim Castle and the surrounding until 1993. After years of discussion, Lord Dunsany sold the land and buildings to the State, retaining only river access and fishing rights.

The Office of Public Works began a major programme of exploratory works and conservation, costing over €6 million, including partial restoration of the moat and the installation of a protective roof. The castle re-opened to the public in 2000.

There was some local controversy in 2003 when the Minister for the Environment, Heritage and Local Government, Martin Cullen, decided not to oppose a five-storey hotel being built across the road from the castle despite the opposition of local councillors and heritage bodies. 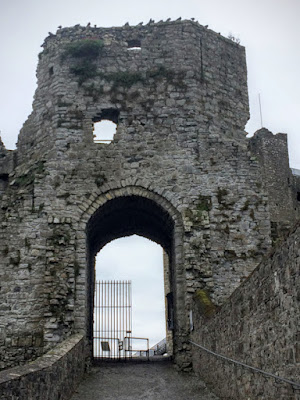 The surviving curtain walls of Trim Castle were built in three phases. The west and north sides of the enceinte are defended by rectangular towers, including the Trim Gate, dating from the 1170s. The Dublin gate was erected in the 1190s or in the early 13th century. The remaining wall to the south with its round towers dates to the first two decades of the 13th century.

The castle has two main gates. The gate in the west side dates to the 1170s and sits on top of a demolished wooden gateway. The upper stories of the stone tower were altered to a semi-octagonal shape, ca 1200. The Dublin Gate in the south wall is a single round towered gate with an external barbican tower. It dates from the 1190s or the early 13th century and is the first example of its type to be built in Ireland.

Apart from the keep, the main structures that survive to this day consist of:

1, An early 14th century three-towered fore work defending the keep entrance and including stables within it. This is accessed by a stone causeway crossing the partly filled-in ditch of the earlier ringwork.

2, A huge late 13th-century three aisled great hall, with an under croft beneath its east end opening via a water gate to the river.

3, A stout defensive tower, turned into a solar in the late 13th century at the north angle of the castle.

4, A smaller aisled hall, added to the east end of the great hall in the 14th or 15th century.

5, A building that may have been the mint and that was added to the east end of the smaller aisled hall.

7, Some 17th-century buildings, added to the end of the hall range and to the north side of the keep.

8, A series of lime kilns, one dating from the late 12th century, the remainder from the 18th and 19th centuries.

Trim Castle is open in November and December on Saturdays and Sundays from 9 a.m. to 4 p.m., with a small entrance charge. 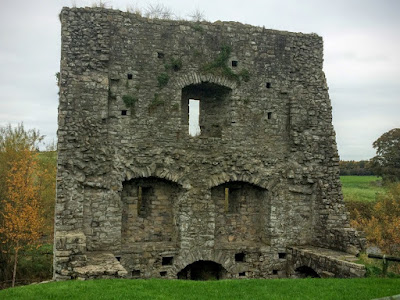 In November and December, Trim Castle is open on Saturdays and Sundays (Photograph: Patrick Comerford, 2016)