Taking part in the commissioning
of six new student readers 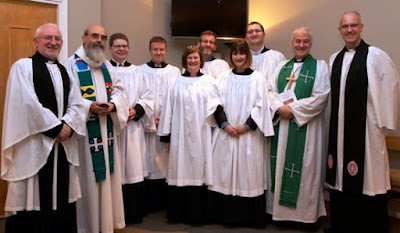 I am working throughout the weekend with part-time students on the MTh students, with lectures and seminars on the Liturgy module on Friday and Saturday, and a discussion of Patristic Spirituality in the Chapel of CITI later this morning [6 November 2016].

I was the deacon at the Community Eucharist in the Chapel on Wednesday evening [2 November 2016], reading the Epistle and assisting at the Holy Comunion, when six ordinands were commissioned as Student Readers by Archbishop Michael Jackson of Dublin.

The six students were presented for licensing by the Director of the institute, the Revd Canon Dr Maurice Elliott, and the Lecture in Missiology, the Revd Dr Patrick McGlinchey, who co-ordinates student placements.

In his sermon, Archbishop Jackson spoke about the ministry to which the students would be ordained. He said that the Gospel reading (Luke 14: 25–33) suggested that weighing up the possible outcomes of a life-choice was liberating.

‘The top and the bottom of these parables is the following: you and I must make up our minds about the most secure of securities as we know them: materialism. Giving up things that delight us is a requirement of discipleship, so it is bound to be a requirement of the ordained ministry that follows from discipleship. Few of us are ready; fewer of us are willing to live immaterial lives. It is a change of spiritual attitude to which we are invited today and its purpose is to lighten our load and to equip us to be more spiritually nimble and more spiritually alert in our personal discipleship and in our ministry for and with other people,’ he said.

The Archbishop went on to speak about the public suffering that is presented every time we switch on the television or surf the news on our mobile phones. He suggested there was now an ‘acceptable level of suffering.’

‘The great hole in our conscience is Aleppo and Damascus; it has been Gaza; it has been Mostar; it has been Kigali; it has been Auschwitz. In all of these situations and circumstances – because human beings suffer by the premeditation of other human beings – everyone is dehumanised and nobody does anything about it while it is happening. And still God restores. This is the glory of grace and the miracle of redemption.’

The full text of the Archbishop’s sermon is available on the Dublin and Glendalough diocesan website here.