‘The sweet and silly
Christmas things’ 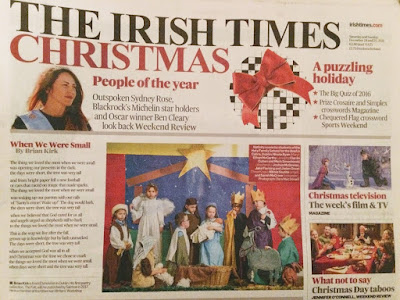 Searching for meaning
‘The sweet and silly
Christmas things’

Earlier this month, Philip Larkin joined the pantheon of poets when he was honoured with his own plaque in Poets’ Corner in Westminster Abbey. The ceremony was recognition for a poet who had refused all the trappings of establishment life, including a nomination as Poet Laureate.

While he was a student at Oxford in 1940, Larkin spent Christmas with his parents in Lichfield, the Midlands cathedral city they moved to during the Coventry Blitz. In those weeks, Larkin wrote three poems including Christmas 1940. These poems were never published in his lifetime and first came to public attention in 1992, almost seven years after his death. Larkin was a secularist who spurned all links with polite society and with the church. Yet he was nostalgic for the Church as an embodiment of tradition and community, and he was, as he said, “an agnostic, I suppose, but an Anglican agnostic, of course.”

In Christmas 1940, Larkin is a young man standing atop Borrowcrop Hill, looking down on the cathedral city on one side and on the open English countryside on the other, enthralled by the beauty of creation – “the night … full of stars”, “tree and farm”, “living stars flung from east to west”, “the windless gulf”. Despite his “Anglican atheism”, Larkin suggests in many of his poems, including Church Going and An Arundel Tomb, that he wants the Church to continue its rites and rituals, if only because they provide social cement as society faces disintegration.

As faith and belief lose their grip on society throughout northern Europe, those rites and rituals persist – to catch imaginations, to provide meaning and significance and to explain how we share values. And these truisms come to life most explicitly in this Season of Christmas.

We continue to bring trees from the countryside into urban homes, as though we retain memories of the need to care for and to preserve the beauty of creation when the harshness of mid-winter seems to threaten survival itself. We decorate our homes and frost the windows of shops with reminders of “living stars flung from east to west”, re-creating an awe for the splendour of the cosmos even when we forget how a star led the Wise Men to Bethlehem. We convince our children of the truth of Santa Claus, though we have long forgotten Saint Nicholas of Myra who combined his defence of Christian dogmas with the defence of children, and who gave generously to save children from abuse and trafficking.

The Christmas message is refashioned in each generation, told and retold in each age. But at the heart of this message is a story that challenges us when we become consumed with consumerism, and when we forget the truths that lie behind the first Christmas story. We retell the Christmas message every time we send Christmas cards to those we need to remember. The poet John Betjeman – the poet Philip Larkin was expected to succeed as Poet Laureate – recalled in Advent 1955:

… I remember
Last year I sent out 20 yards,
Laid end to end, of Christmas cards
To people that I scarcely know –
They’d sent a card to me, and so
I had to send one back.

Most of our Christmas cards still illustrate scenes of the first Christmas: the stable in Bethlehem, the angelic host, the shepherds tending their flock, the visiting Magi, the homeless family who became refugees in Egypt. How often we send cards without reflecting on the significance and relevance of these scenes. The yards of cards, laid end to end among our decorations, should remind us of the needs of a homeless family with a child at Christmas, the cruelty of capricious and despotic rulers and factions in the Middle East, and the plight of refugees in a region once known as the Holy Land.

A stable is not appropriate housing for a homeless couple when she is pregnant; but then neither is a doorway nor an occupied office block. The Christmas story continues to confront us with the inadequacies of our society and the paucity of our priorities. And it challenges us to ask why many European leaders, who claim they are defending a Christian Europe, have turned their backs on the plight of refugees in the very parts of the Mediterranean basin where Christianity was born.

Having questioned the meaning of a consumer-obsessed Christmas, John Betjeman turns to seek its true meaning:

Posted by Patrick Comerford at 08:00

Patrick - the is the best post ever. I will take it to heart and share it with as many people as possible.