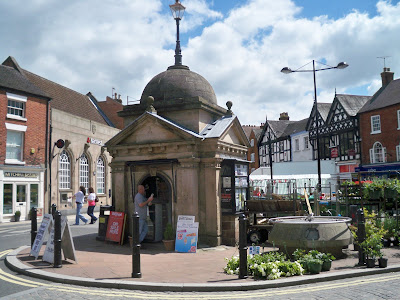 The Johnson Memorial in the Market Place in Uttoxeter (Photograph: Patrick Comerford)

In 1780, when he was in his 60s, Samuel Johnson did public penance in the Market Square in Uttoxter, standing in the rain for a number of hours, bareheaded and without a hat.

The story is recalled in one of the panels at the base of Johnson’s statue in the Market Square in Lichfield. The architectural historian Sir Niklaus Pevsner has compared these bas-relief panels on the plinth with the work of Donatello.

Why did Johnson do this public act of penance?

Once, as a boy, he had refused to go and look after the bookstall his father ran in Uttoxeter. Later, on his last return visit to Lichfield, he left his friends and family early one morning and went back to Uttoxeter. When he got back to Lichfield late in the day, he apologised for his absence and told his host:

Madam, I beg your pardon for the abruptness of my departure from your house this morning, but I was constrained to it by my conscience. Fifty years ago, Madam, on this day, I committed a breach of filial piety, which has ever since lain heavy on my mind, and has not till this day been expiated. My father, you recollect, was a bookseller, and had long been in the habit of attending Uttoxeter market, and opening a stall for the sale of his books during that day. Confined to his bed by indisposition, he requested me, this time fifty years ago, to visit the market, and attend the stall in his place. But Madam, my pride prevented me from doing my duty, and I gave my father a refusal. To do away with this sin of disobedience, I this day went in a postchaise to Uttoxeter, and going into the market at the time of high business, uncovered my head, and stood with it bare an hour before the stall which my father had formerly used, exposed to the sneers of the standers-by and the inclemency of the weather, a penance by which I trust I have propitiated heaven for this only instance, I believe of contumacy towards my father. 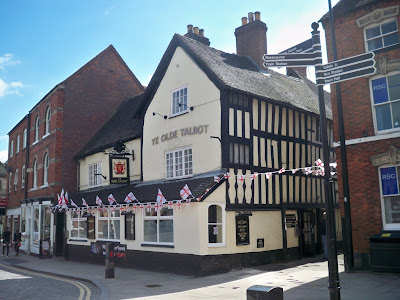 Ye Olde Talbot in Uttoxeter boasts that Johnson must have been a regular visitor (Photograph: Patrick Comerford)