Hymns to mark the feast of
the Conversion of Saint Paul 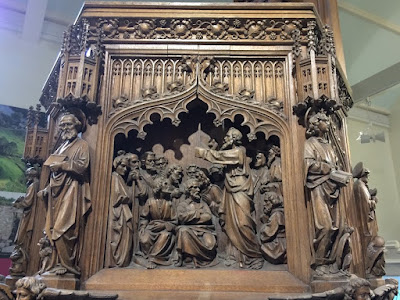 This is the Feast of the Conversion of Saint Paul [25 January 2017]. This evening in the chapel of the Church of Ireland Theological Institute, I am presiding at the Community Eucharist (Holy Communion 2, Prayer 1), and the Rector of Killiney, Ballybrack, the Revd Dr William Olhausen, is preaching.

These photographs and this introduction to the hymns are part of this evening’s service booklet:

Processional Hymn: ‘Ye watchers and ye holy ones’ (Church Hymnal, 476) was written by John Athelstan Laurie Riley, who gathered material for his hymns as he travelled throughout the East Mediterranean and the Middle East, as chair of the Anglican and Eastern Church Association. He was a member of the editorial board of the English Hymnal (1906). This hymn reflects his Patristic interests. The melody, Lasst uns erfreuen (Easter Song) was found in Geistliche Kirchengesäng (Cologne, 1623) and was arranged by Ralph Vaughan Williams (1872-1958) for this hymn in the English Hymnal.

Gloria: ‘Glory in the highest to the God of heaven’ (Church Hymnal, 693) was written in 1976 by the Revd Christopher Idle, who has written over 300 hymns. He is now retired and is an Honorary Assistant Minister at Holy Trinity, Bromley Common. This hymn is a reminder of the Communion of Saints gathered around the Lamb on the throne. The tune ‘Camberwell’ was written in 1960 by the Revd John Michael Brierley while he was an ordinand at Lichfield Theological College and to honour the Revd Geoffrey Beaumont, then Vicar of Camberwell and remembered for composing the Twentieth Century Folk Mass while he was the chaplain of Trinity College, Cambridge.

Gradual: ‘For all your saints in glory’ (Church Hymnal, 460) was written by Bishop Edward Darling, general editor of the Church Hymnal (5th edition). The editorial committee wanted a composite hymn for saints’ days, with a common opening and closing stanza, and a choice of an intervening stanza. The tune ‘The Star’ (An Réalt) is an Irish traditional melody, arranged by Professor George Hewson (1881-1972), organist of Saint Patrick’s Cathedral, Dublin.

Post Communion Hymn: ‘For all the saints, who from their labours rest’ (Church Hymnal, 459) was written by Bishop William Walsham How (1823-1897). Bishop How, known as ‘the poor man’s bishop,’ was the first Bishop of Wakefield, and died in Leenane, Co Mayo, in 1897. The original form had 11 verses, although three are omitted from most versions. The verses extolling ‘the glorious company of the Apostles,’ ‘the godly fellowship of the prophets’ and ‘the noble army of martyrs’ were inspired by the 1662 Book of Common Prayer version of Te Deum. The tune Sine Nomine (‘Without Name’) was written for this hymn by Vaughan Williams while editing the English Hymnal. 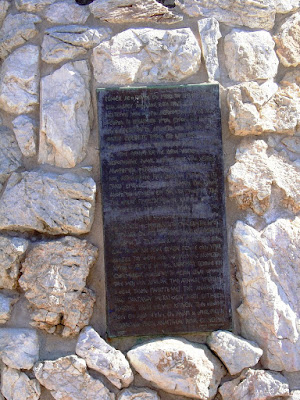 The Apostle Paul’s sermon inscribed on a plaque at the Areopagus in Athens (Photograph: Patrick Comerford)