My last sermon as a canon
of Christ Church Cathedral 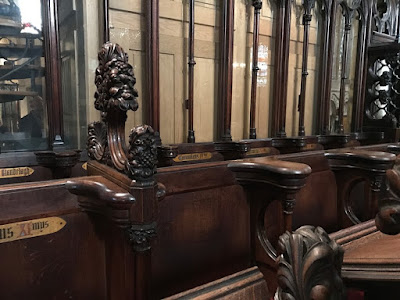 I am in Christ Church Cathedral, Dublin, this morning [15 January 2017], preaching at the Cathedral Eucharist.

This is the Second Sunday after Epiphany, and my last Sunday in the cathedral as preacher and canon-in-residence. Last Sunday [8 January 2017], I presided at the Cathedral Eucharist.

Later this week, I move to the Rathkeale and Kilnaughtin Group of Parishes in west Co Limerick and north Co Kerry, as priest-in-charge and to take up new responsibilities in the Diocese of Limerick and Killaloe.

It has been a privilege to be a canon of Christ Church Cathedral for almost ten years, serving on the chapter, the cathedral board, and various cathedral committees and working groups.

I have had particular pleasure in sitting my stall in the chapter, close to the choir and learning from so much about music from them.

This morning’s setting for the Cathedral Eucharist is the Messe pour Notre-Dame (2002), or Mass for Notre Dame by the English organist and composer David John Briggs. It was commissioned by Neil Shepherd and the Choir of Keynsham Parish Church, Bristol, and they performed it with Briggs in Notre-Dame Cathedral in Paris on 28 July 2002.

Later it was recorded in Gloucester Cathedral in 2009 by the choir of Trinity College, Cambridge, conducted by Stephen Layton and with the composer at the organ.

David John Briggs was heavily influenced by Jean Langlais and Pierre Cochereau, and is now regarded as one of the world’s finest improvisers. He was born in 1962, and was brought up in Birmigham, where his grandfather Lawrence Briggs was the Organist of Saint Jude’s Church on Hill Street for over 40 years.

Briggs is probably the only person outside France for whom, at the age of just nine, the death in Paris of Marcel Dupré in 1971 was a major event. That year, Briggs was also introduced to the work of Pierre Cochereau (1924-1984), who was the Organist Titulaire at Notre-Dame Cathedral in Paris from 1955 until his death.

At the time, Briggs was a chorister at Birmingham Cathedral, where John Pryer gave him an LP of the maître improvising a set of Variations on Alouette, gentille Alouette. He heard Cochereau three times at Notre-Dame in the early 1980s, and recalls ‘each occasion was a life-changing experience.’

Whilst he was at Cambridge, he toured Australia, New Zealand, Belgium, the Netherlands and Germany with the choir of King’s College. In 1983, he received the Countess of Munster Award to study Interpretation and Improvisation with Jean Langlais in Paris. There he started transcribing the recordings of Cochereau, a labour of love that took him 11 years.

Briggs’s subsequent performances and recordings of them earned him his initial acclaim. He was also the first British organist to win the Tournemire prize for improvisation at the St Albans International Organ Festival.

The Messe pour Notre-Dame is a fusion of Cochereau transcription and Briggs’s own compositional voice. It was commissioned by Neil Shepherd and the choir of Keynsham Parish Church, near Bristol, who performed it with Briggs in Notre-Dame on 28 July 2002.

Meanwhile, in May 2002, Briggs left Gloucester to pursue a freelance career as a concert organist and composer. In 2010, he made his debut at the BBC Proms as part of ‘Bach Day.’

In 2012, he became Artist in Residence at Saint James’s Anglican Cathedral in Toronto.

Today he is an internationally renowned organist, known for his brilliant organ transcriptions of music by composers such as Mahler, Schubert, Tchaikovsky, Elgar, Bruckner, Ravel, and Bach. He frequently performs improvisations to silent films such as Phantom of the Opera, Hunchback of Notre-Dame, Nosferatu, Jeanne d’Arc and Metropolis, as well as a variety of Charlie Chaplin films.

He also returns to teach at Cambridge, and gives masterclasses at colleges and conservatories across Europe and the US.

I have been a member of the chapter of Christ Church Cathedral since 2007. This is my last Sunday to preach there as a canon of the cathedral. But I look forward to this morning’s setting, and I am sure I shall back in this wonderful, beautiful cathedral on many occasions in the future. 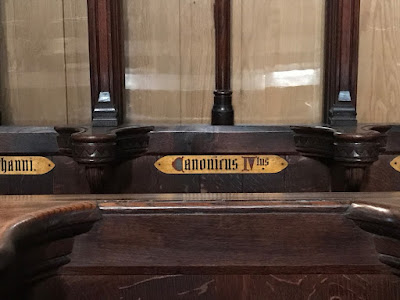 This is my last Sunday to sit in a canon’s stall in Christ Church Cathedral, Dublin (Photograph: Patrick Comerford, 2017)

I am sorry to hear this but trust you will do well and be very happy in your new position. I hope you continue to blog... I've enjoyed your words and thoughts very much. Good luck and God speed.