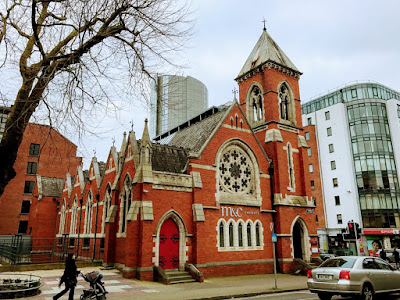 In my strolls between connecting buses in Limerick, I have come to admire the former Presbyterian Church on the corner of Henry Street and Lower Mallow Street in Limerick.

This is a very fine red brick and Portland stone church, displaying a wealth of stone carving and ornamentation. The church was designed by the architect George Coppinger Ashlin (1837-1921), who had married AWN Pugin’s daughter, Mary Pugin (1844-1933), in 1867.

At the time, Ashlin was in partnership with Thomas A Coleman (1865-1950). Ashlin and Coleman were the architectural heirs to the legacy and work of Pugin in Ireland. The majority of their work was in Leinster, and this church is one of their the few commissions in Co Limerick.

The only other church by Ashlin and Coleman that I have identified in Limerick is the much later Saint Mary’s new church, built in the 1930s near Saint Mary’s Cathedral (Church of Ireland) on the site of a church first built in 1749. Indeed, the church on Henry Street was the only commission Ashlin and Coleman received from the Presbyterian Church.

The Presbyterians in Limerick claim they can trace their origins in the city back to a small group of Calvinist Dissenters from Scotland who settled in Limerick around 1549. 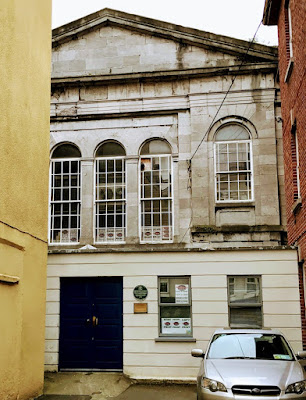 These early Scottish Dissenters later rented what had been old chapel of the Augustinian Nunnery in Pump Lane, outside the walls of the city and close to Saint Mary’s Cathedral. The first Augustinians in Limerick were nuns known as the Canonesses of Saint Augustine, and their house was founded in 1171 under the patronage of Donal O Brien. It was dedicated to Saint Peter and was known as Saint Peter’s Cell.

Their house was suppressed along with other monastic houses at the Reformation, and it eventually passed to the Damer family. It was used by the Presbyterians until the second half of the 18th century. However, no traces of the original Augustinian foundation survive, and the site of their house is now part of the grounds of Saint Mary’s Convent School.

Meanwhile, the heirs to these Scottish Dissenters built the Dissenters’ Meeting House in Pump Lane in 1765. As the congregation grew in size, their meeting house was replaced 200 years ago with a new church built in 1817 in Glentworth Street.

But the church in Glentworth Street also soon proved to be too small, and it was enlarged in 1829 and a gallery was added in 1846. Despite these additions, a new church was needed by the end of the 19th century, and a site was acquired on the corner of Henry Street and Lower Mallow Street. 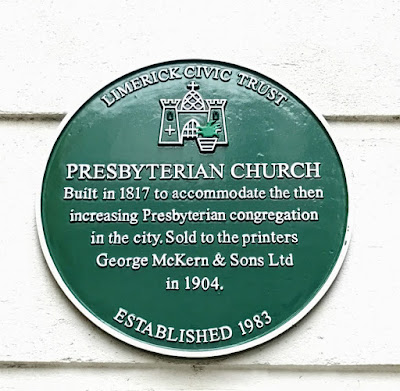 A plaque recalls the 200-year-old history of the church in Glentworth Street (Photograph: Patrick Comerford, 2017)

Building work on this new red-brick church started in 1899, and the foundation stone was laid by the Moderator of the Presbyterian Church in Ireland, the Right Revd Dr David Alexander Taylor.

It is said that when the foundation stone of the new church was laid, Archibald Murray gave an historical sketch, and a bottle was deposited at the right-hand corner, listing the names of the Presbyterian minsters in Limerick from the reign of Charles I to October 1899. Along with it were a copy of the Limerick Chronicle and current coins of the realm, from a sovereign to a farthing.

The new church was opened on 3 October 1901 by the Right Revd Professor James Heron, Moderator of the General Assembly of the Presbyterian Church in Ireland.

Reflecting the influences of Pugin inherited by Ashlin and Coleman, this church is built in an Early English Gothic Revival style on a rectangular plan, with Ruabon brick and Portland stone dressings.

There is a three-stage corner tower and a three-sided apse to the liturgical east or geographical west.

There is a pitched natural slate roof with decorative ridge tiles and a glazed central section. There are flower finials to the gables and a weather vane on the tower roof where other churches might have a cross.

Machine-made red bricks were used in the walls, which are in English garden wall style, with Portland stone platbands, stringcourse, plinth course and dressings.

A rose window designed in Portland stone dominates the liturgical west (east) elevation, and below it there are five narrow lancet windows. Two-stage buttresses flank a pointed arch door opening formed in brick and Portland stone with drip moulding and chamfered reveals.

The double-leaf timber doors are made of herringbone timber planked with original flat-iron hinges. The corner tower has a lead roof with limestone dentillated eaves. There is a Portland stone pointed arch opening with a roundel over a pair of trefoil headed openings on the upper stage. Narrow lancets can be seen on the first floor level.

A door of similar detail to above is located on the east side elevation of the ground floor. These two doors have limestone steps flanked by brick parapets with limestone coping.

Each of the aisle bays on the north and south elevations has modern glazing recessed behind bipartitie tracery windows with a quatrefoil roundel above and a new square headed window opening below.

There is a date stone inscribed 1899 under a small window on the liturgical south (north) transept. There are flat pointed arch window openings to the basement. The pairs of windows on the octagonal apse are treated in a similar way to those on the north and south elevations.

The church was surrounded by ornamental bars and had five steps up to the front. An unusual feature was the lecture hall beneath the church. Gas provided the early system of lighting until electricity was installed in 1915. 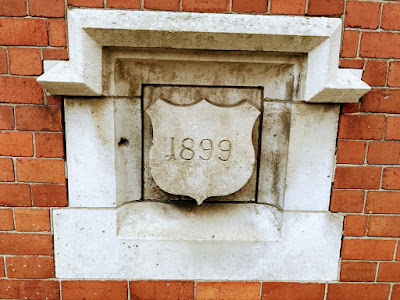 The foundation stone of the Henry Street Church inscribed with the date 1899 (Photograph: Patrick Comerford, 2017)

Meanwhile, when the new church in Henry Street Church was completed, the Presbyterians sold their old church on Glentworth Street to the printing business of George McKern & Sons in 1904. McKern’s is now owned by the Morris family and still carries on its printing business in the same premises. It is hidden away down a little alley, beside Saint Saviour’s Dominican Church, which makes it very difficult to photograph.

The Presbyterians stopped using the church on Henry Street in the 1970s. The Presbyterian Church in Limerick then amalgamated with the Methodist Church and the two formed a united congregation in Christ Church on O’Connell Street, Limerick.

For a short time, the former church on Henry Street was used as a courthouse. A local businessman and former international rugby player Pat Whelan bought the premises ca 1990. After extensive renovations ca 1995, the church is now in commercial use as an office building, and the lecture hall has also been converted into offices.

Looking at this church from the outside, the conversion to office use seems to have been visually sensitive, although I did not see inside the building. It is now surrounded by high-rise modern developments, and it is of great importance to the streetscape in Henry Street as a splendid example of what the street once looked like. 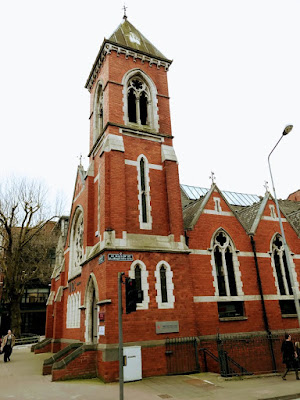 Thank you for a wonderfully detailed & informative commentary.