Easter: the triumph over the barriers we create 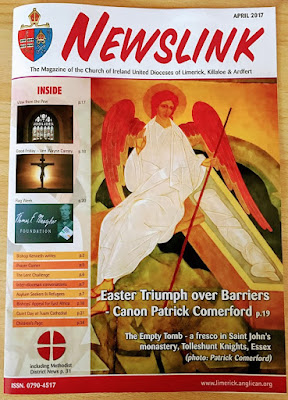 The front cover of the April 2017 edition of ‘Newslink,’ the magazine of the Church of Ireland United Dioceses of Limerick, Killaloe and Ardfert

Easter: the triumph over the barriers we create

In the Western tradition of the Church, at this time of the year, we have traditionally contemplated the cross, and then the empty tomb. But we have often neglected Christ’s resting place, his tomb, and given little thought to what was happening in the Holy Sepulchre on the second day, the Saturday.

Holy or Great Saturday is observed solemnly in the Orthodox Church, with hymns and readings that explore the theme of the Harrowing of Hell. The traditional icon of the Harrowing of Hell reminds us that God reaches into the deepest depths to pull forth souls into the kingdom of light. It reminds us how much we are unable to comprehend – let alone take to heart as our own – our creedal statement about Christ’s descent into Hell – ‘He descended into Hell.’

Christ’s descent into Hell is referred to in Saint Peter’s Pentecost sermon in Acts 2, and again in I Peter (I Peter 3:15b- 4:8), where we are told that when Christ died he went and preached to the spirits in prison ‘who in former times did not obey … For this is the reason the Gospel was proclaimed even to the dead, so that … they might live in the spirit as God does.’ 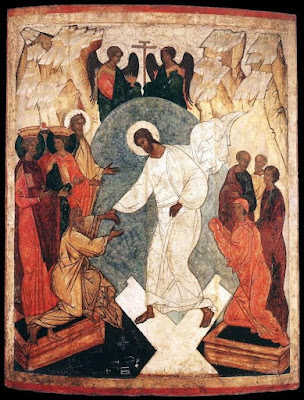 The Harrowing of Hell … a traditional Orthodox icon

In the New Revised Standard Version, I Peter 4: 6 reads that the gospel was ‘proclaimed even to the dead …’ reflecting the original Greek. The New International Version translation, however, says the Gospel ‘was preached even to those who are now dead …’ But the word ‘now’ is not in the Greek text.

The Early Church taught that after his death Christ descended into hell and rescued all the souls, starting with Adam and Eve. The traditional icon of the Harrowing of Hell links intimately the Cross with Resurrection, and Christ’s death with the Raising from the Dead. As Christ is raised from the dead he also plummets the depths to bring up, to raise up, those who are dead. The Harrowing of Hell carries us into the gap in time between Christ’s death and resurrection, breaking down the barriers of time and space.

In icons of the Harrowing of Hell, Christ stands on the shattered doors of hell. Sometimes, two angels are shown in the pit binding Satan. And we see Christ pulling out of hell Adam and Eve, along with all humanity. Christ breaks down the doors of hell and leads the souls of the lost into heaven.

Archbishop Rowan Williams has written beautifully in The Indwelling of Light on the Harrowing of Hell. Christ is the new Adam who rescues humanity from its past, and who starts history anew. ‘The resurrection … is an introduction – to our buried selves, to our alienated neighbours, to our physical world.’ He says: ‘Adam and Eve stand for wherever it is in the human story that fear and refusal began … (This) icon declares that wherever that lost moment was or is – Christ (is) there to implant the possibility … of another future.’

At Easter, the icon of the Harrowing of Hell tells us that there are no limits to God’s ability to search us out and to know us. Christ breaks down the gates of Hell, and as the icon powerfully shows, he rips all of sinful humanity from the clutches of death. He descends into the depths of our sin and alienation from God; and by plumbing the depths of hell he suffuses all that is lost and sinful with the radiance of divine goodness, joy and light.

Christ’s decent into hell pushes back hell’s boundaries. He reclaims this zone for life, pushing back the gates of death, where God is not, to the farthest limits possible, and shatters all the barriers we create in time and space.

And then his Resurrection on Easter morning truly is his triumph and our triumph over all those barriers. 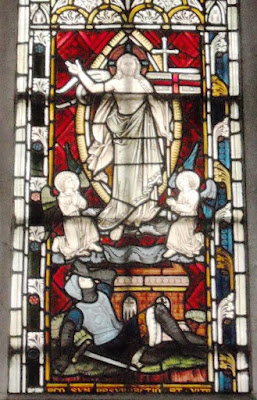 Canon Patrick Comerford is Priest-in-Charge, the Rathkeale and Kilnaughtin Group of Parishes. This full-page feature is published in the April 2017 edition of ‘Newslink,’ the magazine of the Church of Ireland United Dioceses of Limerick, Killaloe and Ardfert (p 19). 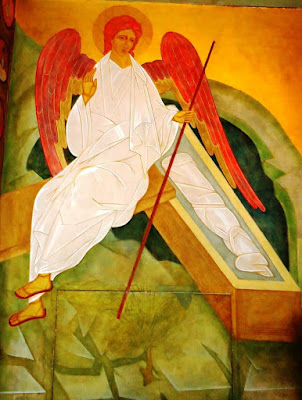