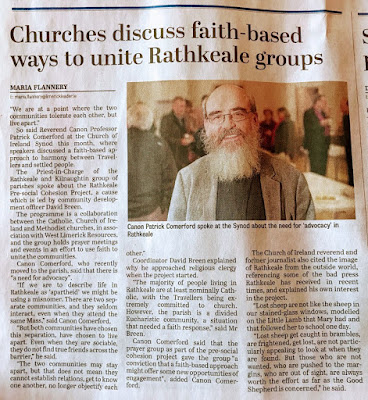 This news report is published on the back page of the ‘Limerick Leader’ today (20 May 2017):

“We are at a point where the two communities tolerate each other, but live apart.”

So said Reverend Canon Professor Patrick Comerford Patrick Comerford at the Church of Ireland Synod this month, where speakers discussed a faith-based approach to harmony between Travellers and settled people.

The Priest-in-Charge of the Rathkeale and Kilnaughtin group of parishes spoke about the Rathkeale Pre-social Cohesion Project, a cause which is led by community development officer David Breen.

The programme is a collaboration between the Catholic, Church of Ireland and Methodist churches, in association with West Limerick Resources, and the group holds prayer meetings and events in an effort to use faith to unite the communities.

Canon Comerford, who recently moved to the parish, said that there is “a need for advocacy.”

“If we are to describe life in Rathkeale as ‘apartheid’ we might be using a misnomer. There are two separate communities, and they seldom interact, even when they attend the same Mass,” said Canon Comerford.

“But both communities have chosen this separation, have chosen to live apart. Even when they are sociable, they do not find true friends across the barrier,” he said.

“The two communities may stay apart, but that does not mean they cannot establish relations, get to know one another, no longer objectify each other.”

Coordinator David Breen explained why he approached religious clergy when the project started.

“The majority of people living in Rathkeale are at least nominally Catholic, with the Travellers being extremely committed to church. However, the parish is a divided Eucharistic community, a situation that needed a faith response,” said Mr Breen.

Canon Comerford said that the prayer group as part of the pre-social cohesion project gave the group “a conviction that a faith-based approach might offer some new opportunities of engagement”, added Canon Comerford.

The Church of Ireland reverend and former journalist also cited the image of Rathkeale from the outside world, referencing some of the bad press Rathkeale has received in recent times, and explained his own interest in the project.

“Lost sheep are not like the sheep in our stained-glass windows, modelled on the Little Lamb that Mary had and the followed her to school one day.

“Lost sheep get caught in brambles, are frightened, get lost, are not particularly appealing to look at when they are found. But those who are not wanted, who are pushed to the margins, who are out of sight, are always worth the effort as far as the Good Shepherd is concerned,” he said.