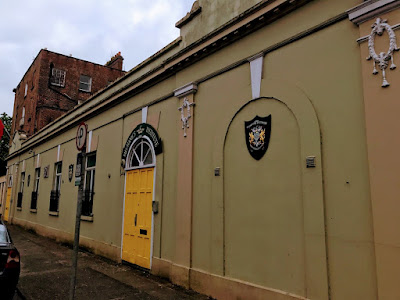 The Mechanics’ Institute … fills the rear of the site of No 6 Pery Street, Limerick (Photograph: Patrick Comerford, 2017)

The streets of Limerick are richly laden with fine example of 19th and early 20th century stucco work.

One of the exuberant examples of this stucco work is found at the Mechanics Institute, is a substantial stucco-fronted building on Hartstonge Street that fills the entire site at the rear of No 6 Pery Square.

Despite the sad-looking replacement windows, this is an interesting example of an early 20th century, classically-styled clubhouse. This seven-bay single-storey building was built ca 1920.

It has a pitched natural slate roof with black clay ridge tiles and cast-iron rainwater goods. There is cement coping to the parapet wall, with a shaped gable flanked by a pair of console brackets to the first and last bays, and these form shallow breakfronts.

The building has painted rendered walls with a cornice spanning the entire façade and that are stepped at breakfronts with a dentilated course, and with a plinth course at the ground level.

The breakfronts are framed by pilasters, each with a moulded foliate oval wreath. There are four square-headed window openings, each with a large keystone, concrete sill, uPVC window and modern mild steel railings.

A plaque with an arm and hammer carries the motto: ‘Labor Omnia Vincit Mechanics’ Institute Limerick founded 1810.’ The Latin phrase Labor Omnia Vincit (‘Work Conquers All’). This Latin phrase, which became a popular trade union slogan across the world in the 19th century, is adapted from Virgil’s Georgics, Book I, lines 145-146: Labor omnia vicit / improbus (‘Steady work overcame all things’). The poem was written in support of Augustus Caesar’s ‘Back to the land’ policy, aimed at encouraging more Romans to become farmers. 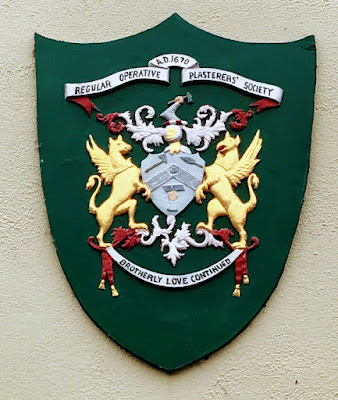 The Plasterers’ Arms on the façade of the Mechanics Institute in Limerick (Photograph: Patrick Comerford, 2017)

The coat-of-arms on the façade is that of the plasterers’ union and the text reads: ‘AD1670 Regular Operative Plasterers Society Brotherly Love Continued.’

The Operatives’ Plasterers is the oldest trade union in Ireland, with a history stretching back to 1670. On 13 December 1893, the Regular Stucco Plasterers’ Trade Union of the City of Dublin registered as a trade union. Since then, it has grown from a small Dublin-based society of around 250 plasterers to a national union, with around 1,000 members in the Operative Plasterers and Allied Trades Society of Ireland.

My great-grandfather, James Comerford (1817-1902) from Newtownbarry (Bunclody), Co Wexford, and many members of his extended family played key roles in the forming the new union at the end of Victorian era, and I was elected an honorary life member when the union celebrated its centenary. But the union has always claimed direct continuity with the city of Dublin Guild of Bricklayers and Carpenters, and the guild’s coat-of-arms, which the union continues to use, is displayed in stucco on the façade of the Mechanics’ Institute in Limerick.

A Dublin Plasterer, William D’Arcy, who was secretary of the Plasterers’ Society with 220 members, told a government inquiry in 1838 that his society was 175 or 167 years old, tracing it back to the foundation of the Guild of Saint Bartholomew of Plasterers and Bricklayers in 1670.

The Royal Charter granted by King Charles II in 1670 to the combined craft of Plasterers and Bricklayers gave legal authority to the working rules established between handicraft masters (employers), journeymen (day workers) and apprentices within the city of Dublin. Although the guild was not a trade union, it could fix prices, wages and hours, regulate apprenticeships, provide charity and maintain the standards of arts and mysteries of the trade.

The old guilds were dominated by the masters and the members exercised political and commercial power as freemen of Dublin, giving them direct representation on the city council and the right to vote in parliamentary elections. Anyone who was not a member of the Established Church of Ireland was excluded from membership.

As the Operative Plasterers’ Society expanded, branches were formed in Cork, Carlow, Leix, Mullingar, Mallow, Wexford and Clonmel among many others.

In the following year, similar institutes opened in 1825 in Limerick, as well as Armagh, Belfast, Cork, Galway and Waterford. These were followed by Carrick-on-Suir, Cashel, Coleraine and Tipperary. By the time the Mechanics’ Institute was established in Clonmel in 1842, there were 200 such institutions on these islands.

When I worked in the Wexford People in the 1970s, the shop front and the editorial offices were housed in the former Mechanics’ Institute on North Main Street.

The institutes were primarily facilities for members of the traditional crafts and the craft unions, and in hard times the rent on the Limerick premises was often paid by the Bakers’ Union. Due to a chronic shortage of money, the Limerick institute never reached its full potential. It was unable to provide lectures for the members, had no apparatus or equipment, and its main activities were confined to a reading room and library with books and newspaper.

Despite its early foundation date in 1825, a lecture in the Athenaeum in Cecil Street by William Smith O’Brien on 19 December 1857 was described as the ‘inaugural lecture.’

In the 19th century, the institute building was in Bank Place before moving to No 5 Glentworth Street, a building once owned by the Roches, one of the great merchant families in Limerick.

Later, the Mechanics’ Institute moved to No 6 Pery Square, a large Georgian Housed on the corner of Pery Square and Hartstonge Street. The composer Franz Liszt was a guest in this house when he visited Limerick in 1841.

The institute was known popularly as ‘the Bars,’ probably because unemployed members gathered at the railings outside No 6. The records of many Limerick craft unions, including the bakers, were kept in the cellar until a misguided caretaker decided to use them for fuel in the furnace.

The Mechanics’ Institute sold the house on Pery Square in the 1960s to pay off accumulated debts, but held onto the Assembly Hall in Hartstonge Street. The date 1810 outside refers not to the date of the formation of the Mechanics’ Institute, or the Operative Plasterers’ union, but to the Limerick Council of Trade Unions, which was formed in 1810 and still has offices in this interesting building. 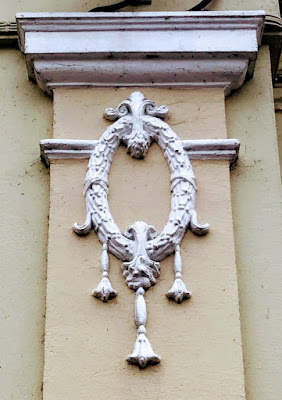 Stucco decoration on the façade of the Mechanics’ Institute (Photograph: Patrick Comerford, 2017)