The Greeks have a word
for it: (3) bread 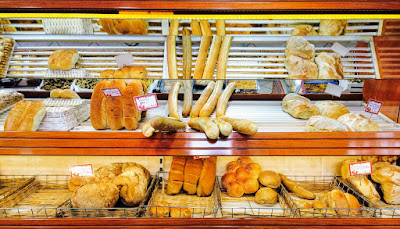 A selection of morning bread in the bakery next door in Platanes (Photograph: Patrick Comerford)

One of the delights in trying to engage with another language is realising the reasons things have different names. I try to – but usually struggle very badly – to read menus in restaurants here in Greek, but sometimes I can get it wrong, often with humorous consequences.

Last night, the menu in Marem where I was eating opened with ψωμί με Συνοδευτικά (psomí me sinodeftiká). Why would I be interested in bread with a covering letter? But starters are also ‘little things brought together.’

And there are different names in different places for the same food. Κουκουβαγια (koukouvagia) on the menu is not owl, but the name in many parts of Crete for ντάκος (dákos) – a starter of dry rusk bread topped with tomatoes, crumbled feta and oregano. In eastern Crete it is known as κουλουκοψωμο (kouloukopsomo, supposedly because this is the bread that is fed to the puppy dogs under the table.

When I thought about this last night, I wondered whether Christ was discussing dakos with the Syrophoenician woman when he spoke about taking the children’s food and throwing it to the dogs (Mark 7: 27).

Even here, Greek can be confusing, for there not only do the Greeks have a word for bread, but they have two words for bread, and here Christ uses the word ἄρτον or ἄρτος (artos), and not ψωμί (psomi).

In classical Greek, artos meant ‘cake,’ a ‘loaf of wheat-bread,’ or collectively ‘bread.’ But in modern Greek it is now more commonly used in the context of Communion bread in Church, having been replaced in the broader context by the word ψωμί (psomi), although artos is also found in common compound words such as αρτοποιός (artopoiós), baker, and αρτοποιείο (artopoieío), bakery. 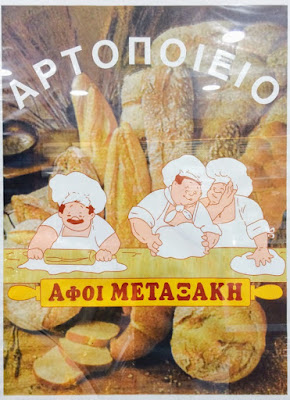 The word for bakery is a reminder of the word artos for bread (Photograph: Patrick Comerford)

Greek often has two words where English may only have one. The Greek word for red is Κόκκινος, κόκκινη, κόκκινο (Kokkinos, kokkini, kokkino), and refers to a ruby red.

But in formal settings, you find another word, as in Ερυθρός Σταυρός (Eritrhos Stavros), Red Cross.

Last night’s menu included a salad with apple and ρόδι (rodi). The English word for a pomegranate indicates an apple with seeds, while the Greek word speaks of its colour.

The roots of the English name were soon confused and forgotten, so that the pomegranate was known in early English as the ‘apple of Grenada,’ confusing the Latin granatus with the name of the Spanish city of Granada, which derives from Arabic.

The colour garnet derives its name from the Old French grenat, and in turn from the mediaeval Latin granatum meaning ‘of a dark red colour.’ This derivation may have come from pomum granatum, describing the colour of pomegranate pulp, or from granum, referring to red dye.

In Greek, the pomegranate is ρόδι (ródi), from the same root that gives us words such as rose, rhododendron and perhaps even the name of the island of Rhodes. In Greece, ρόδι or pomegranate is also used to make koliva, a mixture of wheat, pomegranate seeds, sugar, almonds, and other seeds served at memorial services.

My experiments in learning the names of foods last night were not as embarrassing as those of a journalist I met in Rhodes 20 years ago who saw παϊδάκια (spare ribs) on the menu and for a moment was stricken with horror as she though the reference was to παιδιάκιά (small children). That would have shocked the Syrophoenician woman and her daughter too. 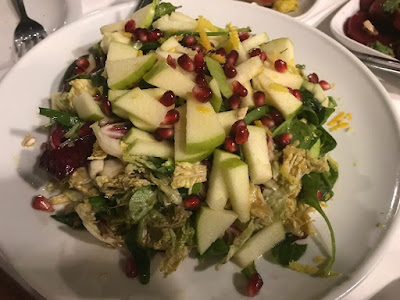 Rodi or pomegranate in a salad in Marem last night (Photograph: Patrick Comerford, 2017)