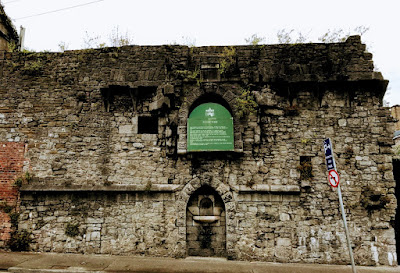 The Bourke House or Castle Friary … one of the oldest surviving houses on King’s Island, Limerick (Photograph: Patrick Comerford, 2017)

After a long journey from Crete to Limerick, with a very short stopover in Dublin, I was back in Limerick late on Thursday [13 July 2017] for a diocesan meeting.

I had a few hours after lunch in the afternoon that allowed me to browse in the bookshops, to visit the Hunt Museum and Saint Mary’s Cathedral, to go for a walk along the banks of the River Shannon before heading to that meeting.

During my walk, I stopped at Bourke House on Athlunkard Street, one of the oldest houses on King’s Island, Limerick.

However, the name of the house and its remains date from a much later period. Bourke House probably received its name from John Bourke, a Roman Catholic alderman who owned the house and lived there in 1641. The house was listed in 1654 in the Cromwellian ‘Civil Survey’ of Limerick City as the house of William Bourke of Limicke [sic] Irish Papist.

During the Penal Laws, Bourke House was used as a Franciscan friary from 1730 to 1780, so that the house was also known as the Castle Friary. 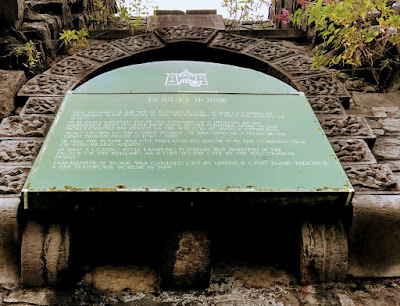 Much of the original mediaeval house was demolished in 1824 to allow the construction of Athlunkard Street. The name Athlunkard comes from the Irish Ath an Longphuirt, ‘the town of the naval fortress.’ After the demolition of the Walls of Limerick in 1760, the new bridge became an economic and social necessity with demands to expand the city into the surrounding countryside.

The new street and new bridge were improvements that were much needed in Limerick in the first decades of the 19th century. The project followed immediately after Wellesley Bridge – now known as Sarsfield Bridge – and opened up new sites for housing development.

Athlunkard Bridge opened another route from the city into Co Clare. It was the first of the Limerick bridges designed by the Pain brothers, and was soon followed by Baal’s Bridge, replacing an older bridge in 1829, and Thomond Bridge in 1838.

Only one wall of Bourke House survived this major development in town planning in Limerick, with the internal façade facing onto Athlunkard Street.

Work began on laying out Athlunkard Street on 26 April 1824. The new road cut through two mediaeval houses on Mary Street that had been built in the style of fortified tower houses. One of these houses was fully demolished, while only the north gable of Bourke House remained.

Athlunkard Street by-passed Sir Harry’s Mall and George’s Quay and opened up a direct route into Newtown Pery through Bridge Street and the New Bridge that was rebuilt in 1844-1846 as Mathew Bridge.

In 1860, a Gothic-style drinking fountain was inserted into the façade of the building as a gift to the city by the Malcolmson family.

A section of Bourke House survives to this day with the interior of the house gable facing onto Athlunkard Street. Preservation work on the house was carried out by Limerick Civic Trust through a FAS Teamwork Scheme in 1989. 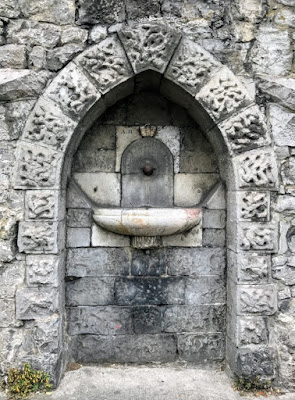 The Gothic-style drinking fountain inserted into the façade of Bourke House in 1860 was a gift to the city by the Malcolmson family (Photograph: Patrick Comerford, 2017)