The Greeks have a word
for it: (16) architecture 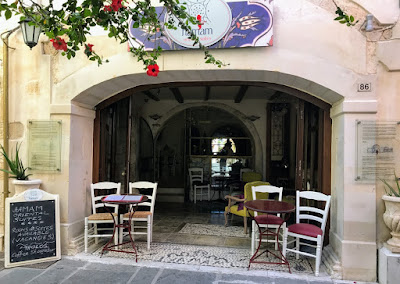 Patrick Comerford
Of course, the Greeks did not invent the concept of architecture. We have been building buildings since the dawn of time, and long before classical antiquity. But the word architecture, which comes the Latin architectura, is derived in turn from the Greek ἀρχιτέκτων (architékton), from ἀρχι- (arki-, chief) and τέκτων (tékton, builder).

Walking through the back streets of Rethymnon this week, I came across a 17th century haman or Turkish bathhouse that has been carefully restored and is now a modern hotel. Nearby, the door into a bakery preserves the Latin inscription on the Venetian portal.


The ancient Greek noun τέκτoν (tektōn) refers not just to an architect or builder, but is a common term for an artisan or craftsman, in particular a carpenter, woodworker or builder, in contrast to an iron-worker or smith (χαλκεύς, chalkeús) and the stoneworker or mason (λιθολόγος, lithológos).

The characteristic ancient Greek distinction between the general worker or woodworker and the stonemason and the metalworker occurs frequently in the Septuagint, the Greek translation of the Old Testament.

For example, the Prophet Isaiah says: ‘The artisan (tektōn) encourages the goldsmith, and the one who smooths with the hammer encourages the one who strikes the anvil, saying of the soldering, “It is good”; and they fasten it with nails so that it cannot be moved’ (Isaiah 41: 7).

The distinction occurs in lists of people working on building or repairs to the Temple in Jerusalem (see II Kings 12: 11-12). Greek word tekton is used again in the same context by the historian Josephus.

In the New Testament, Saint Joseph is described as tektōn and this is translated in almost all English-language Bibles as ‘carpenter’ (see Matthew 13: 55).

The same term occurs is used with the definite article in Saint Mark’s Gospel to describe Jesus: ‘Is not this the carpenter the son of Mary?’

In modern scholarship, the word tektōn is sometimes re-interpreted from the traditional meaning of carpenter to mean craftsman or builder. As an alternative to kharash, some writers speculate that the Greek term corresponds to the Aramaic term naggara (Hebrew |נגר nagger), ‘craftsman.’

In 1983, Geza Vermes pointed to way the word ‘carpenter’ can be used in the Talmud for a very learned man. He suggested the New Testament description of Joseph as a carpenter could indicate he was wise and literate in the Torah.

However, the Greek term tektōn does not carry this meaning. The nearest equivalent in the New Testament is the Apostle Paul’s comparison of Saint Timothy to a ‘workman’ (ἐργάτης, ergátes) rightly dividing the word of truth.

The majority of homes in northern Israel in Gospel times were built of stone. If tekton describes the family trade of Joseph and Jesus and Joseph, then nine out of ten building projects were in stone and building blocks.

If then instead Jesus was the son of a stonemason, it would explain his choice of words when he speaks of stones: ‘The stone that the builders rejected has become the cornerstone’ (Luke 20: 17).