The Greeks have a word
for it: (6) Orthodoxy 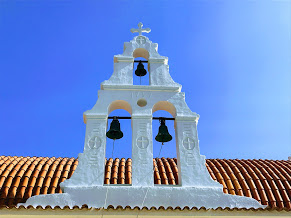 I went to church yesterday morning [2 July 2017] in the Church of Aghia Triada, the small parish church on the edges of Platanes, the suburb and resort just east of Rethymnon where I am spending these two weeks of summer.

This is a tiny church, dedicated to the Holy Trinity, and I imagine I was the only non-Greek there this Sunday morning. There is nothing remarkable about the church or the people – it is probably a good example of the Greek equivalent when I have spoken with students of the calling and value of being an ordinary priest, in an ordinary parish, with ordinary people.

There was a relaxed formality about the Liturgy, with Christ proclaimed in word and sacrament, present among ordinary people as they came and went, greeting each other and smiling at the child in her mother’s arms who shied away from receiving Communion to the point of crying.

I am surprised how the word Orthodox is used by some people when they defend their entrenched positions in current debates in Anglicanism. For example, in a recent blog posting defending the illicit ‘consecration’ of Andy Lines in Illinois as a bishop for Europe, the Revd Dr Lee Gatiss, director of the Church Society, fell back on an old quotation from Father Richard John Neuhaus (1936-2009), the former Lutheran who became a Roman Catholic priest and an adviser to George W Bush: ‘Where orthodoxy is optional, orthodoxy will sooner or later be proscribed.’

Gatiss could not bring himself to refer to Neuhass as ‘Father.’ People like Gatiss and Lines describe themselves as ‘conservative evangelicals,’ but in my opinion they are neither, for they do not value or wish to conserve the traditions of the Church, including its liturgy and forms, going back to the Patristic period; nor do they see the Gospel as good news for all – instead, neocalvinism reserves the εὐαγγέλιον (evangélion) to the few, who often give the appearance of being self-selected.

The neocalvinists I know would run a mile from the Orthodoxy celebrated in the Liturgy in Aghia Triada and other Orthodox churches throughout Greece yesterday. They would sneer at the vestments, the incense, the bells, the icons, the regular commitment to administering the Sacraments, and not notice the proclamation of Christ’s presence in word and sacrament.

The words Orthodoxy and Orthodox come from the ancient Greek ὀρθόδοξος (orthódoxos). This comes from two words: from ὀρθός (orthós), ‘straight,’ ‘correct’ or ‘right’, so that an orthodontist is someone who straightens or corrects teeth; and from the word δόξα (doxa), ‘praise’ or ‘glory,’ but also ‘opinion.’

The Greek δοκέω (dokeo, to glorify) originally referred to how something appeared to be or seemed to be. The noun δόξα (doxa, glory), the root of the term, refers to how a person or thing appears to the one who is observing.

Originally the Greek words dokeo and doxa were neutral and were used to refer to both good and bad opinions. Eventually, though, they came to be used especially and then exclusively in reference to good opinions. From that point on, the words evolved to mean praise or honour – the glory that was due to one about whom such good opinions were held. This use of the word has come into the English language in the term doxology, meaning a song of praise, usually addressed to God as Father, Son and Holy Spirit.

The Greek word ορθοδοξία orthodoxia means both ‘correct praise’ and ‘correct teaching.’ So, someone who is ‘orthodox’ not only holds the correct opinions or beliefs about God, but also gives God the right praise or glory: Δόξα ἐν ὑψίστοις (‘Glory [to God] in the highest’).

In Orthodox worship, both praise and teaching are closely interwoven. If you attentively follow the prayers and services of the Church, you can learn from them all its teachings and rich spiritual experience. 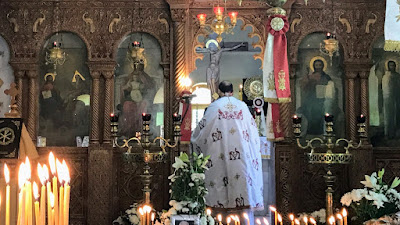 The celebration of the Divine Liturgy in Aghia Triada Church in Platanes on Sunday morning (Photograph: Patrick Comerford, 2017)

A song by Stuart Townend and Keith Getty, ‘In Christ alone,’ is sung and loved around the world by people who misuse the terms ‘conservative evangelical’ and are trying to reinterpret the definition of the word ‘orthodox.’

For a number reasons, I have argued that this hymn contains many views that could be regarded as unorthodox if not heretical, and I have never agreed to the use of this song at any service for which I have had responsibility.

The authors of this hymn, Townend and Getty, refuse to allow the full words of this hymn to be published on any website. They say this is for copyright reasons. Copyright is about recognising authors and paying them for their work. But an over-sensitive legalistic understanding of copyright and how it operates cuts off any full and robust debate about the full impact and meaning of a hymn.

In addition, they insist that whenever the hymn is published under licence, it must include every word, every spelling and every capitalisation in their original version. This not only stifles debate and criticism, but it allows the hymn-writers to control the expressions of doctrine and beliefs of churchgoers when they are singing hymns, and forces them to accept penal substitutionary atonement as a doctrine and as the only understanding of Christ’s salvific work on the cross.

The hymn is in danger too of being interpreted as denying the Trinity and teaching Arianism or adoptionism. For example, this hymn includes the words:

Till on that cross as Jesus died,
The wrath of God was satisfied.

These words imply that God the Father alone is God, and that Christ is his born or chosen agent – what Arius named as the Logos. It implies that God is angry at us in our sinfulness, that God takes out this rage on Christ instead of on us, and that this now enables God, who is God the Father, to love us.

God is not divided. There is no internal battle within the Trinitarian God, pitching the Father’s wrath against the love of Christ – indeed, this hymn leaves no place for God the Holy Spirit. Instead, the Gospel tells is: ‘For God so loved the world that he gave his only Son’ (John 3: 16).

There is a danger in talking of Jesus satisfying God’s wrath and then separating the actions of the Trinity in the cross. It appears to portray a loving Jesus saving us from an angry God who metes out his punishment upon the innocent. But it is from our sin and its consequences that Jesus saves us, rather than from a hateful God.

Some years ago, the Presbyterian Church in the US voted to leave In Christ Alone out of the new PCUSA hymnal, Glory to God, over this issue. They wanted to use the lines:

Till on that cross as Jesus died,
The love of God was magnified.

But in the process of clearing copyrights for the hymnal, the editors were told that the authors would not approve this version of the text. Townend and Getty want everyone to stick with their original words, and they considered this too great a departure from their original text. The Presbyterians were left with no choice but to vote against including the hymn because they felt the words were too offensive to sing as well as theologically offensive.

The wrath-of-God-is-satisfied approach seems to not only say that God the Father is God alone, but it also teaches that this God has some sort of anger-management issues. Yet there is no place in the Bible that states explicitly that the death of Jesus satisfies God’s wrath.

Of course, the concept of the wrath of God is present in the New Testament. For example, the Apostle Paul says: ‘For the wrath of God is revealed from heaven against all ungodliness and wickedness of those who by their wickedness suppress the truth. For what can be known about God is plain to them, because God has shown it to them’ (Romans 1: 18-19, NRSV).

And he also writes: ‘You were dead through the trespasses and sins in which you once lived, following the course of this world, following the ruler of the power of the air, the spirit that is now at work among those who are disobedient. All of us once lived among them in the passions of our flesh, following the desires of flesh and senses, and we were by nature children of wrath, like everyone else’ (Ephesians 2: 1-3).

But in these cases, God’s wrath is against the wickedness of people. Of course, God reacts against evil and seeks justice in a world of violence and injustice. But God is never described in the New Testament as being ‘angry’. This wrath is described as something both present (for example in Romans 1) and future (in Romans 5: 9). In fact, Romans 5: 9 is the only verse in the New Testament that links the death of Jesus with deliverance from wrath explicitly, and here the Apostle Paul clearly has the final judgment in mind, not some transaction that takes place on the cross at the time of Jesus’ death.

The proposed Presbyterian change was not initiated by committee members wanting to take God’s wrath out of the hymnal. Instead, the problem was with the word ‘satisfied.’

The Book of Common Prayer draws on the idea of satisfaction: ‘Almighty God, our heavenly Father, who of thy tender mercy didst give thine only Son Jesus Christ to suffer death upon the Cross for our redemption; who made there (by his one oblation of himself once offered) a full, perfect, and sufficient sacrifice, oblation, and satisfaction, for the sins of the whole world …’ (see Book of Common Prayer (2004), p 188).

The word ‘satisfaction’ has been removed from the three Eucharistic prayers in Rite 2 in the Church of Ireland (see Book of Common Prayer (2004), pp 210, 213, 216). But, even then, the ‘satisfaction’ of honour is a mediaeval concept, originating with Anselm of Canterbury in the 11th century, not one that is found in the New Testament in relation to the death of Jesus.

In any case, the Book of Common Prayer does not talk of ‘satisfying God’s wrath,’ and the emphasis here comes from its root in the Middle English satisfien, from Anglo-French satisfier, a modification of the Latin satisfacere, from satis ‘enough’ and facere ‘to do or make,’ and thus means paid or discharged in full.

Then bursting forth in glorious Day
Up from the grave He rose again.

Nor does this hymn use inclusive language, when it speaks of ‘no scheme of man’:

No power of hell, no scheme of man
Can ever pluck me from His hand.

But many neocalvinists would not find fault with a hymn that makes no concession to inclusive language, and many of them believe that women should be submissive to men in all their schemes.

Needless to say, this hymn is totally lacking in any ecclesiology (εκκλησιολογία, ekklesiología). Instead of any understanding of salvation as a collective experience celebrated within the Church, salvation is reduced to my own personal ‘fell-good’ factors.

Getty, who was born in Lisburn and was named an OBE last month, says the tune of this song is based on an Irish tune. On their own website, Townend and Getty describe this as a ‘credal song.’ But they also say it is an ‘incredible lyric.’ Incredible, indeed. Orthodox, definitely not. Giving God the right praise, I don’t think so. Expressing orthodox doctrine, hardly.

As I stood yesterday afternoon under the dome inside Saint George's Church in Panormos, between Rethymnon and Iraklion, with its bright but traditional image of Christ Pantocrator, it was impossible not to be assured that at the heart of Orthodoxy all things are created in him, and that all things are in his eternal and loving care. 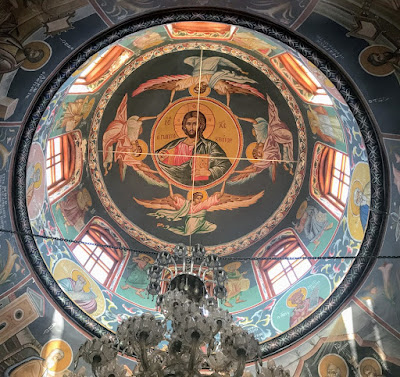 Christ the Pantocrator in the dome inside Saint George's Church in Panormos on Sunday afternoon (Photograph: Patrick Comerford, 2017)