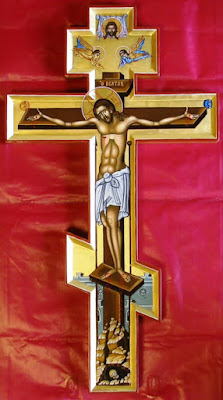 ‘Behold the Lamb of God that taketh away the sins of the world’ … the Byzantine-style crucifix by Αλεξανδρα Καουκι, icon writer in Rethymnon, Crete

Our third poem for these ‘Three Hours’ on Good Friday is the fourth stanza of ‘East Coker,’ the second poem in the Four Quartets by TS Eliot (1888-1965).

In this stanza in East Coker, Eliot responds to that very pertinent question: Why do we call this day of all days, this Friday of all Fridays, Good Friday?

Eliot’s ashes are buried in the church in East Coker, in Somerset. His Elyot Puritan ancestors left there for New England in the 1660s. The family became Unitarians and migrated to Missouri, where TS Eliot was born in St Louis.

His own life story is a pilgrimage from that Puritan Unitarian background of his birth to embracing the Christian faith in its Anglo-Catholic expression in 1927. His spiritual yearning found expression in his first great poetic work, ‘The Waste Land’ (1922), with its oft-quoted opening words, ‘April is the cruellest month …’

The Four Quartets (1942) is his last great poetic work, his religious refraction of The Waste Land. This is one of the most profound Christian works of poetry of the 20th century and the literary canon. In four long poems, each with five sections, he explores the relation of time and redemption, the self and history, the soul and the Saviour.

In the third stanza of ‘East Coker,’ he recalls:

I said to my soul, be still, and wait without hope
For hope would be hope for the wrong thing; wait without love
For love would be love of the wrong thing; there is yet faith
But the faith and the love and the hope are all in the waiting.
Wait without thought, for you are not ready for thought …
The wild thyme unseen and the wild strawberry,
The laughter in the garden, echoed ecstasy
Not lost, but requiring, pointing to the agony
Of death and birth.

In the late 1930s, Eliot cycled over to East Coker while he was staying with friends nearby. But this was not so much an ancestral village for Eliot as an idea, a poetic metaphor, an idyll of England at the start of World War II. It was, metaphorically, his beginning and his end.

In a poetic paradox, this poem begins: ‘In my beginning is my end.’ And at the end the poem he says, ‘In my end is my beginning.’

Eliot’s Good Friday in ‘East Coker’ is a place of wounded surgeons, dying nurses and

The whole earth is our hospital
Endowed by the ruined millionaire.

Even if we recover, we shall still

Die of the absolute paternal care
That will not leave us …

Good Friday, the darkest day in the Church calendar, is fraught with harsh paradoxes: the crowds that hailed Christ as king on Palm Sunday now cry for his crucifixion; the only perfect Man is condemned as a criminal; the sins of all in time and space come together and are put to death on the Cross; the eternal God perishes; and yet on this Friday of deepest tragedy, ‘in spite of that, we call this Friday good.’

TS Eliot contemplates another paradox in this poem: the mystery of our healing at the hands of a wounded Saviour.

‘East Coker’ is the second poem The Four Quartets. The fourth section presents a picture of Christ who is at the centre of all. In other parts of the work, Christ is pictured more abstractly and symbolically as ‘the still point of the turning world.’ But here, in a heart-rending way, he is human. Drawing on mediaeval and Biblical imagery of Christ as both the great Physician and the suffering Saviour, Eliot portrays the Christ of Good Friday as ‘the wounded surgeon.’

In throbbing rhythm and sharp rhyme, the five stanzas of ‘East Coker’ clothe Good Friday’s paradoxical revelations of the nature of salvation, sanctification, and sacrament in the garb of the hospital. Christ is ‘the wounded surgeon’ with ‘the bleeding hands,’ healing us who are sick in the knowing and mercy bought of his own death.

The German word seelsorger, a ‘carer of souls,’ is also a German word for priest. Among the Patristic writers, Saint John Chrysostom says that every priest is, as it were, the father of the whole world, and therefore should have care of all the souls to whose salvation he can co-operate by his labours. Besides, priests are appointed by God as physicians to cure every soul that is infirm.

Origen calls priests ‘physicians of souls,’ while Saint Jerome calls us ‘spiritual physicians.’ Later, Saint Bonaventure asks: ‘If the physician flees from the sick, who will cure them?’

In Eliot’s ‘East Coker,’ the Church that ministers his salvation is staffed by ‘dying nurses,’ attending the suffering because they share their condition. ‘The whole earth is our hospital,’ a place in which all instruments and all activity are intended to work for our healing. And yet, that healing comes through worsening sickness, unpleasing care, eventual death, and the nourishment of the ‘dripping blood’ and ‘bloody flesh’ that alone can sustain our bodies and spirits alike.

This too is a description of Eliot’s sacramental faith and piety as an Anglican, as an Anglo-Catholic.

Yet, he merely hints at the full, final healing. A joy beyond death is not proclaimed, for this poem single-mindedly honours ‘the sharp compassion’ by which ‘we call this Friday good.’ 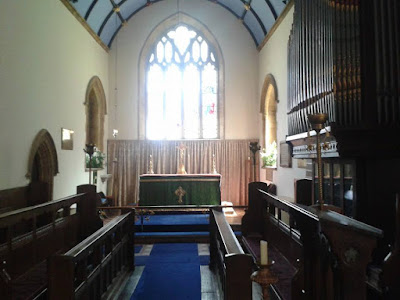 The wounded surgeon plies the steel
That questions the distempered part;
Beneath the bleeding hands we feel
The sharp compassion of the healer’s art
Resolving the enigma of the fever chart.

Our only health is the disease
If we obey the dying nurse
Whose constant care is not to please
But to remind of our, and Adam’s curse,
And that, to be restored, our sickness must grow worse.

The whole earth is our hospital
Endowed by the ruined millionaire,
Wherein, if we do well, we shall
Die of the absolute paternal care
That will not leave us, but prevents us everywhere.

The chill ascends from feet to knees,
The fever sings in mental wires.
If to be warmed, then I must freeze
And quake in frigid purgatorial fires
Of which the flame is roses, and the smoke is briars.

The dripping blood our only drink,
The bloody flesh our only food:
In spite of which we like to think
That we are sound, substantial flesh and blood—
Again, in spite of that, we call this Friday good. 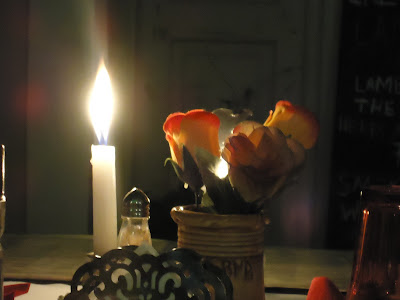 ‘And quake in frigid purgatorial fires / Of which the flame is roses, and the smoke is briars’ … a candle and a rose on a dinner table in Minares Restaurant on Vernardou Street in Rethymnon (Photograph: Patrick Comerford)

16b So they took Jesus; 17 and carrying the cross by himself, he went out to what is called The Place of the Skull, which in Hebrew is called Golgotha. 18 There they crucified him, and with him two others, one on either side, with Jesus between them. 19 Pilate also had an inscription written and put on the cross. It read, ‘Jesus of Nazareth, the King of the Jews.’ 20 Many of the Jews read this inscription, because the place where Jesus was crucified was near the city; and it was written in Hebrew, in Latin, and in Greek. 21 Then the chief priests of the Jews said to Pilate, ‘Do not write, “The King of the Jews”, but, “This man said, I am King of the Jews”.’ 22 Pilate answered, ‘What I have written I have written.’ 23 When the soldiers had crucified Jesus, they took his clothes and divided them into four parts, one for each soldier. They also took his tunic; now the tunic was seamless, woven in one piece from the top. 24 So they said to one another, ‘Let us not tear it, but cast lots for it to see who will get it.’ This was to fulfil what the scripture says,

‘They divided my clothes among themselves,
and for my clothing they cast lots.’

25 And that is what the soldiers did.

28 After this, when Jesus knew that all was now finished, he said (in order to fulfil the scripture), ‘I am thirsty.’ 29 A jar full of sour wine was standing there. So they put a sponge full of the wine on a branch of hyssop and held it to his mouth. 30 When Jesus had received the wine, he said, ‘It is finished.’ Then he bowed his head and gave up his spirit.

31 Since it was the day of Preparation, the Jews did not want the bodies left on the cross during the sabbath, especially because that sabbath was a day of great solemnity. So they asked Pilate to have the legs of the crucified men broken and the bodies removed. 32 Then the soldiers came and broke the legs of the first and of the other who had been crucified with him. 33 But when they came to Jesus and saw that he was already dead, they did not break his legs. 34 Instead, one of the soldiers pierced his side with a spear, and at once blood and water came out. 35 (He who saw this has testified so that you also may believe. His testimony is true, and he knows that he tells the truth.) 36These things occurred so that the scripture might be fulfilled, ‘None of his bones shall be broken.’ 37 And again another passage of scripture says, ‘They will look on the one whom they have pierced.’

We glory in your cross, O Lord,
and praise you for your mighty resurrection;
for by virtue of your cross
joy has come into our world.

God be gracious to us and bless us:
and make his face shine upon his,
that your way may be known upon the earth,
your saving power among all nations.

O let the nations rejoice and be glad,
for you will judge the peoples righteously
and govern the nations upon earth.

We glory in your cross, O Lord,
and praise you for your mighty resurrection;
for by virtue of your cross
joy has come into our world.

Holy God,
holy and strong,
holy and immortal,
have mercy upon us.

(From the Good Friday Anthems, ‘Common Worship: Times and Seasons’) 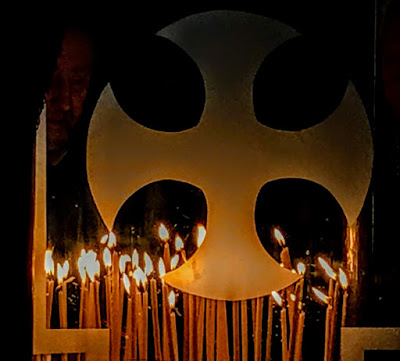 ‘We glory in your cross, O Lord, and praise you for your mighty resurrection; for by virtue of your cross joy has come into our world’ … Saint John Chrysostom says priests are appointed by God as physicians to cure every soul that is infirm (Photograph: Patrick Comerford)

Common Worship: Times and Seasons, material from which is included in this service, is copyright © The Archbishops’ Council 2006.