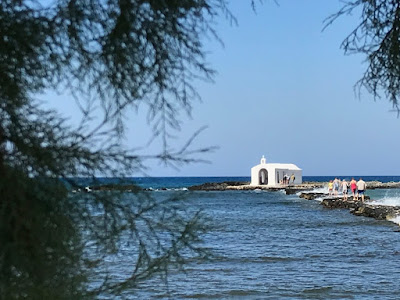 The chapel of Aghios Nikolaos has become a symbol of Georgioupoli (Photograph: Patrick Comerford, 2017)

Having spent Friday morning [7 July 2017] in the mountains above and west of Rethymnon, visiting Argiroupolis with its springs and waterfalls, Kournas which was briefly the capital of revolutionary Crete, and Lake Kournas, the only freshwater lake in Crete, our group moved back down to the coast and spent the afternoon in Georgioupoli.

This was once a small fishing village where three rivers meet the sea at Almiros Bay, 22 km west of Rethymnon. The largest of these three rivers, the Almiros, creates a small harbour that is used today by both fishing boats and tourist boats.

Archaeological evidence points to Georgioupoli (Γεωργιούπολη) as the site of ancient Amphimalla (Amfimala or Amfimalion), the port of Lappa, a classical city at modern Argyroupoli.

Today, Georgioupoli is a resort village with a long sandy beach that stretches for 9 km and many cafés, tavernas, small hotels and apartment blocks.

With a population of about 500, Georgioupoli is the largest village of the municipal unit of the same name that includes several neighbouring villages inland as far as Kournas. 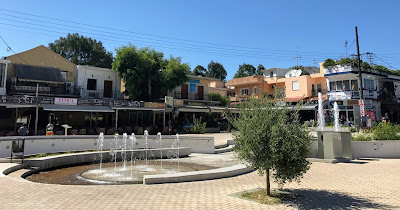 The broad town square in Georgioupoli was part of a vision for creating a new resort over a century ago (Photograph: Patrick Comerford, 2017)

The wide, open town square, with its fountains, shops and outdoor seating, hints at the plans that were developed in the late 19th century to turn this into an elegant town.

The town takes its name from Prince George, the second son of King George of Greece, who was appointed High Commissioner of Crete in 1898. Prince George built a shooting lodge here, and there was a vision of creating a Brighton of Crete at this spot.

But Prince George’s time on the island was short-lived. An autonomous island government was established, but Crete still technically remained under Turkish sovereignty. A revolt led by Eleftherios Venizelos forced the unpopular Prince George to resign in 1905 and Crete was united with the modern Greek state in 1913.

The vision for Georgioupoli never developed, and the town hall of Georgioupoli municipality is at Kavros-Kournas. It was not until the boom in modern tourism that this became a popular resort. 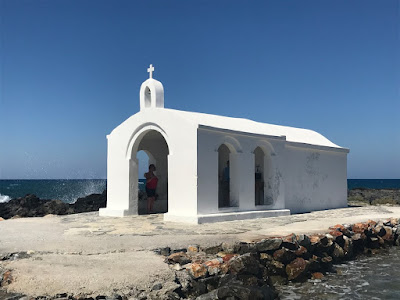 The tiny whitewashed chapel of Aghios Nikolaos is the most photographed place in Georgioupoli (Photograph: Patrick Comerford, 2017)

If Brighton has its pavilion, then the most photographed site in Georgioupoli is the tiny white-washed chapel of Aghios Nikolaos (Άγιος Νικόλαος, Saint Nicholas) on a small rocky islet in the middle of the sea.

Saint Nicholas is the protector of seafarers but rather than reaching the chapel by boat many tourists take the challenge each day of walking out to the chapel along a narrow rocky causeway.

The rocky outcrop of Aghios Nikolaos is officially listed as a Greek island, and the chapel of Aghios Nikolaos is a popular choice for weddings on Crete. But it is difficult to imagine how the bride and the wedding party can arrive in a dry and pristine condition. The causeway is rocky and slippery, and even in this summer weather as I picked my way along the rocks, the waves at times were hitting me at chest level.

And yet, tourists kept on walking the length of the causeway to reach the chapel throughout the afternoon, and none turned back.

Inside, the chapel is simple and modest, with a few icons of Saint Nicholas and other saints, a simple iconostasis and a small altar. It was heartening to notice how many tourists, once they had made the journey on foot along the slippery causeway, stopped for a few moments to light a candle and pray before turning back to hobble along the rocks to the harbour at Georgioupoli. 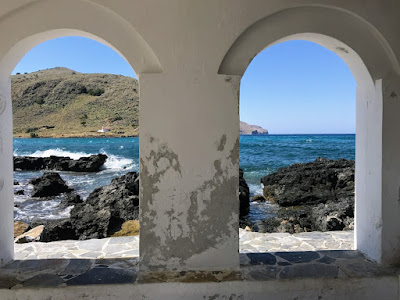 Inside the chapel of Aghios Nikolaos (Photograph: Patrick Comerford, 2017)