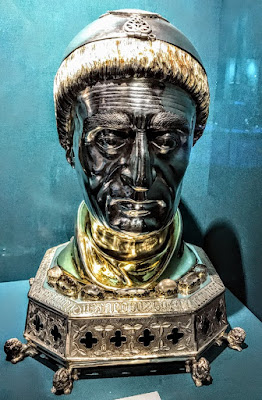 The reliquary made for relics of Saint Patrick, now in the Hunt Museum, Limerick (Photograph: Patrick Comerford, 2017)

During my recent visit to the Hunt Museum in Limerick, I wondered about a silver reliquary bust that was made for relics of Saint Patrick.

This reliquary, which is in the shape of a tonsured head, appears to have been made in France, perhaps in the late 15th century. It has a hinged top and there is an oval grille in the top of the head to allow the relic to be seen. The head is placed on an octagonal base with quatrefoil decoration, that was made in Ireland and is inset with nine crystals. The reliquary is supported by seven crouching lions.

The transcription and translation is uncertain. The reliquary is believed to have contained a relic from the skull of Saint Patrick, but leads to many questions, including:

If Saint Patrick is buried in Downpatrick, which relic from saint were supposed to be displayed in this reliquary?

And which James Butler, Earl of Ormond, commissioned this reliquary?

The Justiciar or Chief Justiciar was the equivalent of a modern Prime Minister. From the end of the 12th century up to the middle of the 14th century, the chief governor was usually styled ‘justiciar.’ In the later mediaeval period, the titles ‘lieutenant,’ ‘deputy lieutenant’ or ‘lord deputy,’ were the most common designation for the chief governor of Ireland, although the title of justiciar continued to be used until the late mediaeval period.

Four James Butlers may be considered as the potential patrons who commissioned this work:

As the reliquary is a late mediaeval work made before the Reformation and probably in the 15th century, the Dukes of Ormonde can be eliminated from any discussions, and the only two candidates to be considered as the commissioning patron are the fourth and fifth earls of Ormond.

The reliquary has been compared to Tuscan works of the late 15th century and also with similar head reliquaries, including a Byzantine-style head of Pope Alexander II (1061-1073), made in 1145 in the Abbey of Stavelot, now in Walloon, Belgium, and held in the Musées Royaux d’Art et d’Histoire in Brussels, and another of Frederick Barbarossa (1122-1190), made in Aachen ca 1171-1175 and later used as a reliquary in Cappenberg Abbey in Germany.

There was a similar treasure in Grandmont Abbey, near Limoges, in France. The Grandmont bust represents Saint Etienne Muret, hermit and founder of the Grandmont order. It may have been made long before it was donated to Grandmont Abbey in the late 15th century by the French statesman Cardinal Guillaume Briçonnet (1445-1514).

These comparisons to suggest that the reliquary or shrine associated with Saint Patrick was made after the mid-12th century and long before the end of the 15th century, which leaves unanswered the questions about James Butler, Earl of Ormond, was the original patron or commissioner.

It also leaves unanswered the questions about which remains or relics associated with Saint Patrick were ever held in this reliquary.

Tradition says Saint Patrick was buried in Saul, but that he was later reburied in Downpatrick alongside Saint Brigid of Kildare and Saint Columba (Colmcille) of Iona.

Over the centuries, the location of the actual burial sites was forgotten or lost. But in 1186, Malachy, Bishop of Down, claimed that in answer to prayer their place of burial had been revealed to him in a dream one night. He claimed he saw a heavenly light settle like a sunbeam on a spot at the Benedictine Cathedral in Downpatrick, where he ordered his priests to dig. They disinterred three bodies, and these were claimed as the remains of Ireland’s three patron saints.

Bishop Malachy and John de Courcy applied to Rome for permission to move the bodies to the cathedral. Cardinal Vivian was sent from Rome to Down as a special legate to superintend the removal of the relics.

On 9 June,1186, 15 bishops, many abbots and church dignitaries and a large number of clergy and laity were present at the reburial of what were now revered as the relics of Saint Patrick, Saint Brigid and Saint Columba (Columcille) in Downpatrick. Before the burial, some of the relics were enshrined and placed on the High Altar. Most of his remains were reburied at Downpatrick, but some of the relics were brought back to Rome by Cardinal Vivian. One of the relics sent to Rome was supposedly a bone from Saint Patrick’s arm, and a reliquary was later made to enshrine this bone.

Other relics of Saint Patrick for which reliquaries were made included his lower jawbone, various teeth, his crozier, his bell and his book. The authenticity of many of these relics is questionable, but collectively they have had a cultural impact on religious piety and practice in Ireland over the centuries.

Legend says the ornate Shrine of Saint Patrick’s Tooth or Fiacal Pádraig once contained an actual tooth Saint Patrick lost while visiting a church of Killaspugbrone, near Strandhill, Co Sligo. A wooden box coated in gold, silver and amber was made in the 14th century to hold the hallowed tooth.

According to the Annals of Cong Abbey, this tooth was held in a handsomely decorated shrine of wood in the shape of a horseshoe, with a metal plate at the top of a highly decorated rim of brass, silver, and gilt material. On the front was a metal work cross with two figures on each side above shamrock arches. Beneath was a row of raised gilt figures representing Saint Brigid, Saint Patrick, Saint Columcille and Saint Brendan. On the back was a raised cross and four figures, including a woman holding a harp. It was highly decorated with crystals, stones and amber studs.

In the early 19th century, a man named Reilly made a living by traveling with the shrine across Ireland offering cures. One day, Reilly met a priest who asked him to verify its authenticity as he examined it. Reilly said it once belonged, to the canons of Cong. Father Prendergast then claimed the last of the Augustinian canons of Cong, took the shrine and rode off with it.

The tooth is long lost, but the reliquary, which was held for years in the Royal Irish Academy, is now in the National Museum of Ireland in Kildare Street, Dublin.

Other teeth appeared in different parts of Ireland, said to have been preserved by his disciples. One gave its name to Kilfeacle or Cill Fiacail (the Church of the Tooth), near Tipperary town.

Five teeth were said once to be held in the Shrine of Saint Patrick’s Jawbone. For many years, this silver shrine was kept by an ordinary family near Belfast. It oncle included five teeth, but now holds only one. Three teeth were given to members of the family emigrating to America, and a fourth was deposited under the altar of the Roman Catholic Church of Saint Colman and Saint Patrick in Derriaghy, Co Antrim, when it was rebuilt some years ago.

The silver reliquary with Saint Patrick’s Jaw, fashioned in 1645, was later transferred to Saint Patrick’s Church, Belfast, and is now on loan to the Down County Museum in Downpatrick.

The Shrine of Saint Patrick’s Hand is on display in the Ulster Museum in Belfast, and once enshrined a severed arm and hand popularly believed to have been Saint Patrick’s. However – like his many teeth – the bone itself has long disappeared.

When Edward Bruce invaded Ireland, he plundered the Cathedral at Downpatrick and the shrine of Saint Patrick’s arm and hand was carried off in 1316. Nothing further is heard of the shrine for some centuries, when it is found in the possession of the Magennis family of Iveagh, some of whom were Abbots and Bishops of Down.

About 1710, a daughter of the Magennis family married George Russell of Rathmullan, Co Down, and brought the relic with her. Their daughter, Rose Russell, married Rowland Savage of the Ards and so the shrine came into the possession of the Savage family. The head of the family changed his name to Nugent, and as a member of the Church of Ireland was not interested in keeping the shrine in his family. He gave it over to the parish priest of Portaferry, and when Father Teggart died in 1765, the shrine passed of the McHenry family of Caristown in the Upper Ards. Eventually, the McHenry family handed over the reliquary to Dr Cornelius Denvir (1791-1866), Roman Catholic Bishop of Down and Connor (1835-1865).

When Dr Denvir opened the shrine in 1856, he found it contained no relic, but merely a piece of yew wood almost a foot long, with an aperture just large enough to hold the wrist bone of a human arm. This was smeared over at both ends with wax seals that had been impressed on the inner wooden receptacle, perhaps to keep the bone in position. The relic in the shrine had apparently been worn away through constant use.

The shrine is a beautiful silver case in the shape of a hand and an arm up to the elbow, and the fingers are bent, as if they were giving a blessing.

The bronze Bellshrine of Saint Patrick was made in the 12th century for King Domhall Ua Lochlainn to hold the bell that once belonged to the saint. This shrine is highly decorated with silver and gold filigree, figures and studs of crystal and glass. The bell inside is plain iron and shaped like a cowbell. It too is in the National Museum in Dublin.

But the crozier was denounced as an ‘object of superstition,’ and was burned publicly at the Reformation in the 16th century.

Of course, none of this fully answers many questions:

● When was the reliquary in the Hunt Museum made?

● Which Earl of Ormond was it made for?

● Which relic or relics did it hold?

● Was it kept in Kilkenny Castle?

● Where was it kept and who owned it before it arrived in the Hunt Museum?

I might even be permitted to ask, with tongue in cheek:

● How many teeth did Saint Patrick have? 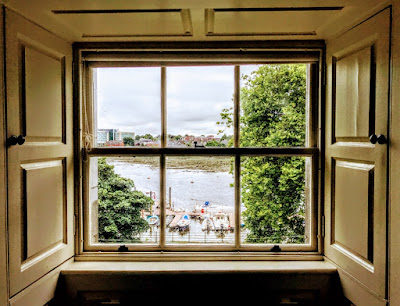 See this site for a picture of the sculpture of St Etienne de Muret which has remarkable similarities to the reliquary of St Patrick in the Hunt Museum: