Charles Darwin adds value
to the £10 note in my pocket 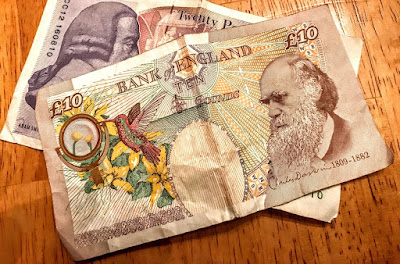 Charles Darwin looks like ‘a very venerable, acute, melancholy old dog’ on the £10 note … and is about to disappear

I have had a habit for many years of keeping some English sterling notes in my wallet and a handful of sterling coins in my pocket. It is not that I need them in unexpected ways, but sometimes it is easier to put £10 or £20 folded into a card in an envelope than go to the bother of ordering a bank draft or writing a cheque that I know is going to be discounted heavily.

But the real reason for keeping this currency close to hand is to cope with arriving at the airport in Birmingham and Stansted, paying for my train ticket with plastic, finding I have a 15 or 20-minute wait for a train to Lichfield or Cambridge, and not having enough small change to indulge my need for an early morning double espresso.

It is embarrassing to ask to pay for a such a small pleasure with plastic – although the new £5 or £10 notes seem to indicate that everything is going to be paid for in the future with plastic in one form or another.

Perhaps holding onto these notes – I found £20 with Adam Smith and £10 with Charles Darwin – in my wallet yesterday has been an unwise investment. When he devalued the pound 50 years ago in 1967, Harold Wilson famously promised the public that the ‘pound in your pocket’ would not change value. But Brexit certainly means the few pounds in my pocket and my wallet have changed their value, and have almost dropped to parity with the Euro.

The new Jane Austen £10 note went into circulation yesterday [14 September 2017], and I joked on social media that this must be the ‘Brexit tenner – 52% Pride and Prejudice, 48% Sense and Sensibility.’

It seems to be symptomatic of the post-Brexit climate in Britain that Jane Austen should be chosen for the new plastic note. She represents a romantic hankering after a ‘green and pleasant land’ in the past that actually never existed and that is a fictional creation of English minds.

At least I should be thankful that Jane Austen was chosen as the author for the new £10 note, and not Jeffrey Archer.

But I am sorry to see Charles Darwin disappear from the £10 note. Not only is there the inconvenience of now finding and exchanging or getting rid of the few notes that are lying around the house in pockets and drawers, but I have a feeling that dropping Charles Darwin is symptomatic of the way rational discourse, argument and the search for truth has gone from public discourse in England in the wake of the Brexit referendum.

When I posted a photograph of one of those £10 notes on Facebook yesterday, with the image of Charles Darwin, another member of the Comerford family replied: ‘You look well on the tenner … I mentioned to you before about the hair and beard lines in Comerfords.’

In haste, I mentioned: ‘There is a vague link to Charles Darwin in the Comberford family … too distant to boast about, too near not to consider the resemblance.’ To which an old school friend responded: ‘The apple doesn’t fall far ...’ 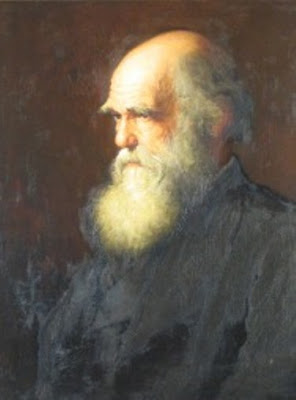 His portrait in the College Hall is a copy (1883) by the artist, Walter William Ouless (1848-1933), of one commissioned by the Darwin family in 1875 as a birthday present. Darwin quipped the portrait made him look like ‘a very venerable, acute, melancholy old dog.’

The Darwin family still has many connections with Cambridge, but I was also aware of the family connections with Lichfield. His grandfather, Dr Erasmus Darwin (1731-1802), lived beside the Cathedral Close from 1757, and his house, which now faces onto Beacon Street, is now an interesting museum, with beautiful gardens.

Edward Sacheverell Pole had fought at Fontenoy and Culloden. Within a year of his death, the widowed Elizabeth married the widowed Dr Erasmus Darwin, then 49 and already the father of a large family. They had already developed a romantic relationship in 1775, and following their marriage in 1781 Erasmus Darwin left Lichfield and Elizabeth and Erasmus Darwin lived briefly at Radbourne Hall, the 18th-century Georgian country house in Derbyshire that had been the seat of the Pole family for generations.

Elizabeth and Erasmus had seven more children, and Elizabeth was also the stepmother of his children from his first marriage. They included Robert Waring Darwin (1766-1848), who was born in Lichfield in 1766 and who grew up as a step-brother of Sacheverell Chandos-Pole.

This Sacheverell Chandos-Pole was the father of the Revd William Chandos-Pole (1833-1895), whose kinship to Robert Darwin’s son, Charles Darwin, was akin to them being first cousins.

A succession of Poles and Chandos-Poles were rectors of Radbourne, including the Revd William Chandos-Pole, who was appointed in 1866. He was married to Christina (Askew) and a year later their son, Christopher Askew Chandos-Pole, was born at Radbourne in 1871. In 1898, Christopher married Constance Marian Schwind in 1898, and they moved to Comberford Hall with their children, Christina and Peter, around 1912.

And so, as far as I could find, the connection between Charles Darwin and Comberford Hall is both remote and obscure. The rector who was the equivalent of his first cousin but who was related only through marriage was the father of a man who had lived briefly at Comberford Hall.

But it was interesting enough a connection to put that £10 note back into my wallet with a little more interest than is being offered by the banks in the wake of Brexit. To paraphrase Harold Wilson’s adage from 50 years ago, the £10 in my pocket is still of value to me. 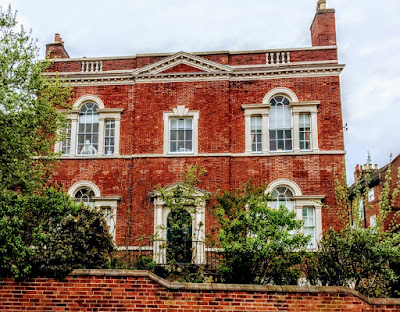