An island parish and
a parish of islands
and rocky outcrops 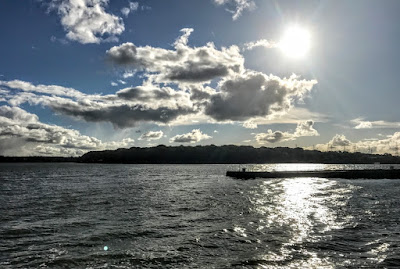 Counting the islands and islets in the estuary of the River Shannon (Photograph: Patrick Comerford, 2017; click on images for full-screen view)

Island parishes make for great television and seem to be an alluring and enduring concept culturally on all these islands.

The BBC2 documentary An Island Parish has run to 12 series. It began with Series 1 and 2, looking at the life of the Church of England parish on the Isles of Scilly, which is part of the Diocese of Truro.

Series 3 and 4 looks at the work of the Methodist Church on the Isles of Scilly, seen through the eyes of the Revd David Easton.

Series 5 is about Father John Paul’s first year as the Roman Catholic priest at Castlebay on the island of Barra in the Outer Hebrides. Series 6 returned to Barra.

Series 7 and 8 follow the Anglican priest and Methodist minister on Sark in the Channel Islands. Series 9 and 10 focus on the Falkland Islands, Series 11 is set on the Shetland Islands, and Series 12, broadcast earlier this year [2017], is based on Anguilla.

How big is an island before it becomes the mainland?

How small is an island before it becomes an islet?

How small is an islet before it becomes a rocky outcrop?

During the summer, I visited the tiny white-washed church of Agios Nikolaos Church on a rocky islet off Georgioupoli, 22 km west of Rethymnon, one of the most photographed and most beautiful churches in Crete and a popular location for weddings.

Agios Nikolaos, administratively, is part of the municipality of Georgioupoli. It has no houses, no residents, and no parishioners, but is still officially listed among the more than 84 Cretan islands. 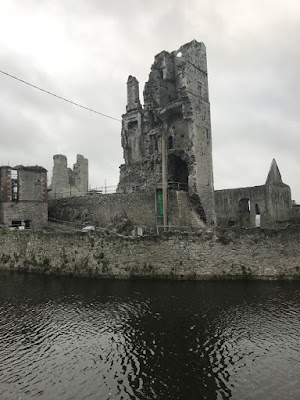 Desmond Castle in Askeaton stands on a small island in the middle of the River Deel (Photograph: Patrick Comerford, 2017)

The town of Askeaton is built around an island on which stands the tall and majestic ruins of the Desmond Castle, built on a secure rock on an islet where the River Deel splits on its way down to the Shannon Estuary.

Foynes Island provides a shelter for the harbour at Foynes (Photograph: Patrick Comerford, 2017)

At the east end of the parish boundaries are Pigott’s Island, Waller’s Island and Bushy Island, close to Castletown Church and Pallaskenry. Waller’s Island has an area of 0.17 hectares or less than half an acre (0.41 acres or 1 rood, 26 perches).

Pigott’s Island is also in the parish of Kilcornan and is just three acres in size, yet is a townland all on its own.

As a townland, Bushy Island in Kilcornan Parish includes not only a tiny island joined to the mainland, but a large part of the mainland so that together they make up a townland that extends to 64.33 hectares or 0.6433 sq km (0.25 square miles or almost 159 acres).

Greenish Island and the mouth of the River Deel, where it flows into the Shannon Estuary immediately north of Askeaton (Photograph: Patrick Comerford, 2017)

In the mouth of the River Deel, where it flows into the Shannon Estuary immediately north of Askeaton, Greenish Island is the largest of the small islands, islets, rocky outcrops and raised mudflats and sandbanks that are marked on maps. Close by in the river are Greenish Island, are White’s Island and the little island of Lan Tighe. In 1876, Henry Blackwell had 71 acres on Greenish Island, Askeaton, Co Limerick.

Aughinish Island is in the Shannon estuary, between Askeaton and Foynes. Rusal Aughinish, Europe’s largest bauxite refinery, is located on the island. The site includes a deep-water jetty in the Shannon through which the refinery imports bauxite from Guinea and Brazil and exports alumina to be refined into aluminium metal.

Aughinish, which extracts millions of tonnes of alumina, leaves huge amounts of distinctive red-coloured bauxite residue, which is stored as red mud on 450 acres of land near Askeaton.

‘It is a red island now,’ Jim Long, a former Mayor of Limerick, told the Irish Times some years ago. And he asked: ‘What if there is freak flash flooding or increased rainfall in the area? I would be concerned about the River Shannon if vast amounts of this stuff got into it.’ He described the red coloured landscape as ‘completely out of sync’ with the estuary’s natural habitat, that is home to protected wildlife including dolphins, otters and birds.

Although most of the island is occupied by chemical industries, I was surprised to learn also that this is also the site of Ireland's first butterfly sanctuary, located in an abandoned quarry.

Island Macteige was once an island off Aughunish, but it is now joined to the mainland and is now a peninsula.

Further west, Foynes Island is a townland of its own too and has an area of almost 128 hectares (1.28 sq km), or a half square mile (316 acres). There are two houses on Foynes Island and a few industrial silos. The 1911 census shows 28 people living on the island, but I believe no-one has lived there for a number of years. 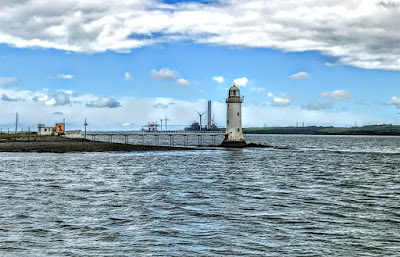 The lighthouse is a landmark on Tarbert Island (Photograph: Patrick Comerford, 2017)

When I continue west into the Diocese of Ardfert and Co Kerry, Tarbert Island is linked to the neighbouring town of Tarbert and the mainland by a short isthmus. The island covers 27.61 hectares (0.2761 sq km) or 0.11 square miles (68 acres). A car ferry runs between the island and the Killimer, near Kilrush, Co Clare. The island also has a small lighthouse and an electricity plant. 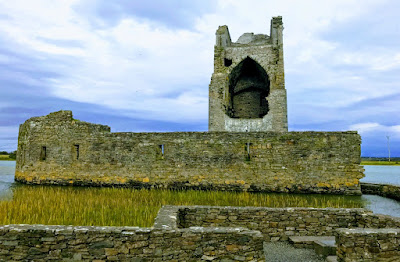 Carrigafoyle Castle stands on its own islet or rocky outcrop (Photograph: Patrick Comerford, 2017)

Further west, Carrigafoyle Castle stands alone on its own tiny island, or is it an islet? Climbing the spiral stairs inside the castle, there is a full view from the parapets at the top up and down the Shannon Estuary and across to Carrig Island, linked to the mainland by a long causeway.

There are other islands in the estuary, including Lisilaun, known in Irish as An Leis Oileán, Rincawinaun and Sturamus Island, as well as numerous other islets, rocky outcrops, mudflats and sandy banks that only see the light of day at low tide.

So that’s more than a dozen islands … and I’m still counting.

Looking across to Carrig Island from the battlements of Carrigafoyle Castle in Co Kerry (Photograph: Patrick Comerford, 2017)