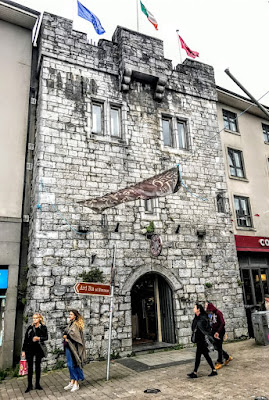 Blake’s Castle … a surviving tower house of one of the Tribes of Galway (Photograph: Patrick Comerford, 2017)

In my furtive search I failed to find Forster House in Galway yesterday [12 October 2017]. During an afternoon break from the conference in Galway, I was searching for the house on Forster Street off Eyre Square that was the birthplace of Charles ffrench Blake-Forster (1851-1874), the romantic Victorian genealogist who popularised many of the stories about the origins of the Comerford family in Ireland.

Charles ffrench Blake-Forster was a prodigal but controversial journalist, writer, historical novelist, periodical writer and genealogist, and his mother, Mary Josephine Comerford, was from Galway.

Charles Blake-Forster was proud of his descent from the Comerford family and his long lineage traced through the Blake-Forster and ffrench families.

Charles ffrench Blake-Forster, was born in Forster House on Forster Street and gave a highly colourful but mythical account of the origins of the Comerford family in his The Irish Chieftains, or, a struggle for the Crown (1872). In this book, he does not give his source for ‘an ancient vellum Ms’ that contained the family tree of the Comerfords and it has never been traced.

Having failed to find Forster Street House yesterday afternoon, I walked across to the Spanish Arch and photographed Comerford House, a house long associated with another branch of the Comerford family.

Close to Comerford House, at the bottom of Quay Street, I stopped at Blake's Castle, which Charles Blake-Forster would have claimed as another ancestral home, alongside Forster House.

Blake’s Castle on Quay Street in the heart of Galway was built around 1470 and is a typical mediaeval, urban tower house. It preserves a number of key features, including the interesting and unusual trefoil-headed windows to one corner, and the restored machicolation to the roof level that would have defended the doorway.

This three-storey castle has a single-bay ground floor and first floor and a two-bay second floor. The castle has a flat roof with a crenellated parapet, with projecting machicolation on supporting corbels to the top floor above the entrance.

There are square-headed window openings to the upper floors, double-lights to the top floor and a single-light to first floor, which have recent chamfered limestone block-and-start surrounds.

East corner of the first floor has cusped trefoil-headed windows to two sides, with tooled stone surrounds. The three-centred doorway at the ground floor has a limestone surround, and the walls are built of coursed, roughly-dressed limestone rubble.

The Blake family claimed to be descended from Ap-lake, one of the Knights of the Round Table. In fact, the family arrived in Ireland with the Anglo-Normans, and is descended from Richard Caddell, who was Sheriff of Connaught in 1306. He was nicknamed niger in Latin or ‘Black’ in English, and the name Blake derives from this name.

The Blakes of Galway were a powerful family, with several important castles at Menlo, Ardfry, Ballyglunin, Castlegrove and other places. They were one the ‘Tribes of Galway’: Athy, Blake, Bodkin, Browne, D’Arcy, Deane, ffont, ffrench, Joyce, Kirwan, Lynch, Martin, Morris and Skerritt.

Sir Valentine Blake (1560/1562-1635) was described as the richest man in Galway in 1592. The eldest of three sons of Walter Blake and Juliana Browne, Blake owned extensive property in Galway, Mayo and Clare. He lived in Galway and at Menlo Castle, four miles north of Galway. He was elected Sheriff of Mayo in 1611, but when he refused to take the Oath of Supremacy he was dismissed. He was elected MP for Galway in 1613 and Mayor of Galway (1611 and 1630-1631).

He became a baronet in 1622 and is the ancestor of the Blake baronets of Menlo, currently represented by Sir Anthony Teilo Bruce Blake, 18th Baronet.

Sir Richard Blake’s direct descendants died out in 1744, but a kinsman, Joseph Blake, bought the estates from trustees and moved to Ardfry around 1770 and built a house on the site of an old castle.

His son, Joseph Henry Blake (1765-1803), conformed to the Church of Ireland. As MP for Co Galway he voted for the Act of Union and was given a peerage in 1800 as Lord Wallscourt of Ardfry.

The title was created with remainder to the heirs male of the body of his father, Joseph Blake. When Lord Wallscourt died in 1803, he had one daughter and his father was still alive, but neither was among the heirs to the title. The barony was suspended for three years, and Lord Wallscourt was finally succeeded by his nephew, Joseph Henry Blake (1795-1816), as the second baron, in 1806.

This second Lord Wallscourt never married and died before reaching the age of 21. The title then passed to his 18-year-old cousin, Joseph Henry Blake (1797-1849), as 3rd Lord Wallscourt. He was an early adherent of socialism. During his travels in Europe, he was first impressed by ‘some of the theories, then much debated, for lifting the labourer into the position of partner with the capitalist.’

Following a visit to the co-operative commune established by John Scott Vandeleur and Edward Thomas Craig at Ralahine in Co Clare, Wallscourt tried to introduce socialist theories to his estate at Ardfry. He was a supporter of the Young Ireland movement and the French revolutionaries in 1848, although he he did not believe that armed revolution was a practical proposition in Ireland during the Great Famine.

His wife divorced him for adultery and his unreasonable and eccentric behaviour, which included violent rages and a penchant for public nudity, which he described as a ‘fresh-air bath.’ He died of cholera in Paris in 1849.

This second family title died out in 1920 at the death of his grandson, Charles William Joseph Henry Blake (1875–1920), 5th Lord Wallscourt.

Meanwhile, Blake’s Castle served for a time as the county gaol. In 1788, John Howard describes it: ‘Galway County Gaol is near the river. There is a new court but no pump. The criminals are in two long rooms with dirt floors and no fireplace, the debtors have small rooms above stairs.’ The felons were given a sixpenny loaf of household bread every other day. This bread weighed 3 lb 12 oz, and the prisoners often sold their loaf of bread for 4½d ‘to buy potatoes.’

The gaolers’ salary was £20 and on 1 April 1788 there were four debtors and seven felons in the gaol.

In 1807, work began on building a county and town gaol on the site of the present Roman Catholic Cathedral is today.

At the end of the 19th century, Blake’s Castle was being used as a corn store. During the 20th century, the ESB put an ugly substation in there, and the building deteriorated, with only the south wall facing the street and parts of the east and west walls remaining. In recent years, Blake’s Castle was restored as part of an hotel. It became a restaurant in the 1990s, and today it is Costa coffee shop.

When did the Blake family marry into the Forster family?

It's a pity there is no incentive for restoring these type of old buildings. There are a number of them in County Derry, all slowly crumbling back to the clay.