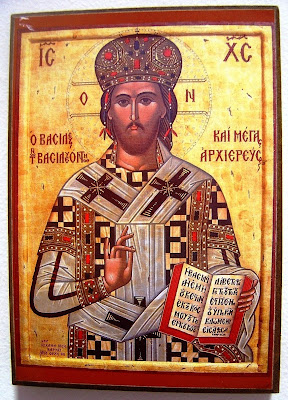 ‘Then they will see the Son of Man coming’ (Mark 13: 26) … the King of Kings and Great High Priest, an icon from Mount Athos (Photograph: Patrick Comerford)

The First Sunday of Advent.

Candles are always a good idea for big celebrations. We use them at baptisms, birthdays and weddings. And today is the first day of the new year in the Church Calendar, the First Sunday of Advent.

New Years start with a countdown. And this morning, we begin our countdown to Christmas.

In these four Sundays of Advent leading up to Christmas Day, we are going to do some things that are new, that are different.

On Advent Sunday, we begin a new cycle of readings, this time mainly from Saint Mark’s Gospel – we are calling this Year B.

On each Sunday in Advent, instead of preaching one long sermon, I’m going to offer three short reflections, looking at the Advent Wreath and Candles, looking at the Gospel reading and our hopes for the Coming of Christ, and looking at the meaning of Santa Claus.

We are going to light a new candle each Sunday on the Advent Wreath.

The first one is a purple candle this morning, representing the Patriarchs and Matriarchs, including Abraham and Sarah, their son Isaac, and their grandson Jacob.

The Anglican mission agency USPG (United Society, Partners in the Gospel) has drawn up a series of prayers, one for each Sunday in Advent, to go with each of the candles on the Advent Wreath.

The USPG prayer to go with lighting this morning’s purple candle prays:

O God of Abraham and Sarai,
whose promise was fulfilled in the birth of Isaac;
we pray for mothers in Tanzania whose hope for their unborn
children is tainted by the threat of preventable disease.
Bless those who work to overcome this threat
so that children can be born healthy and full of potential. 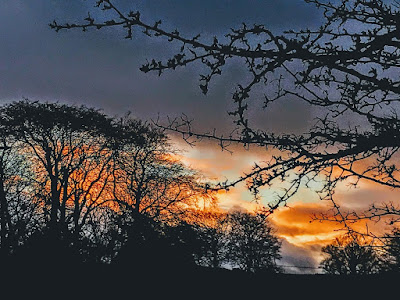 The First Sunday of Advent marks the beginning of a new Church year, and we begin a new cycle of readings, mainly from Saint Mark’s Gospel. But instead of beginning at the beginning, with the first coming of Christ at his Incarnation, we begin with looking forward to his Second Coming.

With the onset of winter, the sunsets are earlier each evening, and the sunrises are later each morning. Late last week, as I was heading out for an evening stroll, there was a clear sunset to the west, and the clouds in the sky were streaked with distinctive shades of pink and purple, with tinges of red and orange.

It was almost a heavenly pleasure.

And I mused, in that idle moment that evening, that if these were my last days then this year alone I have had so many experiences of the love of God in my life and snatches or glimpses of the beauty of God’s Kingdom.

Our Old Testament and Gospel readings this morning are classical apocalyptic passages in the Bible. The passage in the reading in Saint Mark’s Gospel is part of what is sometimes known as the ‘Little Apocalypse.’

We hear of the angels proclaiming the coming of the Son, but this time it is the second coming.

Yet, there is this beautiful image of even the fig tree putting forth tender branches and fresh leaves, even at the end of time.

It is said that Martin Luther was once asked what he would do if he was told the world was going to end tomorrow, and he replied he would plant a tree.

Some years ago, I was given a present of an olive tree and I was hoping to see it grow in our back garden in Dublin. But heavy rains soon fell, and as winter closed in its leaves faded and it was taken away with the rains and the wind (see Isaiah 64: 6).

The dead olive tree was replaced with another one, and now, many years later, it is in a much better state of health. But, if these were my closing days, I too would like to plant an olive tree, despite the immeasurable variations in weather we are experiencing in Ireland in recent winters.

Would you want to spend those last few days closing that business deal?

Would you finish a long-delayed project?

Would you want to take that world cruise?

Would you finish that great novel?

Would you join me in planting another olive tree?

Or would you rise early to glory in the sunrise, listen to the waves rolling in onto the beach, stand beneath the last leaves falling from the trees by the river bank, or prayerfully watch the sunset?

So, if that is what we would do if we were told these are the closing days, maybe we should ask: Why not do that now?

Would you tell your children, your partner, your parents, your brothers and sisters, that one last time, that you love them?

Would you wrap the person you should love the most in one long, tender embrace?

And if Christ comes at sunset this evening, tonight, early tomorrow morning, will he find me sleeping on my responsibility to be a sign of hope and a living example of true, deep, real love? (see Mark 13: 35-36).

Will he find the Church sleeping on our call, our mission, to be a sign of the kingdom, a beacon of hope, a true and living sacrament of love?

In days of woe and in days of gloom, the Church must be a sign of hope, a sign of love, a sign that even if things are not going to get better for me and for others in my own life time, God’s plan is that they should be better (Mark 13: 27, 31).

Advent calls us again to be willing to be clay in the hands of God who is our Father and who is the potter (Isaiah 64: 8), so that we can be shaped into his vessels of hope and of love, so that we can be signs of the coming Kingdom, so that our hope and our love give others hope and love too in the dark days of our winters.

Mark Twain once said: ‘The fear of death follows from the fear of life. A man who lives fully is prepared to die at any time.’

What would you do if the world, your world, were to end tomorrow?

We do not need to wait. We can do those things now.

Finish the work you started. Be reconciled to those who need you. Be faithful to the people and tasks around you. Undertake some small and wonderful and great endeavour. Be a sign of hope. But most of all – love the ones you want to and ought to love.

Why not? For Christ has come, Christ is coming, and Christ will come again, in the name of love. 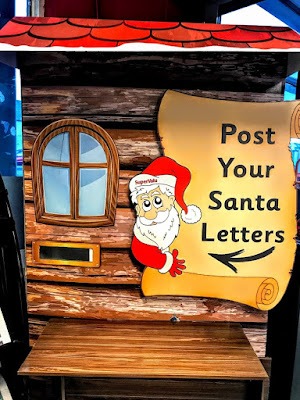 Santa arrived with a loud bang at the Arena in Askeaton on Friday.

I could not figure out what the noise was. I could hear it from the Rectory, and I had to go and see it for myself. Santa had arrived just a few hundred metres from the Rectory.

Over the Four Sundays of Advent, and on Christmas Eve or Christmas Day itself, I want to give five good reasons, five short, crisp stories, why Saint Nicholas of Myra who has become Santa Claus has a good story to tell all of us at this time of the year.

It is worth reminding ourselves that Saint Nicholas is commemorated not on 25 December but on 6 December, even if he does not make an appearance in the Calendar of the Church of Ireland.

Saint Nicholas was such a favourite saint in mediaeval Ireland that many of our principal ports and towns have large churches named after him, including one in Adare, Co Limerick, and one, in the mediaeval era, on Nicholas Street, close to Saint Mary’s Cathedral, Limerick.

He is an important figure, not because of the roly-poly figure hijacked by Coca-Cola and advertising.

Legend says that young Nicholas of Myra was sent to Alexandria as a student. On the voyage home, he is said to have saved the life of a sailor who fell from the ship’s rigging in a storm.

So, Saint Nicholas of Myra, Santa Claus, is a role model for being willing to follow God’s leadings, wherever we may be called or sent on this journey and pilgrimage in life. His willingness to travel, even when his own life was at risk, makes him a role model for the church in mission.

He teaches us to follow God’s leading, that life is a journey, that it is an Advent that leads to an encounter with the incarnate and living God.

(Revd Canon Professor) Patrick Comerford is Priest-in-Charge, the Rathkeale and Kilnaughtin Group of Parishes. This three-part sermon was prepared for the First Sunday of Advent, 3 December 2017.